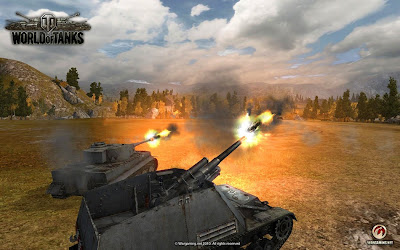 I've been playing World of Tanks for about a week now. With 364 battles under my belt, or a bit more than double my 5th Edition 40K experience, I'm starting to crave some changes to how vehicles work in 40K. Here's my accumulated thoughts.


1) All 40K Vehicles Should Have A Movement Stat

Why, oh why, does 40K treat every vehicle the same in terms of movement? Why do we only have a couple of ways (Fast Vehicles, Lumbering Behemoth) of differentiating movement? Having a stat would let us have additional tradeoffs when fielding certain units. Want to get there fast? Take a Rhino. Want to stick a weapon on the Rhino (Razorback)? Then you lose 2" of movement.

2) Turning Should Slow You Down - A LOT

Tanks should never be permanently immobilized, except by an enemy shot. Instead, a tank that fails a difficult terrain test should only lose one turn of movement.

As for the tests themselves, they should be easier to pass if the tank is going faster, and harder to pass if it's going slower. Say a 6+ if you move 7+", and a 4+ if you went more slowly or started your turn in the terrain.

For light wheeled vehicles like Trukks, it should be a 4+ for going slowly and a 2+ if moving fast.


4) Tanks should be easier (and harder) to hit

For infantry shooting at tanks, it should be a +1 at long range (over half), and a +2 at short range. Immobilized tanks should be a +3.

For tank-on-tank, the bonus should also be +1/+2, with a +0 if you're within 6" of the target. Because when you're bumper to bumper it's pretty hard to hit unless the other guy isn't moving (+3). Tank Destroyers (Vindicator, Medusa), should only hit moving targets within 6" on a 6+. Because if a turreted tank gets that close to you, it's over.

For artillery-on-tank (Basilisk), it should be +0/+1 when firing directly. Because they're designed to hit targets indirectly. Otherwise they would shoot like Tank Destroyers.

5) All Tanks Should Have Ammo Options

Russes, Medusas, and Vindicators shouldn't just throw large blasts, they should also be able to shoot direct-fire armor-piercing rounds instead. It makes no sense that a Russ can't meaningfully hurt another Russ with it's main weapon.

So let's give them all single-shot anti-tank shells that can hurt other armor. A long-barreled tank like the Vanquisher could just be more accurate or have a higher penetrating power.

In addition to this, let's have different classes of AP1-like penetration. There should be shells that offer a +1, +2, or even a +3 to the roll on the vehicle damage table.

Here's what I'm thinking. Whenever a vehicle is damaged (Stunned, Weapon Destroyed, Immobilized), the next time that it's shot, the damage roll STARTS from there.

So say a Chimera takes a lascannon pen to the front and is stunned (roll of 2). The next time it's penetrated the enemy gets a +2 to it's damage roll. Meaning that it only needs a 3+ to destroy the tank instead of a 5+.

That would go a long way towards making vehicle damage less random.

Thoughts?
posted by SandWyrm at 1:29 PM