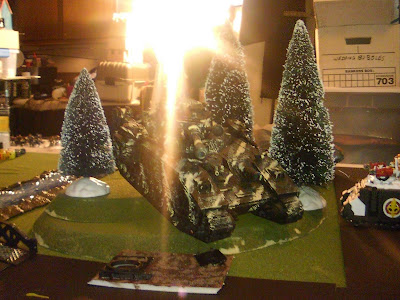 John and I decided to play a 2500 point Apocalypse game to test a potential Apocalypse tournament he wants to run in the future. We had a blast with a the rules basically being 1 superheavy with no D weapons. The game came down to the wire....


The game was 2500 points each side.  We had the 3 objectives each placing them in our deployment zone, no man's land, and each other's deployment zone. 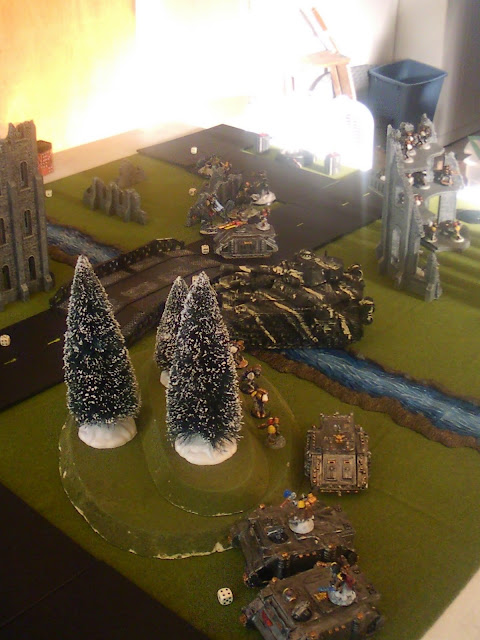 Side angle of my deployment.  Battle leader and rune priest in Rhino's with Grey Hunters at the bottom. Multi Melta Longfangs with Rhino, Baneblade, Las/Plas Razor with Flamer Grey Hunters,  Longfangs, and Thunderwolves, from top to bottom.


We decided to deploy both sides, set up objectives and then roll for who went first.  I won the roll to set up first and he won the roll to go first.  He moved his Super Tank forward and roasted all the multi melta longfangs except 1, and glanced their rhino.  He shot 26 ap 1 missiles into my Thunderwolves and killed everyone except the Lord and the TH/SS Thunderwolf. He moves his repressors up on the road and popped smoke. His Immolaters wrecked my Rhino with the Battle leader and shaked the Rhino with the Rune Priest.

My turn 1, I dropped Right next to the super tank and Exorcists.

The Supertank moves forward 6" shooting at vehicles left and right doing nothing. The main cannon drops a template on the zealots in cover and kills 8 of them!  They make their leadership test before being charged by the Thunderwolf Lord loosing 5 more before swinging back and doing 1 wound with their eviscerators. Longfangs, Lascannons, everything shoots at vehicles! Nothing goes thru armor.  Looking sad already.
My 2 Gh packs move towards the 2 Immolaters to assault them and fail to damage 1 while only shaking the other.


The rest of his turn 2 he moves his supertank and roasts 6 of the 7 GH pack and only leaves the wolguard with bolt pistol and power weapon.  His Exorcists cannot shoot this turn so move to the back corner to get cover and away from my baneblade. He moves one repressor to block my baneblade and the other one is stunned.

posted by Spaguatyrine at 2:08 PM