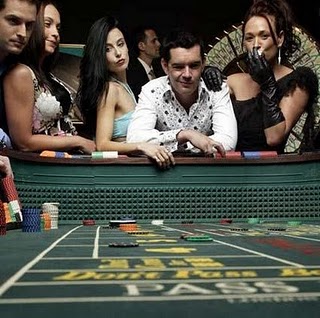 Mike Brandt wrote something yesterday as a comment to my post on dice over-rolling in 40K that I thought deserved a detailed reply. Since he's made the same comment before when I was discussing the Random-ness of Orks. Where I think that he is confusing the benefits of rolling dice in Parallel (all together at once) with rolling dice in Series (one after the other).


This is old now, but, a greater # of dice roll sets between beginning and ending the determination of an attack, with generally better odds for each roll, is infinitely superior in terms of establishing reliability than having single or fewer dice rolls per attack, with worse odds.

That's kind of the important thing ... the games like warmachine and others where they basically roll a single dice per attack per model, with a target # to do damage or not, are BAD in terms of reliable tactical games. Less #'s of dice rolls lead to lower statistical reliability, and thus a streakier game, and one harder to balance, etc. etc.

Can you fit 35-40 Chessex dice in your hands in a pinch? Sure! But then you're just dropping them (with a zero-rotation shake-rattle or two), resulting in the lack of even a pretense of rolling them randomly. Whatever they were when you picked them up is what you'll end up "rolling".

Are you having fun double-checking your opponent's math when he rolls 18, 18, and then 12 dice for his attacks (with re-rolls)? I'm not. Half the time I could be cheated blind because I just take their word for the results. Do most players narrate their actions well enough that you can follow their split-rolling? No on that too. It's a skill that you have to learn.

So simply as a matter of playability, I consider 20 dice to be a hard limit that we really shouldn't go over except in the most odd of exceptions. Probably not even then. Rolling more dice than that slows the game down and contributes only marginally to the "fun".

As to your other point...

Rolling Dice In Series Does Not Increase Or Decrease Reliability


...a greater # of dice roll sets between beginning and ending the determination of an attack, with generally better odds for each roll, is infinitely superior in terms of establishing reliability than having single or fewer dice rolls per attack, with worse odds.

You need to do a better job of reasoning this out Mike. If the resulting odds would be the same rolling 2 dice as one, then why not just roll one? You can roll this example as many times as you want, but the odds will be the same no matter how often you do. The only reason to roll more dice is if one or more of those dice can have modifiers applied to it. Or if you want to curve the outcome so that certain results are more likely to happen.

Because there are downsides to rolling multiple dice in series. Especially with an auto-pass/auto-fail system.

Rolling Multiple Dice In A Series Narrows Your Success Range!
Let's look at the example of some poor BS1 Grot shooting a S2 pop gun at a Terminator. He needs a 6 to hit, a 6 to wound, and the Terminator will save on a 2+.

Now let's consider what would seem to be the inverse: Dante's chances of frying one of the new Sisters of Battle (6+ Invul) with his Infernus Pistol...

That's not much of a top range. Dante is just short of 60% in his likelihood to kill that Space Nun. Under GW's system, a 1 is always a failure. So even if Dante is shooting his Infernus Pistol at an unarmored grot point-blank, his chances can't possibly get any better than...

Well, it's all about the compounded effects of rolling dice in series. The more dice you roll with auto-fail results, the lower the probability of your best shots. Let's imagine that the Sister of Battle in the example above also somehow got a 6+ Feel-No-Pain roll... 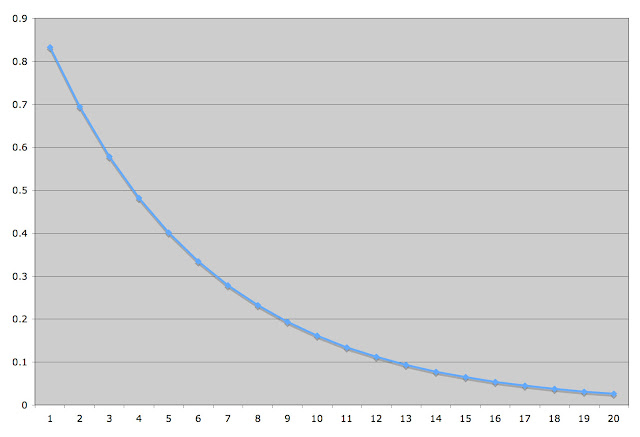 The chart above shows the results if we were to take this phenomenon to it's ridiculous extreme. At 20 rolls in a series, we would have only a 3% chance of success even if each individual roll succeeded on a 5+.

Rolling Dice In Parallel Does Increase Reliability
What will increase your reliability is rolling multiple dice in Parallel. That is, rolling more attacks at once.

This chart illustrates it nicely: 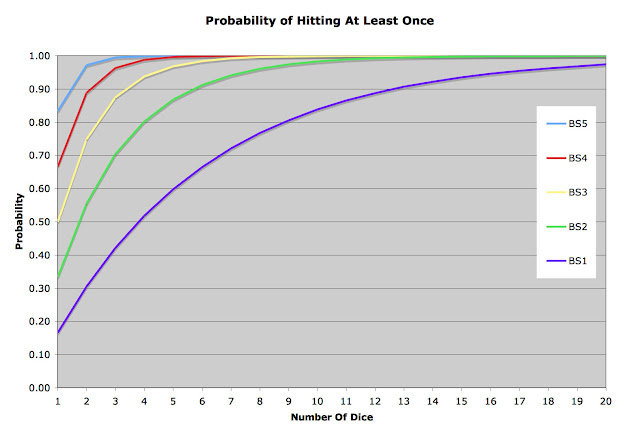 The probability never reaches 100%, it just gets closer and closer to zero on a curve that gets flatter and flatter.

Conclusion
I hope that I've illustrated the fallacy that rolling lots of dice is always more reliable. HOW you roll those dice, whether in parallel or in series is just as important to the outcome.

I hope this also illustrates the stupidity of having automatic passes on a 6 and automatic fails on a 1. The former produces results so fine grained that we waste time rolling buckets of dice for the smallest of chances. While the latter compresses our odds of success into just a fraction of the range that a D6 system can offer.
posted by SandWyrm at 12:59 AM