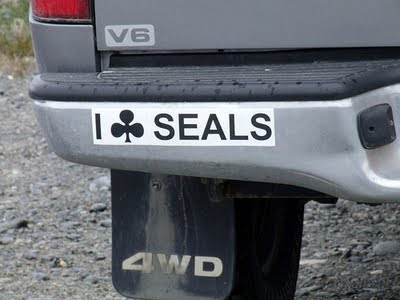 As an aside: Riddle me this one Batman, who in the hell names himself Chosen1 and then goes on to be an inbred lapdog to a rotting corpse in a golden fishbowl throne?  Is there irony that in that name that has just gone over my head or did I miss some thing else?
At this point with two Major wins but no massacres both of us believe that we are out of the running for the top three, so we decide to have a casual fun game rather than following the spirit of the Win at All Cost tournament.  A point I should note here is that the TO had intentionally mixed up the tables and asked us not to share our records in an effort to stave off any gaming of the last round.  The end result was that it was well after the official start of the round and we still hadn’t started the match rather we were trying to weasel out of Dawn of War as neither of us wanted to play that mission.  After finally getting disgusted with us the TO informed us that we are playing on the second table and that we could screw up his tournament if we didn't play the damn game soon.  Feeling some what chastised with an annoyed TO watching we roll of for first player.  Chosen1 won the right to choose, and chose for himself to choose what side to start from. 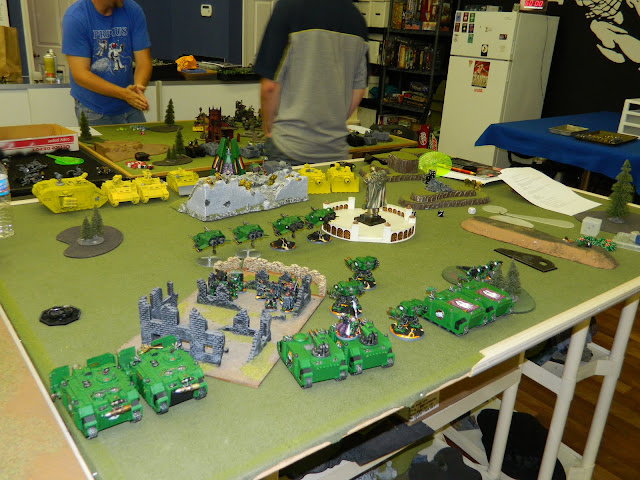 That was probably the last time the dice fell in his favor that game.  Remember the weighted dice?
Pro-Tip: don't buy your weighted dice from Acme. 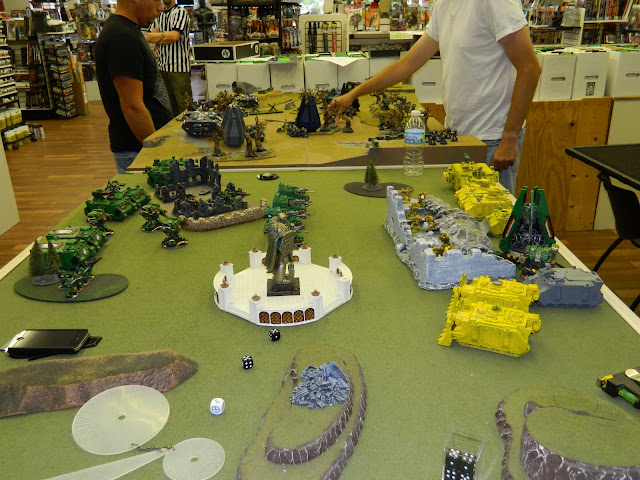 If he hit with a twin linked melta weapon (and that was by no means certain even in his Vulcan list) Chosen1 would roll double ones or at most three on two dice for armor pen.  The first two turns of the game saw him failing to hit or penetrate anything.  For two turns his full army shooting firing into my vehicles was not able to get a single roll on the damage table.  At turn three when he finally got two rolls on the damage table it was only to stun my two razorbacks.  This game was a blood bath I had completely tabled him at the end of turn six and only given away 318 vp in return. 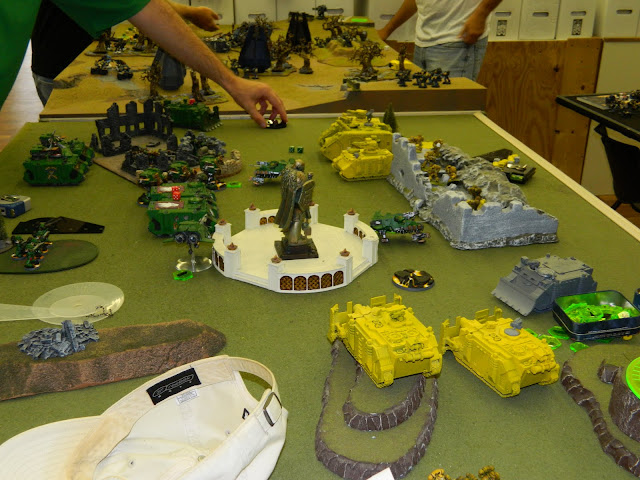 What should have been a painful game to play through was best game I have played in a long while.  No matter how horrible his dice went Chosen1 kept at it and we both laughed at the absurdity o the game.  Several time He had me double over in laughter at which point he would start chiding me that if I didn't get up I would run out of time before I could massacre him.  Other than bringing the spite of the dice gods along with him I saw no tactical mistakes all game.  As the rounds wore on he kept  drawing back into more defensive positions and focused on my faster mobility to buy him self time.  In fact he pulled of a tactic that I had never seen before something that he dubbed the speeder wall.  Seeing as he has his own blog I will let him go over the process and not step on his very large feet.  Not only would it have stymied my mad dash forward if chosen1 had rolled average, it had the real potential to cripple my army had he rolled slightly better than average.  Even though the game was completely one sided I picked up something that has me rethinking my fast attack slots.
End Result:
Massacre in my favor
The MVP:
Vanguard Vets, I am guessing that they heard me talking about giving up their spot in the foam for some scouts and decided to pull out all of the stops this game.  By memory alone they accounted for a tac squad, a vindicator, a rhino (pinning the guys inside), and two dreadnoughts.
The Goat:
Um, my opponent’s dice?
Final results:
As it turns out while Chosen1 was doing his level best to make me wet myself the top table was busy kicking the tar out of each other.  The beating that I handed to Chosen1 put me solidly in first place while one of the top two dropped to fourth and the other coming in second.  I had not walked into the day looking for first, rather looking to spend the day playing games.  It was definitely a good time with a very well run tournament populated by mostly good players.  In all honestly my final placement was just icing on the cake, I would have walked away just as happy at the bottom of the pile.
posted by Farmpunk at 7:00 PM