Rumors From The Salt Mine 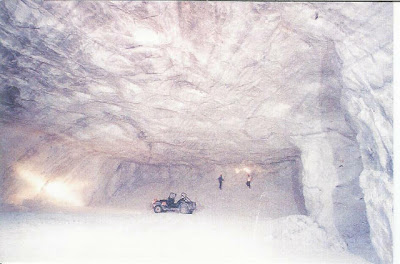 BoLS posted a bunch of rumors from their lounge earlier today. I'm not going to repeat them here in their entirety, but there are a few things that I think are worth commenting on.

"As we get towards 6th edition, some things are rumored to be changing. White Dwarf is rumored to be going back to what they had before, with more battle reports and painting how-tos and less advertisements. Sisters of Battle is the poster child for the 'White Dwarf Codex' which may be getting more full-on Codices in the future depending on popularity. One such example would be for the Chaos Legions Codex, which would have a core, and then White Dwarf additions for other Legions as the months progress."

Define "before".  White Dwarf has sucked since at least the turn of the century, maybe longer. I don't doubt that their new editor wants to make some changes, but I'll believe this when I see it. There are still idiot higher-ups calling the shots.


"Oh by the way, Chaos Legions by March 1012 and 6th edition by October 2012, which will feature Eldar as the poster child. Heavy Xenos influence for 6th edition, including the long-awaited Tau update."

As a general development strategy, that would make a lot of sense. But this is GW we're talking about. Strategy? What's that? We just do everything by trial and error!

Chaos needs love and attention from the design team, sure. But a Legions dex? That's only ever been a fan wish. Mini-dexes on a regular basis? That would be smart, but it goes against GW's entire business model. If Kirby had left the company last week, I might entertain the thought, but with him (and Jervis) in charge they're not going to rock their boat one damn bit.

"Here's a doozy. Fluff changes. (prepare for heavy summary) We're moving on from the 41st millenium into the 42nd."

God, that would be a dream come true. But we've seen nothing from GW that even hints that they're looking to move the fluff forward. Pure fan wank.

"Now here are some other things that are founded in reality: Matt Ward? Gone. Don't expect him to be writing any more Codices. His baby was 5th edition, and now that 5th edition is up, Ward is done. Board Members for GW? 3 of the old geezers gone. Company-wide changes. Everything since Tyranids? Made for 6th edition."

As much as I dislike Ward's work, that would be unbelievably stupid. Which is why it's probably true. Cruddice can just write everything, right?

Is Kirby off of the board? That would be something to celebrate. IF (big if) true, then GW's numbers for this quarter must really be in the toilet. That's the only thing that would shake up the company to the degree required to make even half of these rumors true.

"Speaking of 6th edition again, the main rulebook that comes out is supposed to be 'the book to rule all books'. It'll have ways to include Superheavies and rules for Fliers in regular games, and should errata a lot of rules in Apocalypse, past FAQ's, and past Codices to make it all fit together. It'll have updated stuff for Planetstrike, Cities of Death, etc, perhaps even to make room for more expansions in the future."

This is exactly the sort of stupid centralize-everything idea that thrives in big dumb corporations like GW. So I believe it's probably true. Just look at what's happened to fantasy. It fits.

"Ugh. The person I heard this from is a good friend and reliable source, and the person *he* got this information from is an unnamed employee of a certain facet of our favorite gaming company that deals with items made out of a material that is notorious for melting if exposed to direct sunlight and heat."

Yeah sure, because GW routinely shares all of it's development plans with the casting department. :P

"By the way, all those rule sets that Forgeworld has been making? They may suddenly find themselves approved for regular games."

Not even GW is that stupid. Besides which, Forgeworld doesn't have ANY respect within GW management.

"...Also, Chaos Marines have been a group of much attention. The Horus Heresy novels, Black Crusade RPG, and features as main villains in many a video game. They have a lot of new fluff that hasn't been explored before, and a lot of new material has been created that has kept them in the limelight, even if they haven't been on the gaming tables..."

This is true, but that doesn't mean that GW is developing a legions dex. They can barely keep up with the books they have. And do you really think that GW HQ pays much attention to the Black Library guys? I have it first hand from Abnet that they barely interact.

You have to look at it from a development resources standpoint. GW simply doesn't have enough designers still working at the company to create a new book from scratch. They used to have 6+ designers for each system. Now they have 3 designers for all systems. Is it any wonder that their Fantasy books are copy/paste from the last ones? Or that more effort is put into the graphic design of the books than the rules themselves? If Ward really is leaving do you think that the situation will improve?

Now, might they be working on a re-vamped Chaos codex with special characters that unlock rules for 4-5 of the legions? Sure! But don't expect more love than that.

"...There are a lot of other things that simply don't fit. We've already heard rumors about fliers, but the superheavies thing is a stretch.."

GW has big expensive models sitting on shelves that it wants to sell to players. It's not a stretch at all.

"'One book to rule them all' is a bit of a stretch, as that would cannibalize all of the books that have already been printed."

Do you think KirbyCo cares if you have to buy new books/models? Look at it from a matter of incentives. If rumor X requires them to hire staff and spend more on development, it's probably false. If rumor X means short term financial gain at the cost of long-term growth, KirbyCo will be all over it.

"Also, Forgeworld being brought into the fold doesn't make sense either. Though they've been pumping out a lot of new stuff, their business model is built as a boutique, and if they suddenly shift gears to mass-produce their stuff to satisfy the new net lists that come out, then that will completely undo their business model."

I could see a consolidation of manufacturing facilities taking place. Whether that means a merging of Forge World with GW-Proper... Well, I wonder what Forge World's numbers are like right now. That would be the deciding factor.

Thoughts?
posted by SandWyrm at 2:56 PM