Everybody loves a Batrep! 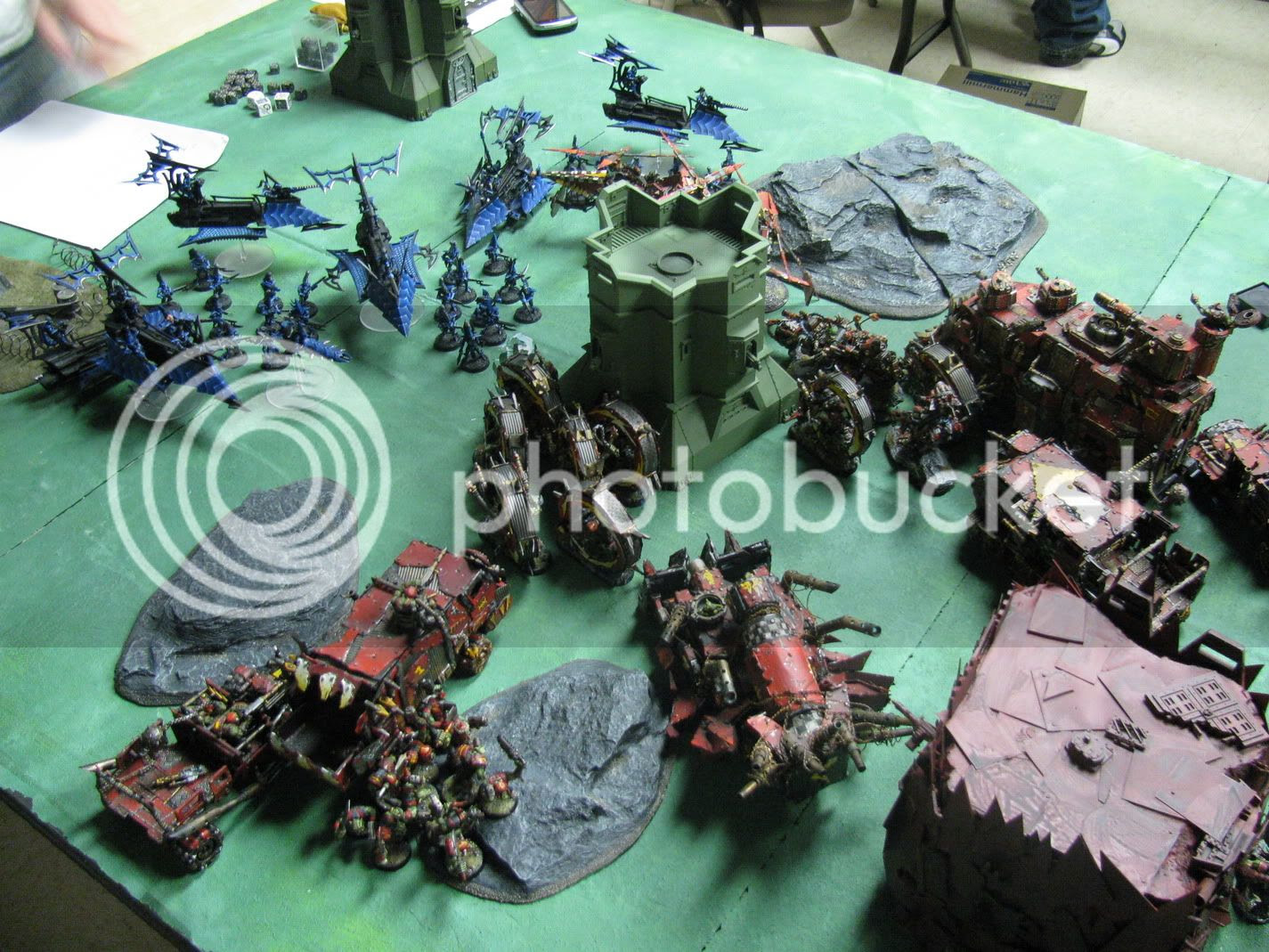 A while back (I won't say how long, because I don't want to give you any ideas on how lazy we've both been with getting this finished) I played a game against a Uberdark's Speed Freeks. And if you don't remember this army from a while back, shame on you.

The game was a specialty scenario, using three objectives (the three bastions) and good ol' Victory Points. We ran the game at 1500, trying to allow for extra time for pictures and such, but we still had to call the game after 3 turns... but a bloody 3 they were. Deployment was Quarters, and the Orks won first turn. And the icing on the cake? Night Fight was in effect. 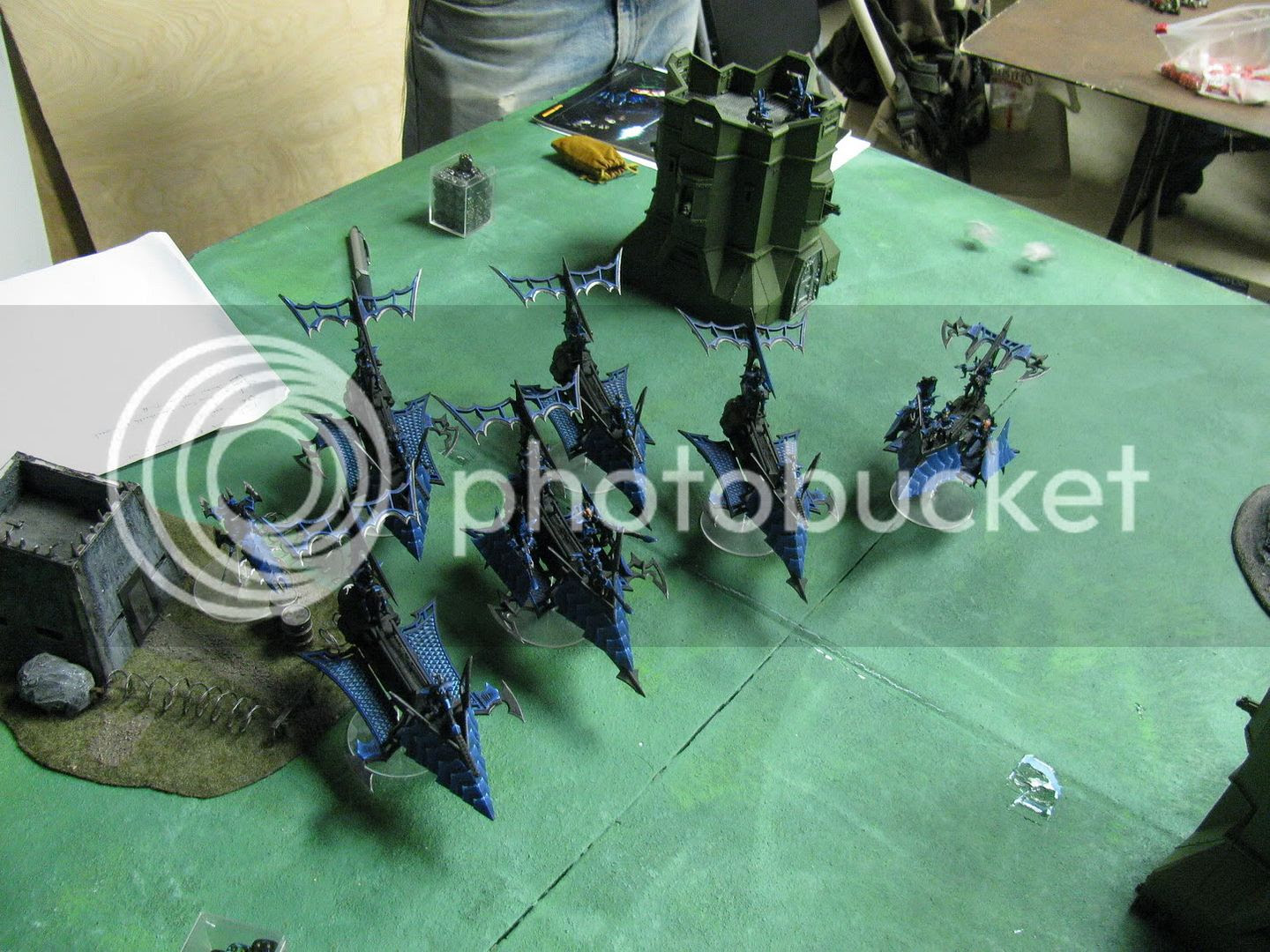 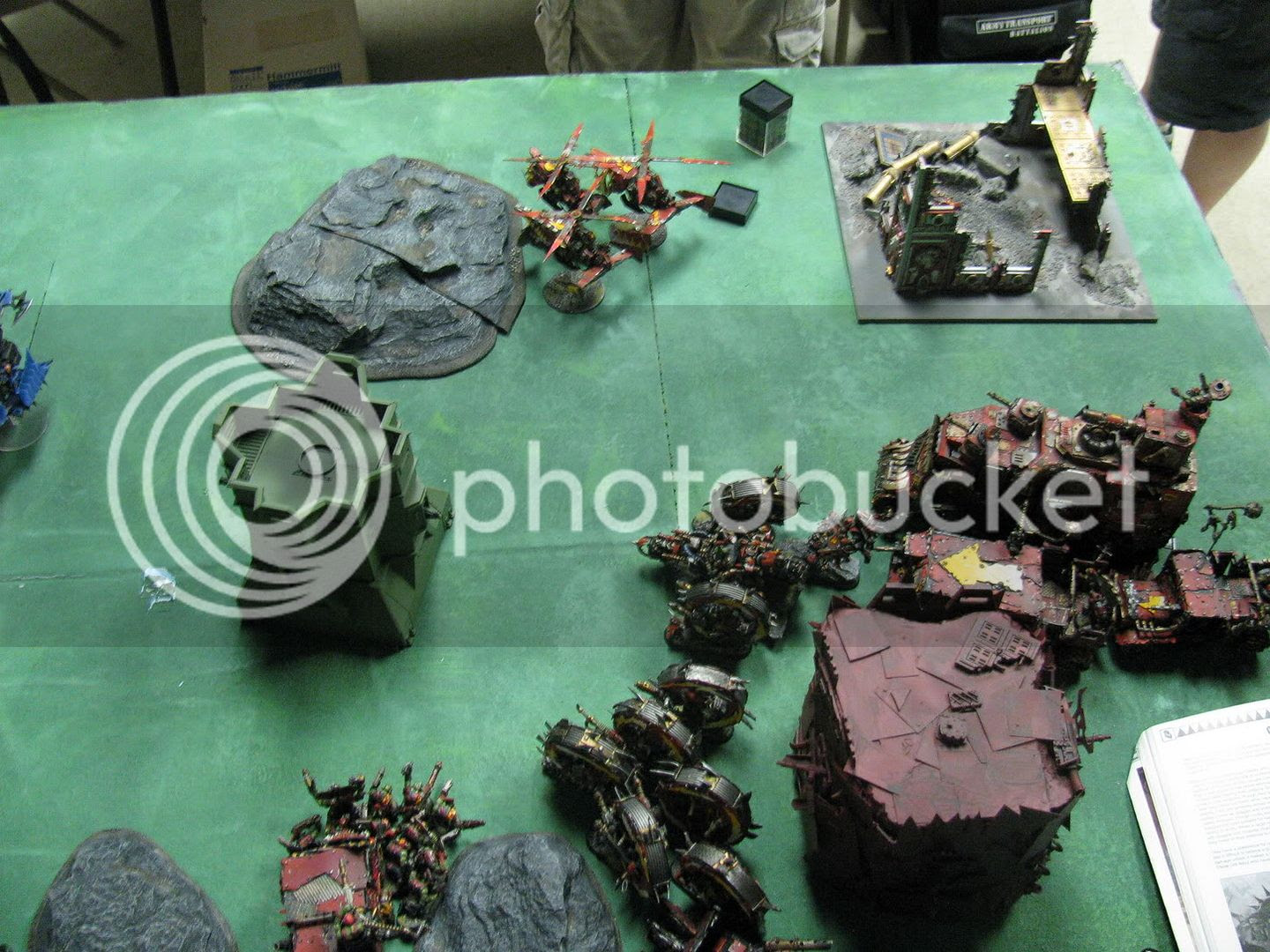 The Orks rev their engines and get ready to run up on some pointy ears, but the Eldar use that Init 5 to rev theirs first - Dark Eldar Seize!

The Eldar advance, preparing to lay into armor that is, for a change, as light as their own. The pirates cackle with maniacal glee as dark matter bolts slice through the air, cutting down orks and armor alike.

The Raiders manage to destroy one trukk and knock the big shoota off another. The Ravagers then decide to join the party, with one targeting the orks that had just piled out of the destroyed Trukk (turning into a vaguely green colored slag) and the other having a wonderful time hitting, but a terrible time doing anything with it - 3 hits result in 1 glance, which keeps it from shooting thanks to Extra Armor.

The Freeks are hardly bothered by a few of their fellows being melted, and charge heartily into battle.

The Koptas moved in on one flank, ready to get rid of that pesky Ravager, while the Bikers wheeled toward the advancing Raiders. Both have a lovely time shooting, ripping, and otherwise destroying some ancient Eldar anti-grav technology.

The Looted Wagon fires on the remaining Ravager, but misses. Wazzdakka himself tries to find a target, but his beady little eyes can't find a target in the darkness! 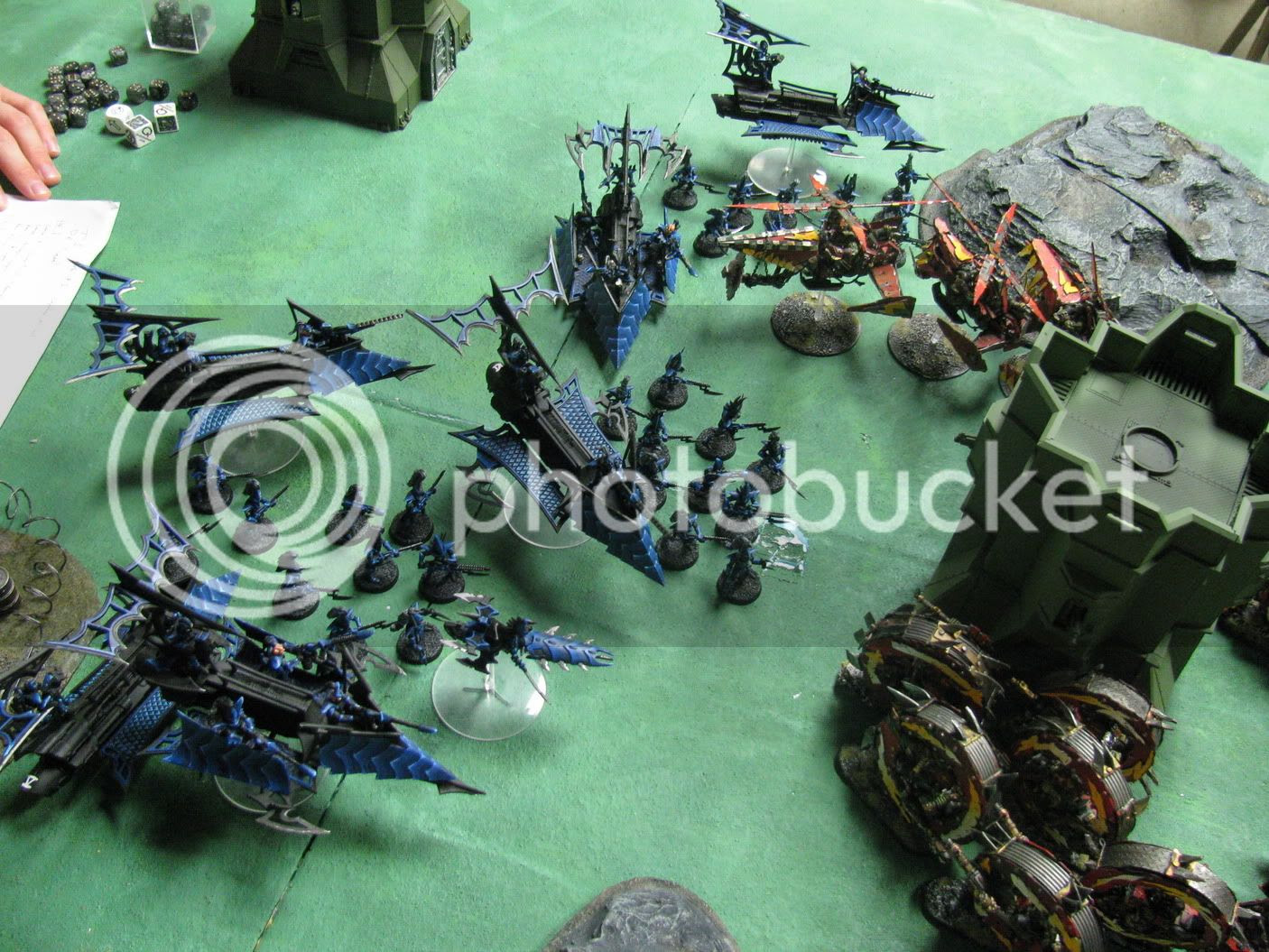 The Dark Eldar advance on the greenskins, preparing to taste blood.

Combined fire from the warriors holed up in the bastion, a Raider squad, and the Wych's Raider only manage to drop a couple of Koptas. Those blasted things kick up so much dust it's almost impossible to see!

The remaining Ravager has better luck against the Looted Wagon, and manages to immobilize it and keep it from shooting for another round.

A lone lance takes aim and fires at the Battle Wagon, but the Mek laughs heartily as his force field deflects the blow.

More warriors run forward, ready to make up for some lackluster shooting. The Koptas fall back, but not far enough - they get caught in assault and subsequently wiped in their confusion. The Dracon, not to be outdone by the Mek's performance, hops up on drugs and charges in with some Warriors to rid the area of the local fungi infection. Unfortunately he forgot to read the surgeon general's warning, and took one too many... good thing he still has a wound left!

The lord clears 3 bikers, and the Warriors drop another 2. The Orks decide they've had enough of this silliness, and bat three of those pansy ears out of the way. One even gets ambitious and tries to take a swing at the Dracon, but the Shadow Field is too powerful to be breached. The orks decide to hang around until next turn and try again. 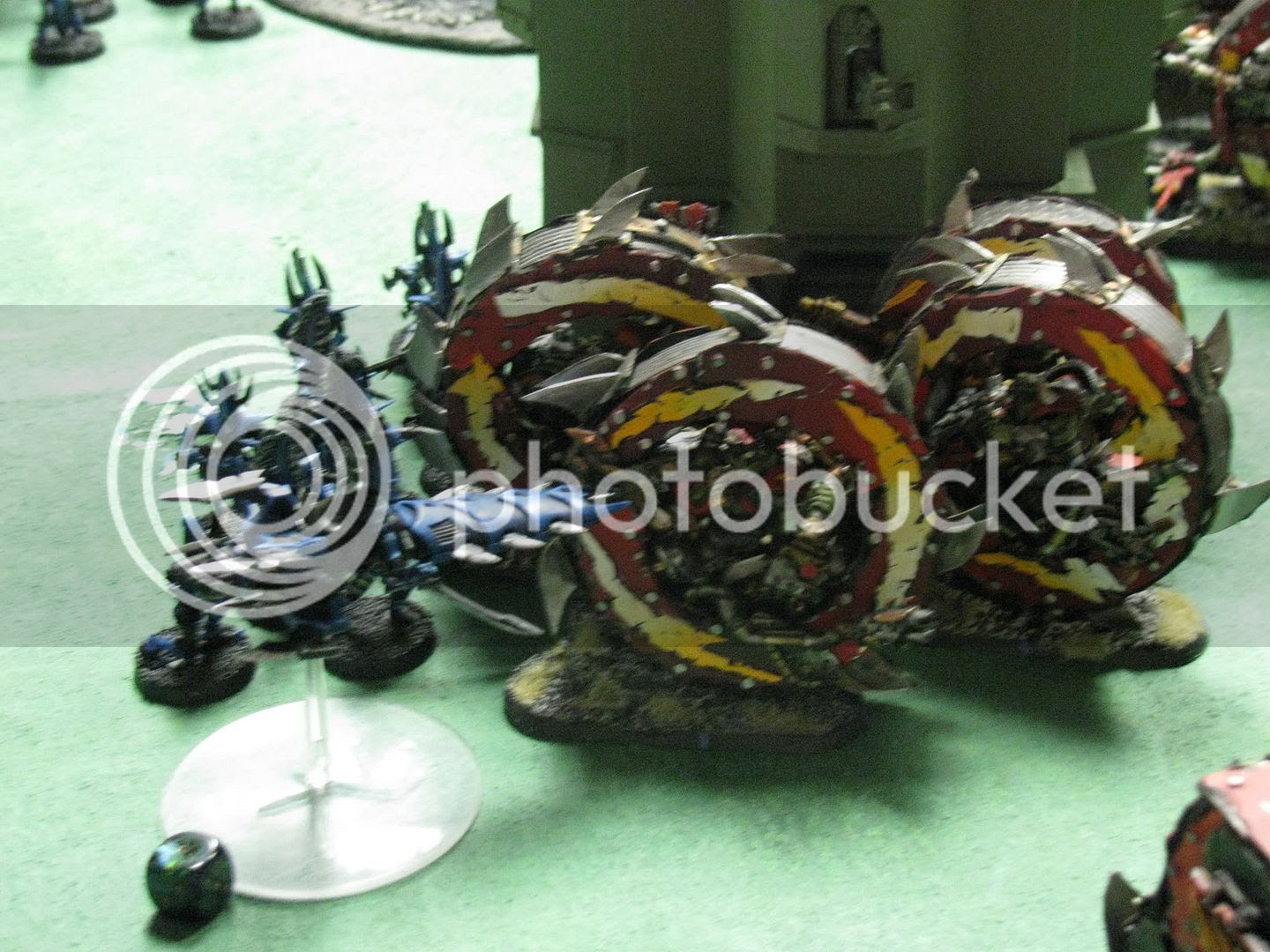 After watching the pointy ears having so much fun getting close, the Orks decide to go in for a group hug as well. Starting with the tanks.

A trukk tries to run over some warriors (didn't realize until later that it wasn't actually a tank, and as such couldn't do that whole "tank shock" thing), but they figure it's a better idea to just sidestep out of the way. The battle wagon, however, is a slightly more imposing piece of metal, and causes a Warrior squad to fall back.

With a bellow only matched by his weapon, Wazdakka blows the armament from one of the raiding craft. One of the orks follows suit, and downs another Raider with his big shoota.

With this, the Orks give a holler and charge in to combat, ready to tear some pinkies (blue-ies?) to shreds. The Mob manages to overpower the Dracon's field, but not before he finished off the last of the bikers. 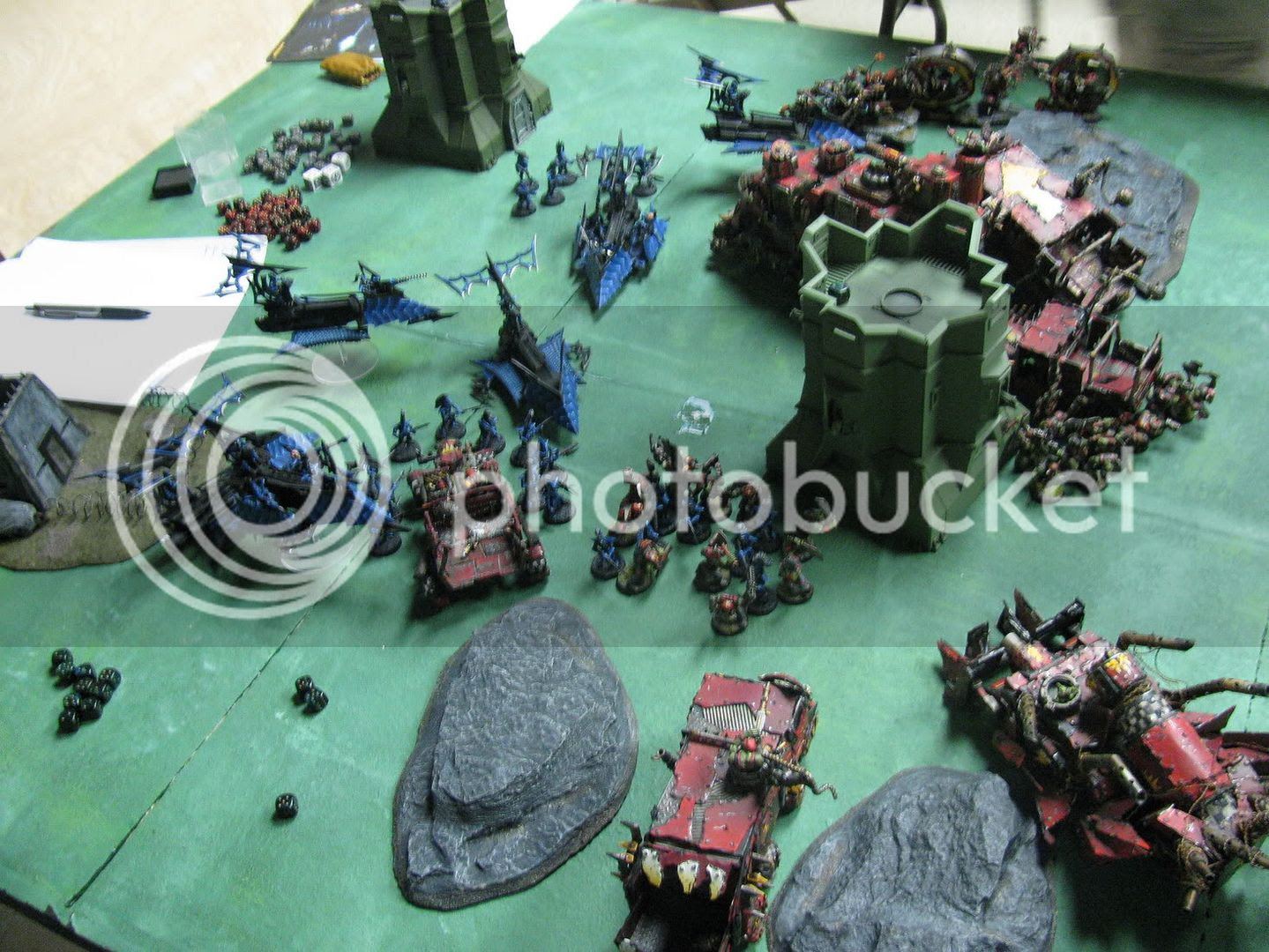 The Warriors falling back decide to get back into the fight (maybe they think they can snatch up the Dracon's soul if they're quick about it). The Wyches have their eye on Wazdakka, and move into position.

Shooting is rather uneventful, as everybody's flashlights lost power and they couldn't see anything. That is to say, aside from the one lance that, once again, couldn't get past the Kustum Force Field.

The Wyches, having waited patiently (a hard thing to do for such a bloodthirsty group) for the prime time to strike, move in on Wazdakka and his ilk. Most of the squad, succubus included, gangs up on the orkish monstrosity, managing to down him before any of the hulking things can blink. Once they notice, though, the Nobs lay in with a flurry of 9 attacks. Nimble as always, the Wyches dodge all but 4, and only 1 lands a wound! Agility prevails as the gladiator skirts out of the way, leaving the Nobs with a hefty leadership test. One dice roll later, and the Orks are being cut down and caged as they try to escape. All 3 nobs are taken as slaves - and even the mighty Wazdakka is dragged back to the Dark City!

Meanwhile the remaining Warriors and Orks duke it out - the Orks pull ahead, but the Warriors stand strong. 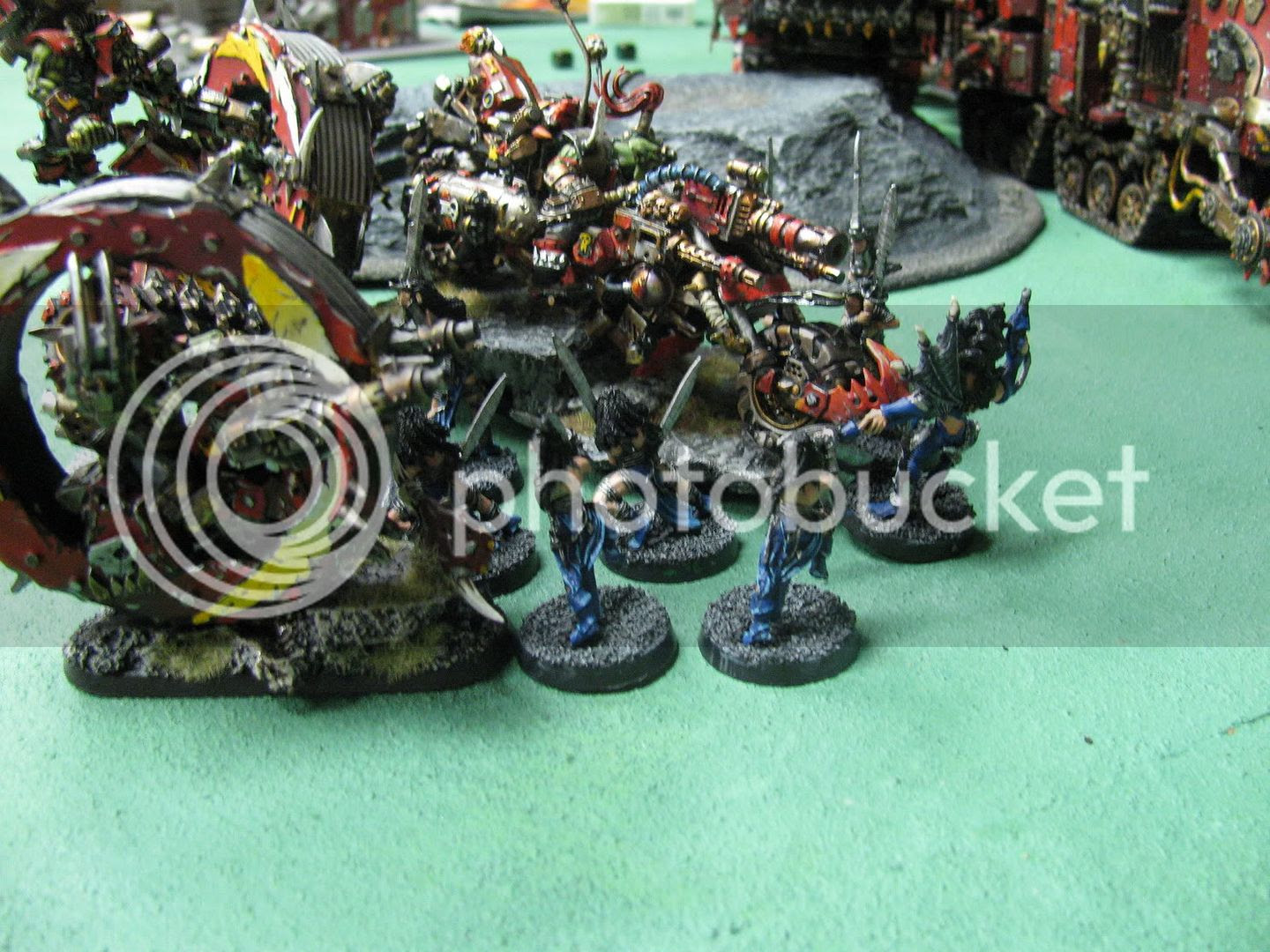 Stunned by the loss of their leader, the big shootas 1/2 an inch away from the Wyches sputter uselessly (okay, they managed to drop one). Luckily the Big Mek never thought much of him, and with the help of his hulking death wagon dropped 7 of them. Heightened by their latest prize, however, they stood their ground.

The Orks on the middle bastion jump up to try to tear all the important looking bits off the bottom of the Raider contesting the objective, and were able to immobilize it.

The whirling melee between the Warriors and Orks continues. The Dark Eldar drop 2 more boyz, who then rile up and drop 5 of those pansy boys. Fueled by pain, however, they still hold their ground. At this point the game was called - each of us held one objective, and the middle was still contested - so it came down to VP's from kills. The Dark Eldar had given up 660, and the Orks had given 1019 (plus another 4 from slaves).

With a difference of less than 400 points (remember, by those rules within 10% is still a tie), the DE have it! 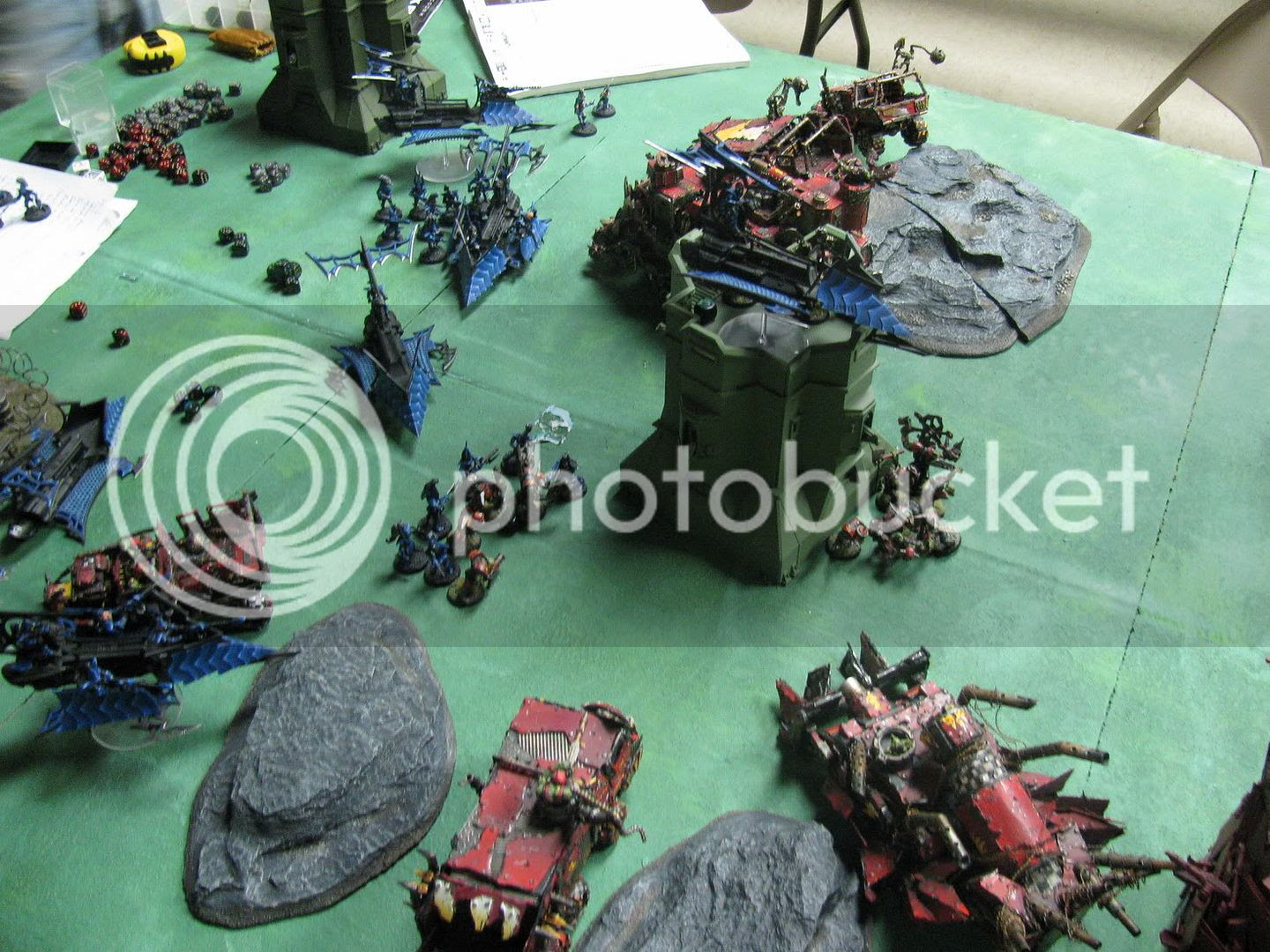 Had the game continued, it really could have gone either way from there. I had a very tenuous hold on the middle objective, and dropping that one Raider would have given him another 500 points for the objective. That alone would have tied the overall points, let alone whatever else would have dropped in battle.

I tend to enjoy old school VP games - I think it gives a bit more tactical flexibility to the players. Sure, in an objective game now you can try for a complete tabling of the opponent, but it's all or nothing. With this style you can actually focus on causing as much destruction as possible without having to completely remove your opponent from the board. On the other hand, a few lone survivors holding key points can still tie you the game, if not win it outright.
posted by Anonymous Foodie at 10:29 PM