Battlefront Shows GW How It's Done In case you haven't heard, the new edition of Flames Of War is now upon us. Giving Battlefront a chance to show GW how to properly release a new game edition. Let's list some of the ways they rock...

1) Nobody Saw It Coming

GW may be trying to lock down on it's rumor leaks, but when Battlefront announced the new edition just before Christmas, it took the community totally by surprise.

Note though, that they announced before Christmas for a release in March and free goodies in early February. So everyone has had plenty of time to get excited about the new edition. That's much better than some dodgy rumors for 6-12 months, and only a week of warning before the product is on the shelves. 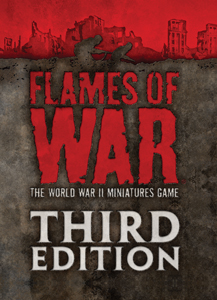 2) They're Giving Away Free Rulebooks To Existing Players

That's right, A free rulebook! If you take your 2nd Edition book to your local game store, they'll put a sticker on the cover and hand you a brand new 3rd Edition mini-rulebook. It's the same size as the mini-rulebook from the 40K Assault On Black Reach starter set, but about twice as thick.

3) Battlefront Released A "What's Different" Guide To The New Edition.

This is, by itself, almost as good as the free rulebook. Instead of having to carefully go through each page of the rules looking for changes, you can just download this PDF. In it, you'll see a quick summary of every changed rule and it's page number in the rulebook.

Taken in total, this is an amazing way to release a new edition. You reward the existing players with free stuff (quelling any grousing over the changes), while you move everyone to the new edition much faster than if your player base trickled into it by themselves. That builds excitement and gets the new model sales going far sooner than they otherwise would.
posted by SandWyrm at 10:05 AM

Email ThisBlogThis!Share to TwitterShare to FacebookShare to Pinterest
Labels: Flames of War, Sandwyrm