Does 40K Have Too Many Actors? 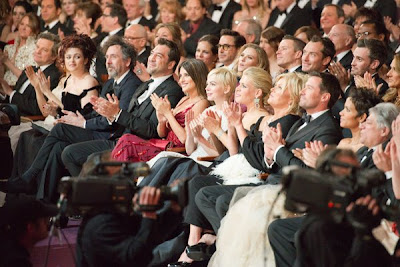 The question sounds strange, sure. But it's a simple one. Does 40K have too many discrete units (actors) to comfortably keep track of over the course of a typical game?

This idea came to me after a discussion I had with Farmpunk, where we both remarked on how much less draining Flames of War is to play than 40K. It's not unusual for me to go home after a hard-fought 40K match and need to veg out for a while. Much like I would after a hard night of computer programming or some other task that requires a high level of concentration.

Yet, the same is not true of Flames, although the number of little army men and tanks involved is about equal. It's not that the rules for Flames are simpler. Both games have a similar level of rules complexity. And anytime you have more than a small number of infantry, Flames will take nearly as long to play as 40K. But Flames organizes it's armies/units differently. Which is where I think the important difference lies in regards to how draining they are on a player.

Let's illustrate this idea by looking at some lists:

From an interaction standpoint, this list has 8 actors. Five Sanguinary Guard units, and 3 Speeder units. If I wanted to, I could split Dante and the Sanguinary Priests off from the other units mid-game. Which would make the total number of actors equal to the army's kill points, at 11. In practice though, the priests want to stay with the squads. So the total is really 9.

Nine things to keep track of. Plus however many actors the opposing army has. All moving, shooting, and assaulting each other.


That's 67 Infantry and 11 tanks/skimmers. Many IG lists boast more tanks than this by using platoons instead of vets.

When deployed on the table, this list has 11-13 actors. Depending on whether the Demo Vets get blocking duty or if they get put inside the Vendettas. But that's not the whole story. If needed, this list can split into 20 separate actors mid-game because of the transports. If I'm fighting say... the Emo-Wing, that's 29 separate actors to keep track of during the game. Twenty nine "things" running around doing stuff. All of which has to be thought about when moving/shooting. How many times have I stared at the table for minutes at a time, working out all the possibilities before I acted? Too many times to count. No wonder I always felt like the Emo-Wing was a more 'fun' list. It wasn't as draining for me to play. :)


Though it has 16 Tanks and 27 infantry (on 7 bases), this list has just 7 actors. The five fighting platoons, plus 2 "Warriors" (the 1iC and 2iC) that can join units at various points during the game. There's also two spotters for the artillery. Though these don't do much more than dig in when the game begins.

Now let's look at an infantry-heavy list that I faced on Saturday: 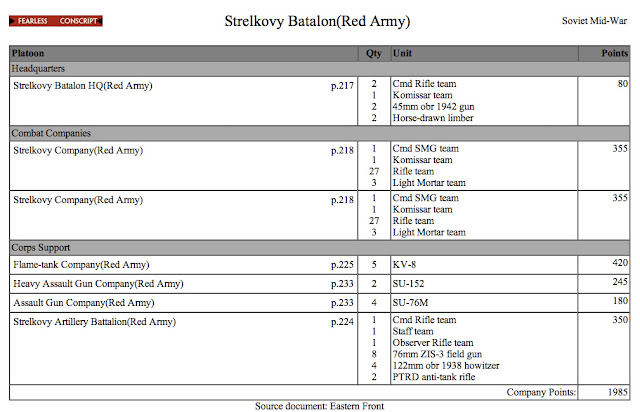 This list has nearly 380 infantry (on 86 bases), plus 11 tanks. Yet it's still only 8 actors (plus spotters). Those large infantry 'companies' move as one large unit of 32 models. Which isn't that different from an Imperial Guard platoon in 40K.

From what I've read, 6-8 combat/support platoons seems to be the norm for Flames. Since many of the missions require you to put half of your forces in reserve, it helps to be able to put down 3 or 4 units on the table instead of 2. Half of those can normally be placed in ambush. So a large list might take 8 units total in order to be able to ambush with 2 of them when called for.

But... It's difficult in most lists to go over 8 combat/support platoons (10 actors with the command units) without losing effectiveness. I could max out my number of tank platoons, for instance. But since close combat happens one unit at a time, I'd be screwed going MSU against that Soviet list above. I need a large unit or two of tanks to kill infantry in assault. And not taking the expensive tanks with the big guns would hurt me when I have to kill some Tigers or KV's.

Now, obviously different players have different thresholds when it comes to juggling actors in a game. Some are going to like the challenge of having a lot; or see their own high actor-tolerance as an advantage that they can exploit when playing against others. But what's optimal for the majority of players? At what level is the game going to be fun for most vs. draining? And is there a limit to the number of actors that can be usefully included in a 40K army as GW continues to push for larger and larger games?

I think we can see a clue in the preference many non-competitive 40K players have for games at 1500 (or less). They'll say that 1500 is what 40K is 'balanced' for. But they don't mean 'balanced' in the same way that most hard-core competitive players talk about balance. I think what they really mean is that at 1500, they're pushing the right amount of 'stuff' (meaning actors, not models) around the table. They're talking about their ability to comprehend the action, not their ability to win or employ fun tactics.

At 1500, my old IG would be running about 10-15 actors. While most Marine lists would average about 8-12. Notice how most new players tend to go low and have to be taught to take quantity over quality?

And the Flames of War community seems to have settled on 1750 for mid-war and around 1500 for late-war. Given the cost reductions of most units in late-war, that means that the armies are going to be roughly the same size between the time periods. Which for my Germans is about... 7-9 Actors.

Which, oddly enough, is also about the maximum number of recurring characters in an ensemble TV show.  Star Trek was 7. Firefly was 9. Maybe that's the magic range where most folks can keep things straight in their heads?

What might the upper limit be? Chess and checkers have 16 actors per side. Although both games limit what each one can do very rigidly.

So How Can We Reduce The Actor Inflation? 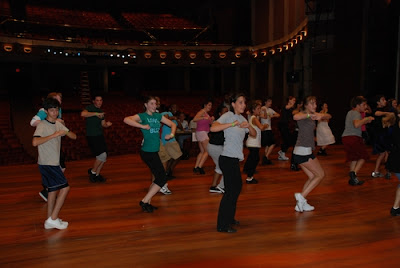 Let's assume that we're GW, and we want to keep selling more models for larger average games. How can we keep from overloading our playerbase with too many actors per game? Consolidate.

Much of this could happen on the army list side of the game. Want to play Imperial Guard? You're going to be buying your men in platoons of 20-50 men plus a Commander and Commissar.
If they have transports, these also act as a platoon. So you have a big blob of guys and a unit of transports. Making it just 2 Actors instead of 6-10 for the FOC slot.

Orks would be bought in Mobs of 30-60 boyz much as you can do now. Trukk Boyz would be 30 infantry models and 3 or so trukks.

Marines, being elite and all, could be bought as separate small squads.  All vehicles would also come in squads/platoons.