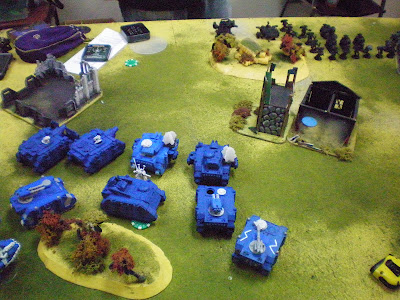 Last Weekend (the 4th) was a tournament held by Indy 40k that was structured as the Indy open, to get a feel for it, and even used missions from the mission packets. There was a pretty good turnout of around 20ish people, and some of the toughest in the local crowd. Here is my take on how it went down. 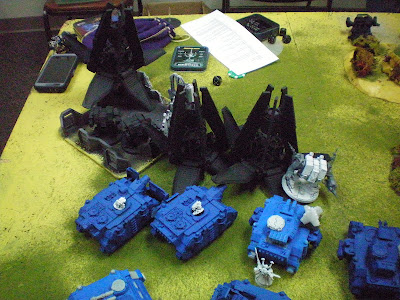 I seized initiative against him, and opened fire on his typhoons and devastators. My stupidity set in early that day, as I didn't even bother popping smoke with my side vehicles. sigh. 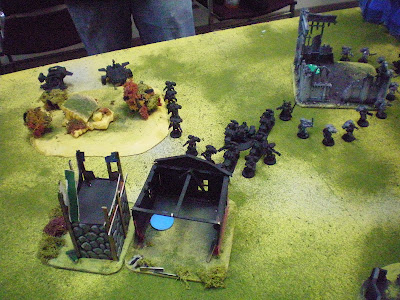 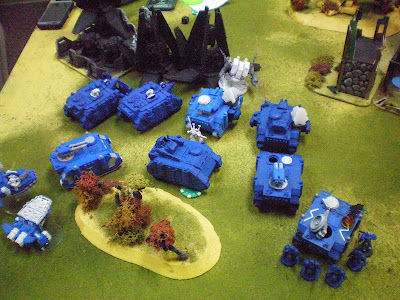 The two heavy dreads fired on my vindicators, their multi meltas missed, but both of their heavy flamers glanced. One demolisher cannon was gone, the other vindicator was shaken, while the attack bike blew up a razor back, one of my baals was wrecked by the Furiouso dreadnought. 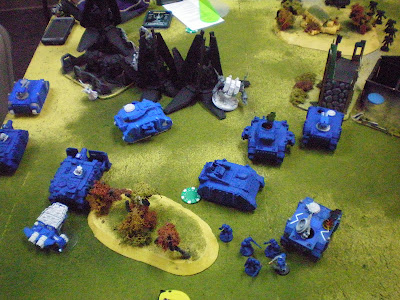 I repositioned to set up fire on each dreadnought, and either failed to hit or to pen. Then entirety of my army shooting resulted in a Multi melta arm being destroyed. I figured I'd at least get one dread with Mephiston assaulting. Nah, he rolled a 1 to fleet, and snakes eyes to assault through cover. 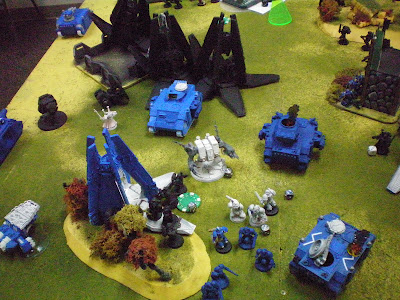 It is worth noting, the Dread my mephiston was supposed to assault, I decided to randomly shoot with my plasma pistol, ya, that shot blows it up, leaving him in the open. The rest of the troops come in, blowing up razorbacks, and causing havoc. His mephiston gets closer. I ram a dread with my weaponless vindicator, and he death or glories and blows up my tank. (Note, the blue droppods are his, he had borrowed from me for the day, thus they look like mine, and I had to keep reminding myself they were his) 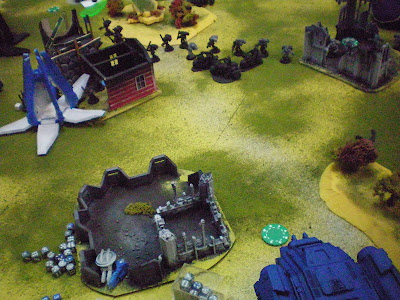 Calvary has arrived. The storm raven does it's usual thing and doesn't come in from reserves till almost turn 5. Opens fire on mephiston, assault cannon and multi melta are 1/2 an inch out, and I missed with half of my blood strikes. Sigh.... 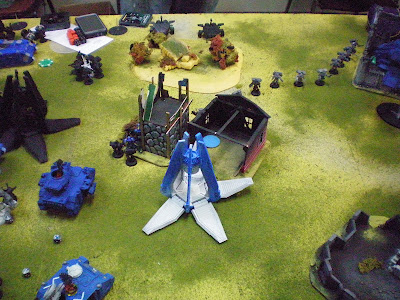 Storm raven turbo boosts into position to move to objectives. 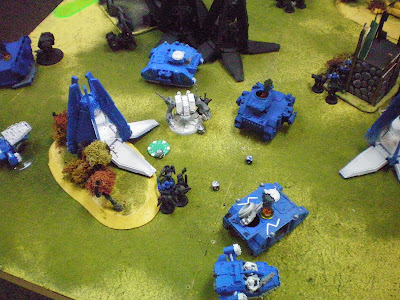 Sigh everything has gone down hill from here. 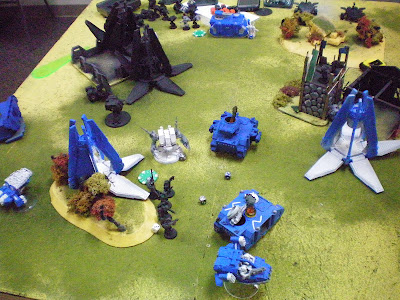 I brought my mephiston around to take out his assault squad in the back, while my last razorback squad moved over to grab an objective. My center squad died in combat allowing his five guys to hold the middle. The Storm raven dropped off my Dreadnought, who assaulted and killed off the other assault squad in his back field. The game came down to the center objective. My continuous mistakes with the storm raven cost me the game. I could have brought it anywhere and had been in range to kill mephiston. I also should have been closer to the middle to move out and contest. 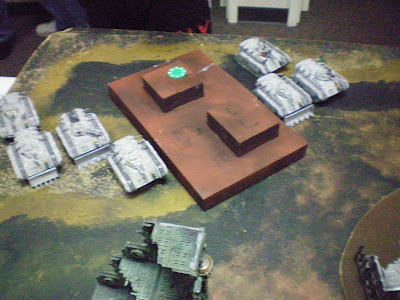 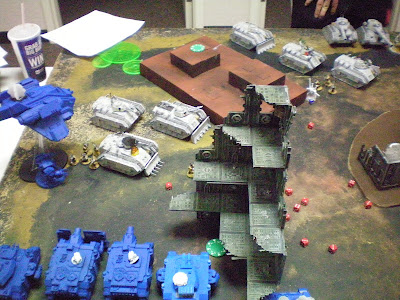 Dawn of war deployment had me start mephiston in the middle and he got a lot of chimeras out early. He managed to seize the initiative on me and generally repositioned his tanks and popped some smoke. He got a little too close to my side, and so when I drove on, I used search lights and destroyed 3 of the 4 nearest me. Mephiston jumped out and blew up a chimera. 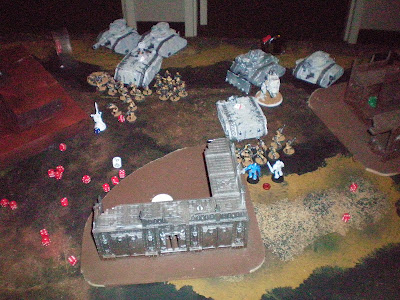 Mephiston did his job and drew almost the entirety of the IG fire power only taking a wound or two. A russ did manage to blow up one of my razor backs, and kill a few of them. The surviving two with a flamer decided to move up and kill a IG squad, or so they thought. Used my flamer to hit 7 guys, I only wounded 1 of them (on a 3+), but I wiped them out in combat so it was ok. 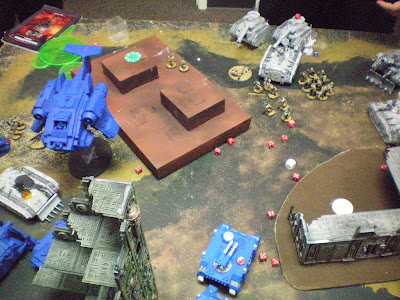 I started driving over dead tanks and tank shocking the few survivors getting into position to take on the russes. Mephiston did as I planned and made it to the back to assault on of the Russ Squadrons. Of course he failed to get his S10 power and so I only got a few glances against them. 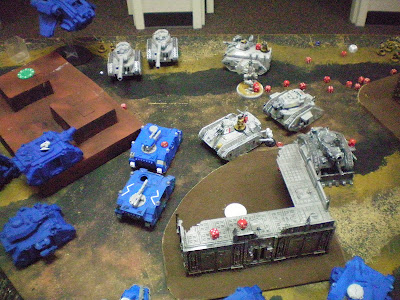 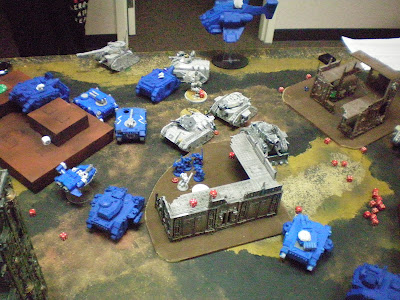 I started slamming, ramming, and shooting into the russes and still couldn't get any results to stick. But luckly the damage was done. In a Table quarter game, he still had a huge amount of points left, but I had trapped them in his corner. Even if it had gone to secondary I had only lost 3kp. 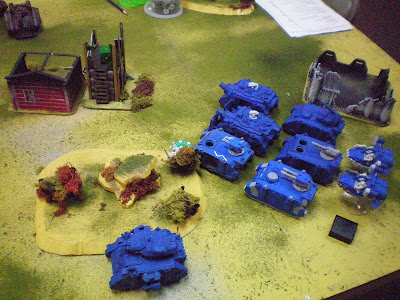 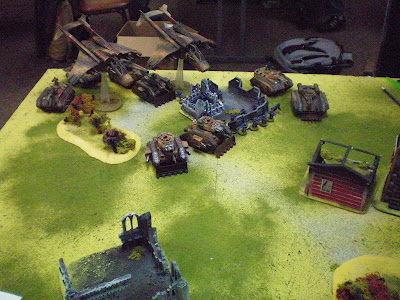 Game three was against another IG player. I hadn't played against IG in almost a year, this was a nice refresher. He had first turn and I reserved my storm raven (stupid at work again) and out flanked a Baal predator (ugh!). Naturally he has master of the fleet, which I even knew about and still did it. 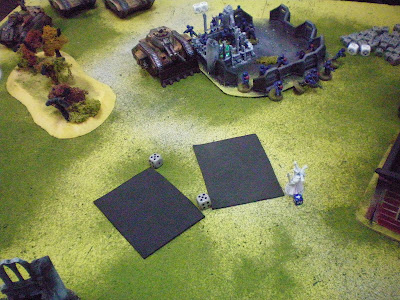 Most of his shooting managed to score low on the damage table and almost all of my tanks survived in some way. Mephiston took a wound and jumped up to hit the Russ squadron. Again he managed to blow them up leaving him in the open. 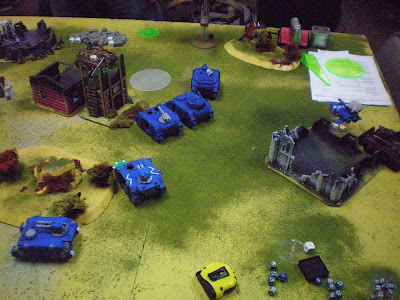 My weaponless Vindicator rammed his Hellhound in the middle, and blew it up...but also got blown up. Dejavu? Razorbacks and chimeras traded blows as did the melta squads in each. 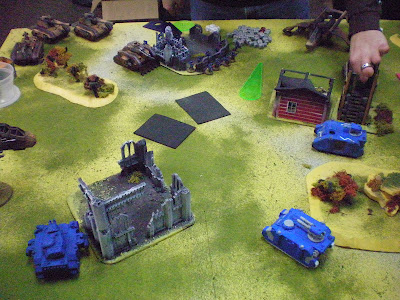 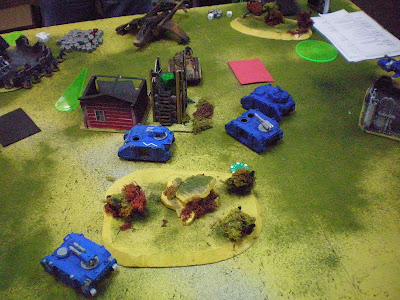 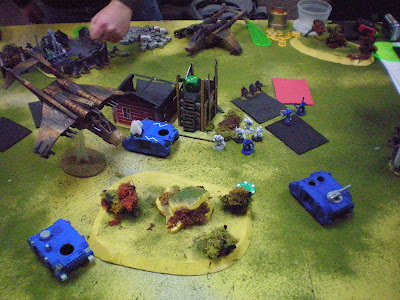 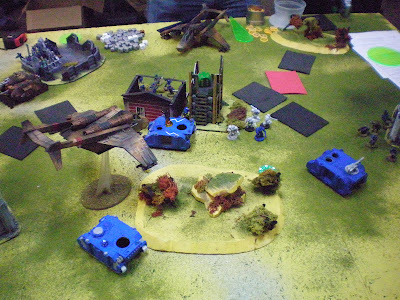 Tanks blowing up left and right, I lost most of my majority and I started pulling infantry back to my objective.

My other Baal pred came in and combined forces with the fist one, trying to press the advance to his objectives and maybe hit his basilisks. Assault cannons gave me nothing good this game, and Rapid fire plasma guns took down the tanks. 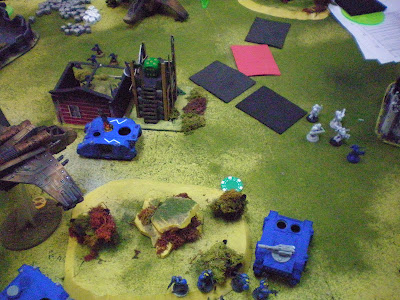 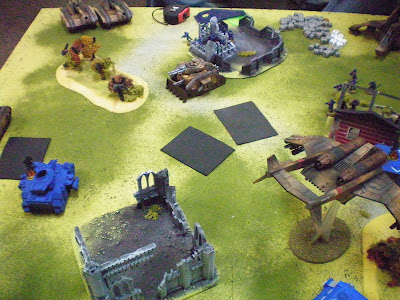 You can almost see some guardsmen running away from the center building. I have three marines there with a flamer, and he had two squads. I figured I would shoot one, and multi assault to finish them. Naturally the squad runs away and I roll poor to assault through cover after them. They rally next turn and move back up to shoot. 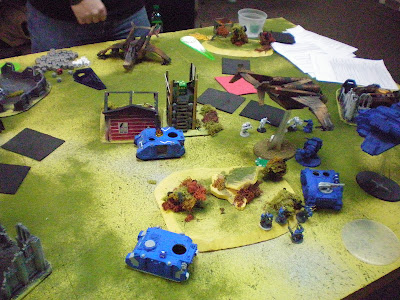 The storm raven Finally came in, and even all of my melta shots combined could not take down his Valk. Luckily the game went on, and Next round I took it down and claimed my objective. The squad in the middle survived to assault and killed both squads.  The lone surviving marine managed to make all of the saves from the entirety of the guard's shooting for two full turns and won me the game.

Over all a great day, some poor rolling, and some poor tactics at times, but I learned from them. I need to stop reserving my Storm raven so much, and I need to learn when to be aggressive, and when not to be. I ended up Tied for 3 place I think, and ended up 5th after tie breakers. My Nemesis ended up winning First place. Looks like I trained him well.

posted by TheGraveMind at 1:36 PM