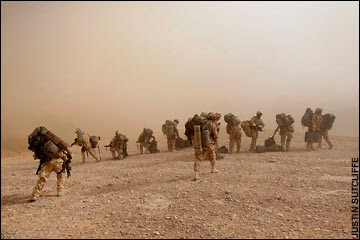 Here's a nice little method for texturing a model's base to simulate rocky desert terrain. I'm using it on my Afrikakorps Germans, but it would work just as well for 40K models. In fact, it's much the same method that I used to make the rocky 'snow' on the base of my Emo-Wing test model. 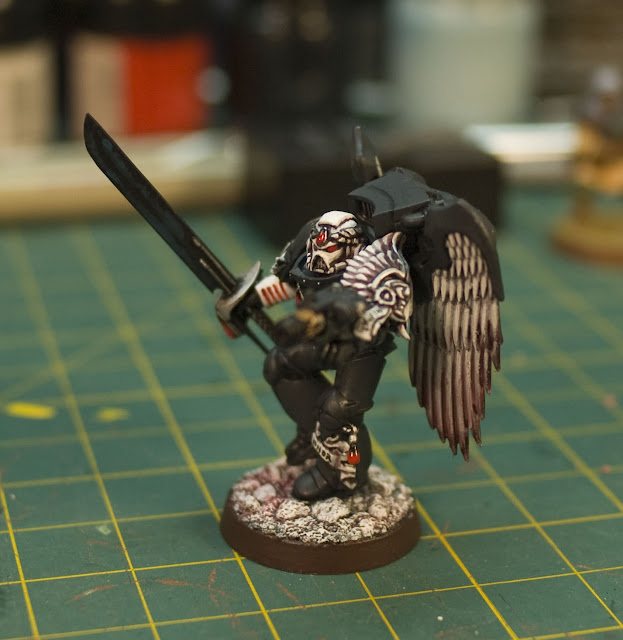 Here's a pic of him. 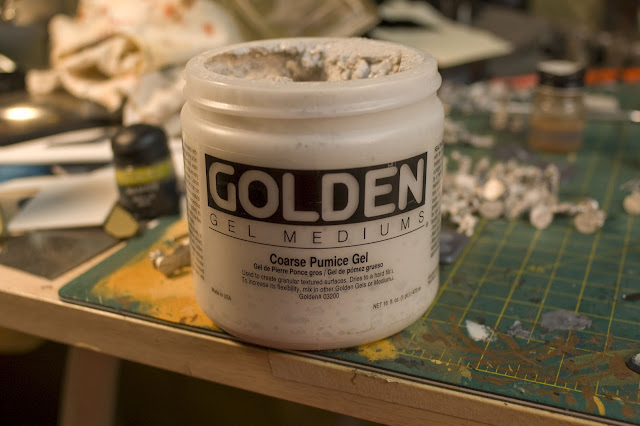 The Pumice Gel is an art medium that was developed for texturing canvases before painting. So go to your local art/craft store (Michaels here locally) to find it. It should be next to the pre-stretched canvases. You can find the palette knife in the same place. You can use another tool to spread the pumice if you prefer, but it's hard to beat the ease of using a palette knife for this.

The Ballast should be available anywhere they sell model trains. Which is Hobbytown USA here locally. 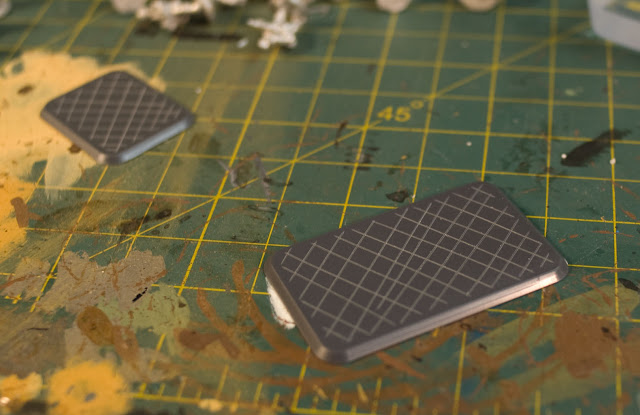 GW-style bases have more than a texture on them than Battlefront's. So you might not need to do this. But I've cut a shallow criss-cross pattern across them to help the gel adhere firmly to the smooth surface of the plastic. 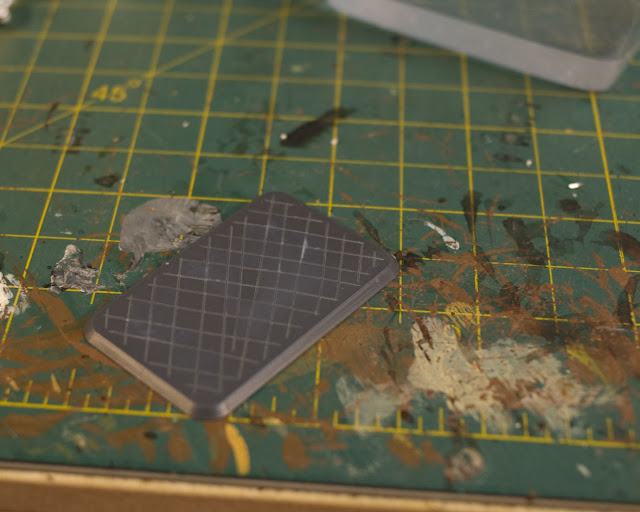 You can use a brush or your palette knife to put some water on the base. This will help the pumice gel spread more easily and evenly.


Step 3: Spread The Pumice Gel On The Base 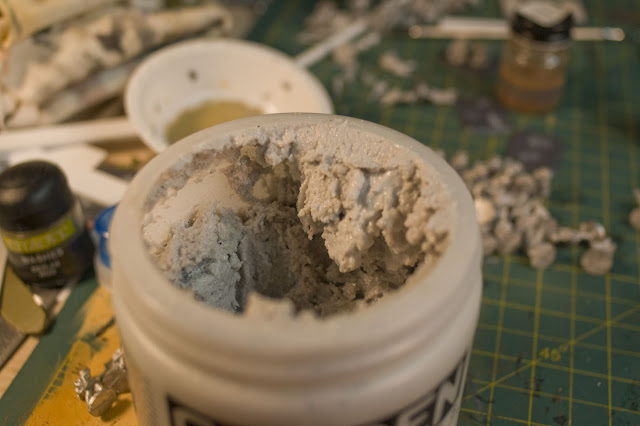 Here's what the pumice gel looks like in the tub. 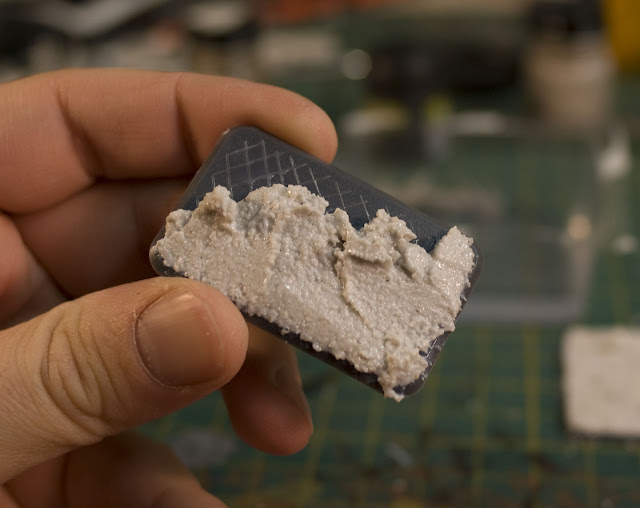 It will go on chunky, so you have to smooth and shape it as you go. 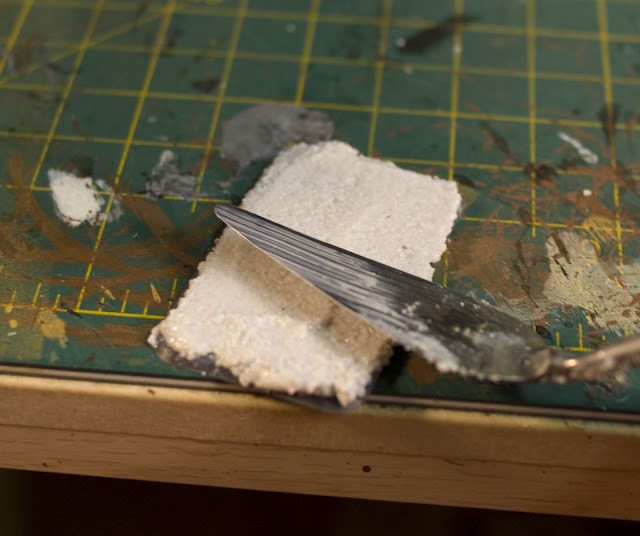 You want a nice, even coat with no obvious knife strokes. A little height variation across the base is fine. It'll make the terrain look more interesting.

If the gel sticks to your palette knife, put some water on the knife before spreading it.


Step 4: Clean Up The Edges 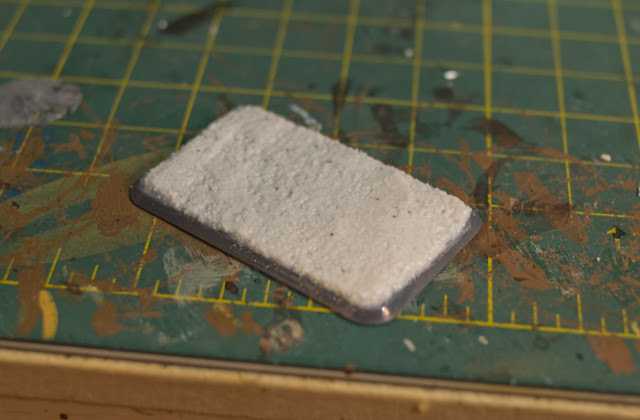 On your first pass, use the palette knife to remove the excess pumice gel from the base's edges. Do this with a diagonal motion that moves across the edge and DOWN. So that you don't pull the pumice upward and off of the base.

On the beauty pass, wet your finger with some water and run it across the edge to clean off any gel smears. DO NOT lick your finger! This stuff tastes awful and will make you sick. :P 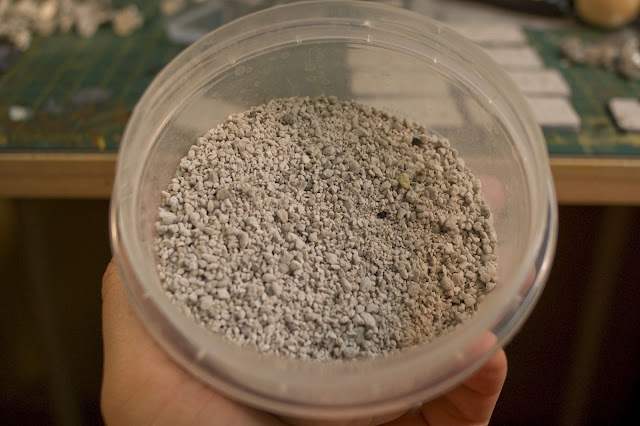 Now we get to add the Model Railroad Ballast. Here's what it looks like. You could use sand instead, but I like the variety of rock shapes I get with this stuff. 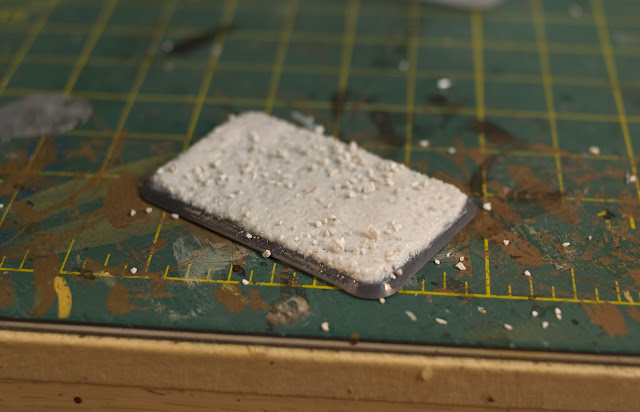 On your first pass, you want to grab a pinch of smaller stones and sprinkle them lightly over the base. 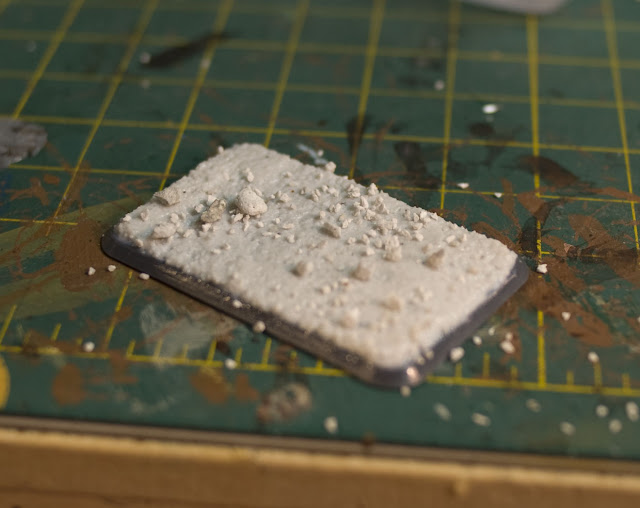 Then you can go back and drop in a few larger ones. I use tweezers to arrange these more deliberately, so that I don't get all the big rocks on just one side of the base. 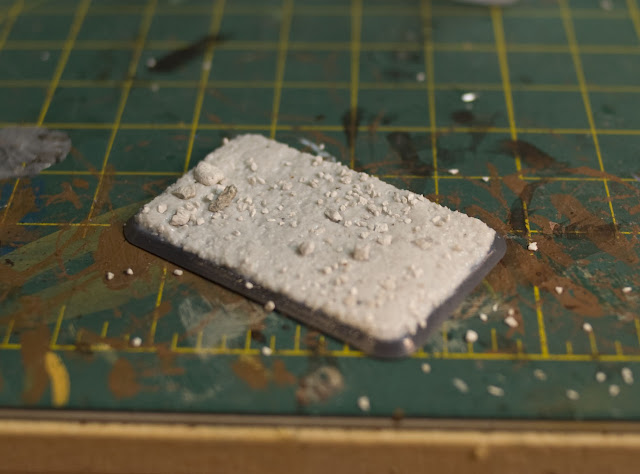 Once you've got the larger rocks placed, dampen your finger and press down lightly on all of the rocks (large and small) so that they're firmly planted in the gel. 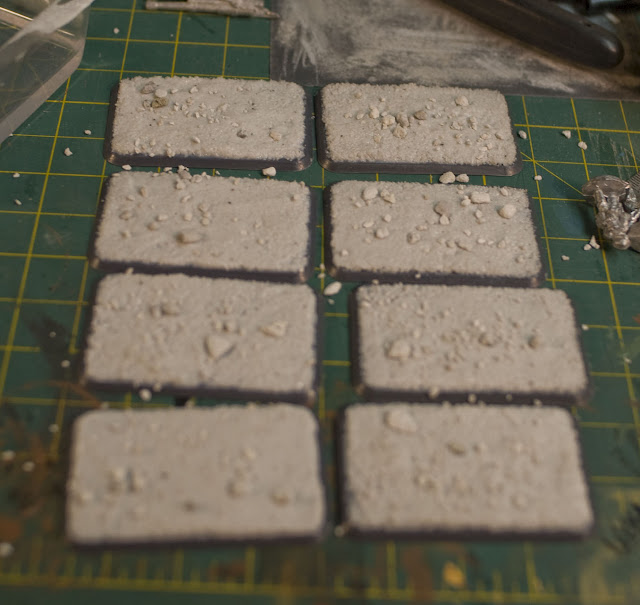 It's a lot faster if you sprinkle many bases at once. 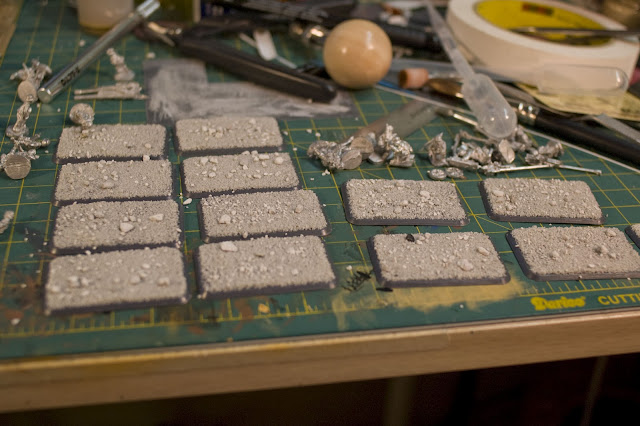 This will take 3-4 hours. I usually do this right before bed and let them dry overnight. 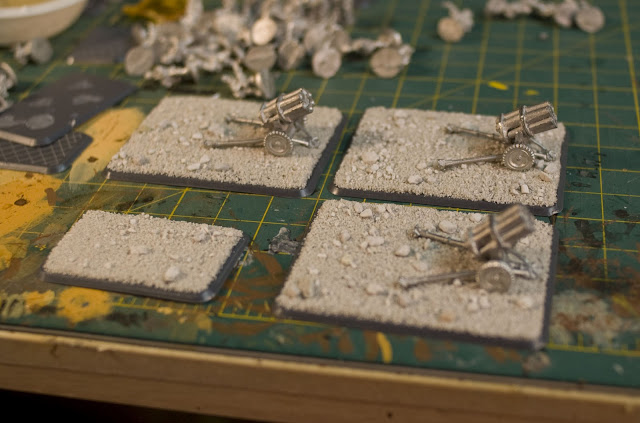 Now, I could have just glued my models down first and smeared the pumice gel all around their feet, but I didn't want all of my infantry standing on strange little mounds caused by the thick metal bases they're standing on. So we'll need to add them afterward.

Thing is, the pumice gel will remain spongy, even after it dries. So you can't glue models down on top of it because they'll come loose or just tip over. Instead, you have to make little holes in the pumice and glue your models directly to the plastic base. I use epoxy for this, as it creates the strongest bond. If you use Super Glue, your models will snap off more easily because of the limited surface contact with the plastic base. 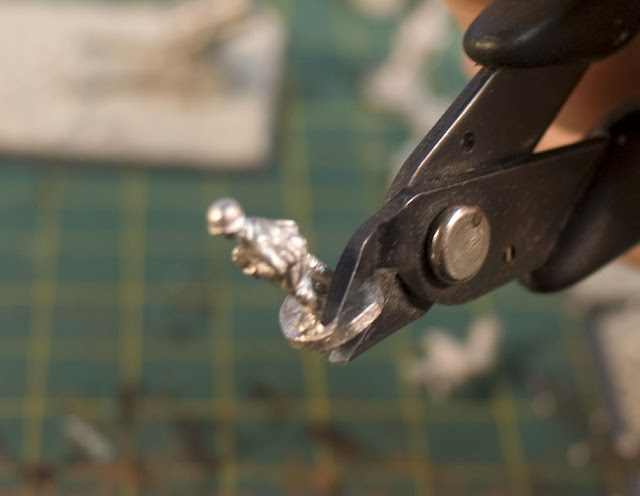 So the first thing to do is to clip off that metal circle from under each infantryman. I do most of the work with a sprue clipper and clean up the result with an X-Acto knife. When you're done, you want your infantryman to look like he's wearing elevator shoes. The part under his feet needs to be the same thickness as the layer of gel on the base. So once you clip off the excess metal around the feet, you'll need to trim off about half of the height of extra metal under the feet. 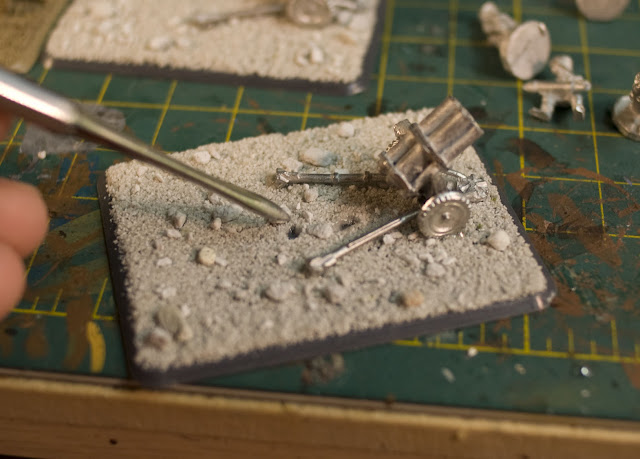 Next, put the infantryman down on the base in the position you want him and mark where his feet go. Usually, I can just press down on him and his feet will leave 2 small impressions in the spongy pumice. I then take my sculpting tool and dig/push the pumice around until I've exposed just enough plastic base to glue the infantryman to. 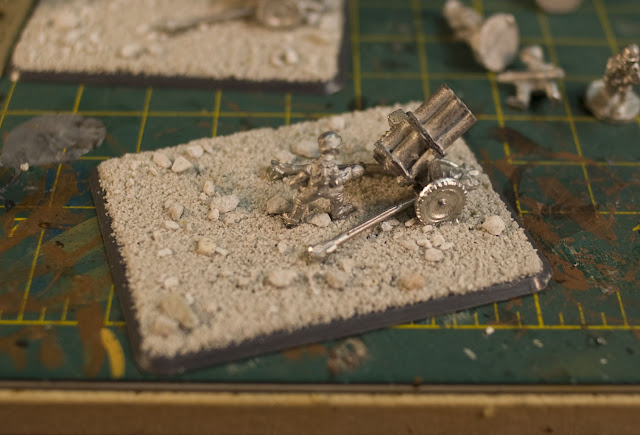 I then dip his feet in some epoxy and glue him down. If you clip/trim all of the infantrymen for one base together, you'll only have to mix the epoxy once. I find that I can get about 5 men glued down before the epoxy cures too much to be worked. 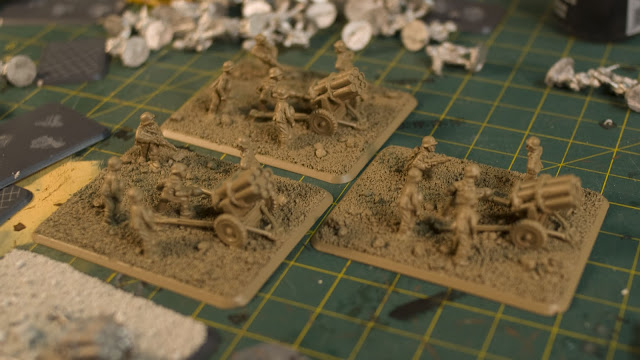 Here's some finished Rocket Artillery that I primed and painted with Tamaya Air Force Tan as a base color. The paint will harden up the pumice and make it rigid. 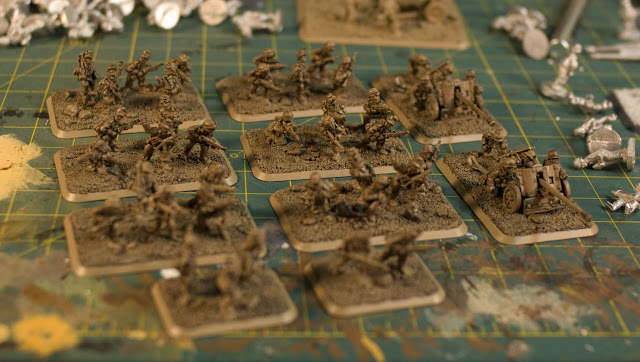 And here is a Shützen (Rifle/Machine Gun) Platoon that's been washed with Devlan Mud. This isn't the final paint job, but they do look pretty good!
posted by SandWyrm at 12:06 PM