Sisters of Battle suprise me!!!!! 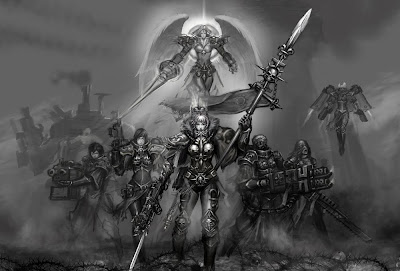 I played a game with a player in Evansville named Dave.  We wanted to get a game in at 2,000 points. And I can tell you that they surprised me.....


The mission we rolled up was Annihilation with spearhead deployment.  I only had 16 kill points to his 21 so I knew I had the advantage already.  He did win the roll to go first and put me in a corner that had very little cover.  His list was approximately: I am sure I am missing something but this was the basic idea.  I have never worried about Sister's of Battle because they didn't have any close combat to worry about and my type of play doesn't really care that much about the firepower as long as I have cover.

Well him putting me in a bad quarter caused me to play slightly different than I normally do.  I reserved 4 units of my army to make him think and cause massive damage when they came in.

What I am impressed with was the ability for the immolaters to scout and therefore get multi-melta shots at my TWC.  I deployed them out of sight of 2 exorcist but moved them in error which allowed him to see me with all 3.  I took 1 wound on every model in his 1st turn shooting,    The game was really going my way until Celestine got back up and was able to kill 3 TWC in an amazing show of 4+ rolls.  I was also impressed that Celestine got up every turn with 2 or 3 wounds on and was harassing my back line.  He also had his henchman unit with Uriah who with the ability to give them +1 attack, feel no pain, and re-roll misses on the charge is a nasty unit for about the cost of my Thunderwolf Lord.  St Celestine got up 5 times!!!!

I ended up winning by a comfortable margin of 5 killpoints, but this type of build would be exactly what I would play with  few tweaks like a 4th scoring unit instead of a celestian squad or so.  The added addition of Celestine's low point cost, the counter assault or assault unit of henchman, the exorcist's firepower, and rhino hulls with muti-melta, flamers, more melta, and acts of faith and you have a pretty decent army.

Farmpunk, I think you should break them out again!!

What type of sister's armies are you seeing? Does anything impress or not impress you with the updated version?
posted by Spaguatyrine at 7:57 PM