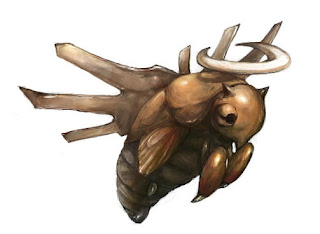 It seems these rumors were correct and there are now leaks to WD pictures of the new Tyranids (and space wolves but what ever :)

They all look cool, but I don't think they are OMG amazing. It looks like the Tyrant will have extra boneswords to make a swarmlord with. There is a picture of a Flying Hive tyrant, but I didn't see him listed on the prices. While it is nice to finally have the model, I don't think it is worth paying for a separate box for one when I could just add wings to my other one.
The tervigon and tyrannofex look like the codex pictures, so nothing wrong there, back legs seem a little wanky.
There are finally thunder wolves, and they look a bit small. I'm wondering how those tiny animals carry the weight of a space marine. I'm not sure how happy people are going to be buying 3 for 55$

Over all I think it is a bust. Still no Spore pods, no harpy. Unless there is a rules update to go with these I'm not really interested. I'm sure purest and non-converters will be happy to have models, but these release wave is just not going to be as hot as it could have been a year ago.

Looks like I might be selling my Tyranids soon. Not because I want to buy the new models, but because this shows they will not get a fix any time soon. I'm thinking 15$ for each MCs or a squad. I'll try locally and then ebay or craigslist.

PS. Looks like they will be selling a pair of boneswords or a bonesword lash whip set for 20$ each in finecast. Ya, that is such a good deal...
posted by TheGraveMind at 11:41 AM