Are power weapons really that confusing?

Now that the nerdrage from fortifications and allies has died down, we have a new contender for the ZOMG!!1one award - Power Weapons.
What is it?  What does it do?  Is mine fancy?  Is mine longer than that guys'?

Well, kids, it's time to find out.  Except maybe that last one.

I'm going to attempt to break this down as simply as possible.  I'd draw a pretty chart, but I only have a keyboard - though if anyone wants to buy me one of those fancy computer drawing pads, get my E-mail from Farmpunk and I'll be happy to oblige.

First, open your codex to the wargear entry appropriate to the weapon in question.  Reference pages 60-61 of the BBoR (or the Space Wolves FAQ if applicable).

Is the name of your weapon, or the name of the weapon that your weapon emulates VER BATIM held within those pages?
Yes - Congratulations!  Use the profile listed.
No - Continue reading.

Is the weapon simply listed as a power "weapon" with no further unique special rules?
Yes - So close!  The following paragraph will cure you of your brain-herpes.
No - Almost there!  Skip to the last paragraph to have all of your life's problems solved.

Power Weapons are broken into four, and only four types.  Sword, Axe, Maul, and Lance.  How do you tell which type your weapon falls under?  Look at it!

Sword - Daggers, knives, swords; single or double edged, typically straight but sometimes slightly curved, these weapons were most often carried by medieval knights, and apparently warriors in the far flung future.  I guess to look forward, sometimes you have to look back.

Axe - Axes, hatchets, most polearm/halberd weapons; If it looks like you can chop wood with it (effectively, that is) then you're probably looking at an axe.  You'll note an attached head with sharpened (and generally curved) blade, rather than a full, straight(ish) blade running from the pommel.  This is the biggest indicator that you're a lumberjack of the 41st millennium!  A deadly, deadly lumberjack. 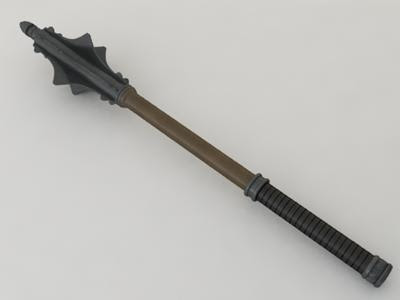 Maul - Clubs, flanges, morning stars, staves; if the edge is blunt rather than sharp, you're a maul-toting maniac!  Congradulations, your 2nd-ed DnD cleric-like aversion to bloodshed (accidentally bashing brains through skulls doesn't count) has gifted you with the Concussive trait! 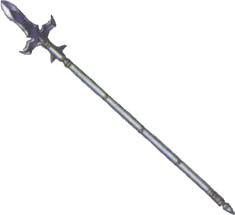 Lance - Spears, lances, javelins; if your weapon is a long shaft tipped with a dagger-like blade that would be a good fit in a punji-trap, then you're wielding a lance!  African war chants are not included, sorry.

Now, what if your weapon has unique special rules?  Per "Unusual Power Weapons" on page 61, if a weapon has its own unique close combat rules then it is simply treated as an AP 3 weapon that follows all of those rules.  If you're unfamiliar with the word unique, it means that the rules your weapon has are not rules common to other special characters or codices.  It means rules found only for that specific weapon.  So let's check again, does your weapon of choice have its own unique rules?

Yes - Good!  Your weapon is fancy!  It follows those rules, and it's AP 3.  Good job!
No - Oh, you realized that its rules are found throughout the game, therefor making them non-unique?  Reference the above chart to see what sort of weapon you have!


Now grab your Power [insert type here] and go slay the [enemies/heroes, select one] of the imperium!
posted by Anonymous Foodie at 5:59 PM