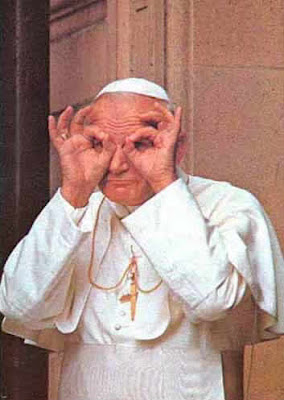 I still don't agree with the new Battlefront-only model policy for their official FoW tournaments. After all, their openness in allowing other models to be used was a big reason I took the plunge into playing the game in the first place, and I don't think that it will accomplish anything but pissing off their adoring fans. But well... Battlefront still is not GW, and John Paul has proved it by commenting directly in their forums about the issue. It's thoughtful and worth a read.

If I was a child and wanted to hold my breath I would not be letting people run around on our forum spouting such utter nonsense but deleting their posts and banning their accounts but that would be childish and serve no real purpose as I prefer to read what is said and then comment when I feel the need.

If Flames Of War is not creating our own IP I dont know what is and I know that Pete, Phil, Wayne, Evan and the guys would disagree as they have spent the last ten years of their lives dedicated to creating a hobby that is the heart of our business and completely unique. FOW is what drives the WWII 15mm gaming community and has done for many years and despite other manufacturers of models it was never any more than just another historical scale before FOW came along. If supporting your hobby involves you changing sides every time a business decision upsets you I would ask anybody who enjoyed their free copy of 3rd edition to speak up and say that we behaved like GW. Stand up and tell me that we are like any other company and I will give you five exmaples where we have proven time and again we are not. We are simply making a choice for our own events and even if you disagree you should respect us for the right to do so as just like giving away the rules free to over 50,000 people this year the same people made that choice so we cant be as bad as some of you would make out.

The problem is that the vocal few with more opinion than understanding would make it sound like this effects the entire hobby. You are wrong. Competitive gaming is a part of our hobby and we support it becasue we want to help that part grow but 90+% of all gamers are casual players who play in stores and at friends houses and never particpate in a tournament. These are the core of our business and despite some posters in this thread claiming to "know" this is a small issue effecting a gorup of players who however vocal are not the only gamers in the hobby.

Despite it being unwise to comment on this thread it is hard to read personal attacks on yourself and your team without feeling a little hurt and whilst I should not defend our choice more as it will just give some of you more fuel to bleat I stand by what I say. Try and look at the big picture, remember who we are, what we have done and how FOW got here and then just decide if that is your hobby or not as you shoud want to support your hobby and if this or any other decison we make has you changing your mind then we wish you all the best and thank you for your business but we will still be here doing our best and behaving the way we always have.


Here's what I wish to say in response:

John Paul, PLEASE stop calling it the FoW-Hobby. Because it's not. The hobby is 'wargaming', and you are but one company, selling one game, within it. DO NOT slip into the same frame of mind as GW and start thinking that your company IS the hobby. Because you are not. I think it's this slip into GW-speak in your announcement last night, more than anything else, which is shaping players' attitudes towards this change. That you slip into similar language today in this post is even more disturbing.

As for the decision itself, I'm sure that it was carefully considered using criteria that I'm not privy to. That's fine. It's your call, and I'm not going to rage-quit over it. I would have preferred that you simply raise your tournament fees to cover whatever shortfall you're experiencing (if that's really the issue). But I'm not running your business, and you're not a public company. So it is what it is. I do appreciate the free rulebook and the other awesome things that your company does on a regular basis. Make no mistake about that.

But this policy represents a disturbing change in Battlefront's attitude towards it's customers, and I honestly don't think that I would have started playing your company's game if this policy had been in effect 8 months ago when I began playing Flames Of War and buying your models. Three other players started the game with me and I don't think that they would have started the game under that policy either. Your openness to us using other models in your events was what finally got us to buy in.

As it is, I'll have to refrain from attending your national tournaments, as I do not intend to limit my purchases to only BF-minis. As I've said elsewhere, I do not think that most BF minis represent either an advantage in quality or value over those of The Plastic Soldier Company and other BF competitors who sell competing options. If you can improve your products' value, durability, and quality, then I will gladly choose them on their merits, even at a slight markup. But until then I will only buy models from BF that your competitors do not sell better models for. My 5000-point collection is only about 75% BF, but that's 75% that you wouldn't have at all if I'd never started playing. Think about that please.
posted by SandWyrm at 12:58 AM