Going out with a bang.

By TheGraveMind
So 6th edition has been around for a bit now, and I've been mostly quiet. I've read through the rules many times, but haven't really bothered to play a game yet. I've been working on the hobby aspect of the game mostly. I'm not here to talk about 6th ed, at least not today. Today I'm talking about the tournament Wienas just ran. (link to past post) It was a 5th edition tournament and I decided to go out with a bang and play my tyranids. Wienas' Recap and breakdown

I knew I was going to have a hard time against some of the tougher lists/players by bringing my Nids, but I went to have fun. I was playing to win, but not playing competitively. There was a much larger turnout than I expected, as I figured most people wouldn't want to bother playing 5th ed. I saw a lot of new faces, which is always a good thing. I was even surprised as there were 2 other Tyranid players, making 3 out of about 20 players. That's the highest ratio I've seen in a while!

I'm not going to bother you with full battle reports, (also I forgot to take pictures as the day went on) but here's a recap.


I had a draw against a fine gal from bloomington that plays necrons, then I got my face bashed in by Kharn the betrayer and tons of berzerkers. I pulled out a victory against Dante and his sanguine guard, and finally I tackled mephiston and co for a last game win. Going 2-1-1 for the day, and felt pretty good about it. I didn't win my first two games which I felt I had a good chance at due to my own mistakes (over assaulted against necrons, bad deployment against chaos and then got seized). I ended up winning my last two games, which I came back from getting beat by baiting and making decisive assaults.

I don't really know my ranking for the day, and that is fine with me. I got a small prize for sportsmanship, which always makes me feel good, that people like playing against me. Spag pulled 1st over all, with Nemesis coming in second. The Imperial guard army was raffled away and went to one of the newer guys (sorry I don't remember the name). 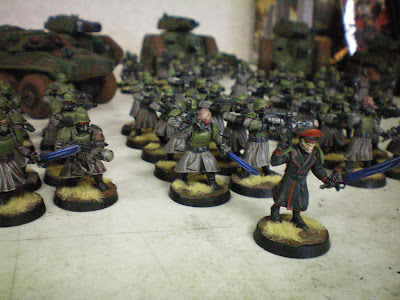 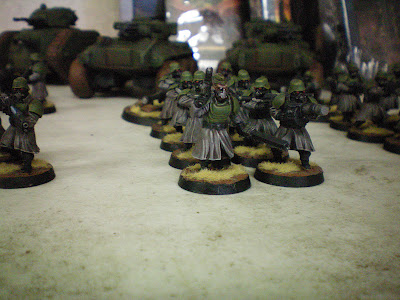 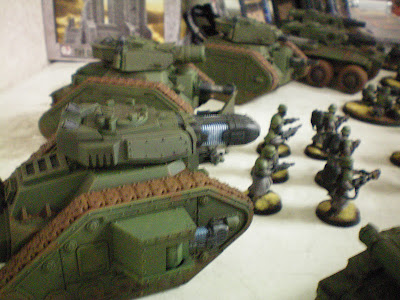 It was a great crowd, and I enjoyed the diversity of armies and people we brought in. I know it at least stretched from Bloomington to Lafayette. There were bitz as a door prize for everyone, and tons of items raffled away. Sadly, I didn't get pictures of other peoples armies, hopefully some else snapped a few and we can get them up.

I had truly forgotten how much fun it was to play my Tyranids. Not to sound full of myself, but I felt like I pulled out my victories by my skill and 6 years of experience playing tyranids. Playing Table quarters in 3 of my 4 games, with an army that has amazing board control was great. I was also able to pull the final hit with my tyrant almost each game. The only game where my my Hive Tyrant died was against Chaos where I took a Kharn to the face. (btw, Ws 8 means nothing against always hitting on 2+, UGH!). I think that was the only game my Tervigon died in as well.

And now that 5th ed is finally fully behind us, I guess it is time for me to start playing 6th. For now my tyranids are being placed on the shelf, as I finish painting them up. For 6th, I think it may be time to try something new. Stay posted!
posted by TheGraveMind at 9:44 PM