This Is Different... And Pretty Damn Cool! 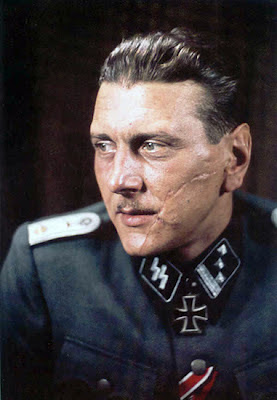 More details are coming out about Devil's Charge, the 2nd book in Battlefront's Battle of the Bulge series. I'm going to focus on a couple of the cool German toys that really mix up the way the game is played. These mechanics would be perfect for Orks or Nid cultists. :)

When the Germans attacked the US lines during the early days of the battle, they sent in Otto Skorzany (above) and his elite commandoes to sow confusion behind enemy lines. They wore US uniforms, drove US vehicles, and took over checkpoints, where they would give false directions and information to US troops that were trying to get to the battle.

In-game, we're being told (by Battlefront itself) that you can deploy your Skorzany commandoes in your opponent's deployment zone. Where they'll be able to pin your opponent's troops (by spreading rumors), keep enemy reserves from moving onto the table within 12", and will act as recon troops (no ambushes within 8"). This would really mess with US Tank Destroyer companies. :)

The Germans also disguised some of their units. They made their Panthers look more like M10 Tank Destroyers, and they disguised their Stugs (poorly) to look like Priests.

In-game, this will mean that (as long as you don't fire yourself) you can move up towards enemy lines and your opponent will have to identify you before they can fire. An idea which, if I was GW, I would totally steal for Orks. :)

It's so nice when a company tells us about the cool stuff they want to sell. :)
posted by SandWyrm at 10:23 AM