Apparently, It's Old Stuff Day... getting shot up and pulling models 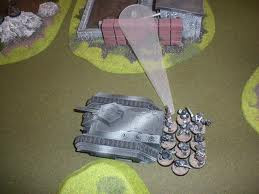 I turned on the way-back machine, and found this one:

Getting shot up and pulling models by Farmpunk

So last night we played a team game. SandWyrm (IG) and I (DH) vs. Ross (ork hordes), and a player coming back from 4years of not playing. I think 3rd ed was when he played last. We had to go over a lot of rules. And Argue over wether the Deciever can be included in a lit of 1000pts, and if the Callidus assassin's Word in your ear can affect the C'tan.

But I digress. I thought of a more interesting topic. Or at least one I think Might Help Ross with his Orks. I feel bad seeing them loose fairly often. I think going over the arts of model pulling might help.

For instance, in our team game last night, SandWyrm and I shot up the front 30 boys to 2, leaving the 10 nobs and warboss nougat exposed in the ork sandwich. 30boys, Nobs w/warboss, 30 boys

The Nobs and warboss were the unit I was worried about. The nobs were sort of in a mass in the center, with the warboss in the middle of the nobs. They were tightly packed. Shelia the callidus came in from reserves to do her flamer nastiness.

It's a bit of a difficult call when you've got to choose between being shot up by Heavy Bolters because your unit's not 50% behind cover, and grouping up to get cover from Hbolters, and getting flamed in return.

So Shelia set up for the kills. she flamed 10 orks, but rolled horribly on the wounding roll. applying 3 wounds. I didn't want her charging that many nobs, so SandWyrm and I shot the nobs up.

this is where pulling models can help. If Models are pulled right, I would not have been able to charge with Shelia, and kill the Warboss. (if the Big guy happens to be over 6" away)

There are a few approaches to pulling models from large squads. Random pulling, which is useful if you're trying to avoid more templates dropping from the sky. Front pulling, pulling from the side where you will probably get charged after your opponent is done 'softeneing' your unit with fire. Last, is Back pulling, getting rid of the guys in the back who can't really have an effect next turn.

I'll try out vassal if I have time tonight to try to get some diagrams of my examples. Maybe someday I'll try a Vassal game.

Random Pulling:
When mortars and other round templates are falling on your head, sometimes it's best to try to pull the man in the dead center of the unit, rather than the men on the edges, or the rear. This might not exactly be random, but it's a type of thinning the clump. The objective here is to remove models to leave poorer and poorer shots for blasts to hit. This will leave your squad a bit spread out, and you might not be able to get 50% of them behind cover. Some would argue that spreading your force out increases the likelihood of being hit, which is true, but your risk of a catastrophic hit which wipes out your squad goes down.

We'll use the example of the Callidus and Ross's 10 Nobs, with Warboss. This is one time I actually wanted to recommend how to pull models. Shelia flamed over the nobs, hitting 10, causing 3 wounds (real poor rolls) leaving 9 nobs and warboss. I know Shelia (as mean as she is with 2 wounds, and a 4++ save) can't handle that many attacks from Nobs. She's gonna need help. Other units have to shoot into the squad. If nobs are pulled from the front (near Shelia), I have a choice to make. If I shoot too many, Shelia might not be in charge range. If I shoot too few, Shelia's going to get beaten up my the sheer number of hits she's going to take.

To prevent taking a charge, and to be able to shoot and charge in his turn, I might have recommended front pulling to Ross.


Back Pulling:
another option for the same scenario might have been if Ross WANTS his orks to bog someone down, so ANOTHER ork mob can join in the fun. This works well vs. units that don't have special Close Combat avoiding skills like Shelia, or Seraphim (with Hit and Run).
With the Ork mob behind the Nob squad, I was a little worried about them getting a charge on Shelia. If as the Nobs got shot up, Ross pulled from the side Away from Shelia, He would be likely to receive a charge from her, and possibly tie her up until another unit could come during his turn to Assault her, bogged down in the combat. OR if they were from 6-12" away, get additional movement out of charging her.
posted by Farmpunk at 8:32 AM