The Club can't even handle me now! 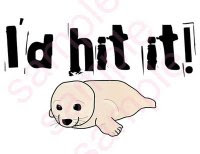 This Saturday I took some of the local gang up to Lafayette for a small tournament. Normally there are about 12 people, this time it was only 8, four of which were us from Greenwood. Here is my confession, I was the Baby seal! I didn't feel like I was playing horribly. Nor did it seem like the dice were against me (with two exception). My list was a slight variation from one that took me to the final tables at a G2D4 tournament. And yet ....I was near tabled every game. Here's the recap.

I had spent the past week trying to get more of my list painted. I made good progress. But with my new feelings about my list, I'm not sure about what to paint next. 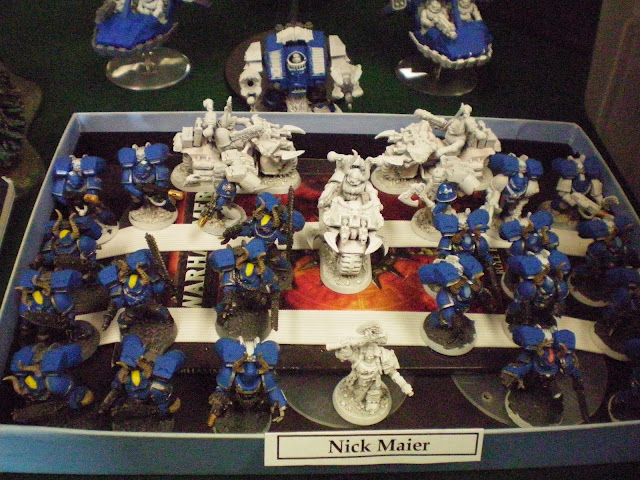 Not the best list ever, but something I'm familiar with and have done decently well with before. 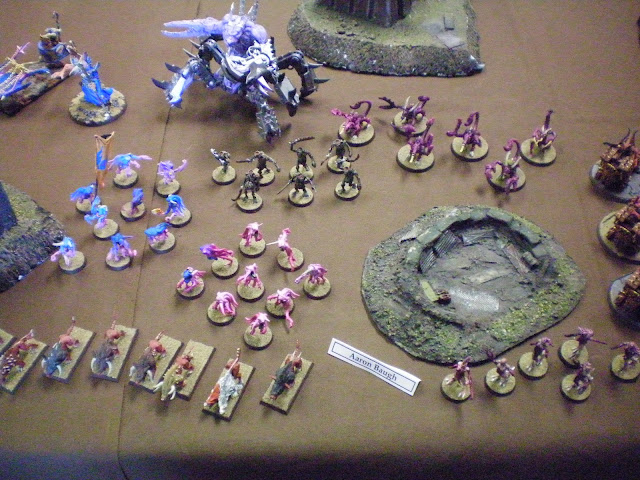 My first Opponent was against deamons. It was essentially Dawn of war with one objective. He wins the roll and makes me go first. I was deciding between deploying with out priests, or trying to reserve everything. I ended up deciding to try to take some board control. The main difference in the deployment was that anything not deployed is in reserves, not coming in turn 1 like normal dawn of war. 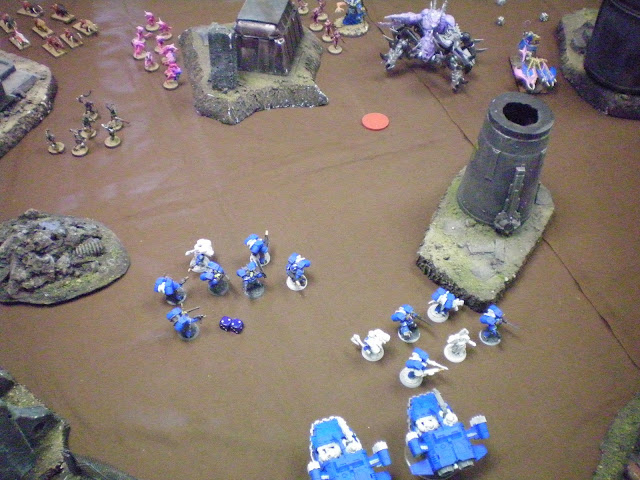 His Tzeetch stuff drops in, and bolt&gaze my squad, I lose about 6 marines in one turn. ouch! Only typhoons come in for me, crap. I pull back waiting for my stuff to come in and help. 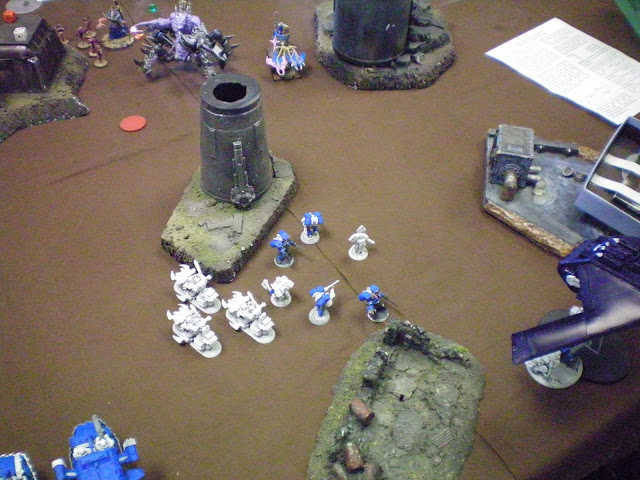 I lose the full other squad save the Sarge, who I jump up, shoots a plague bearer with a inferno pistol, and then assaults in with a power fist killing another and holding them up. 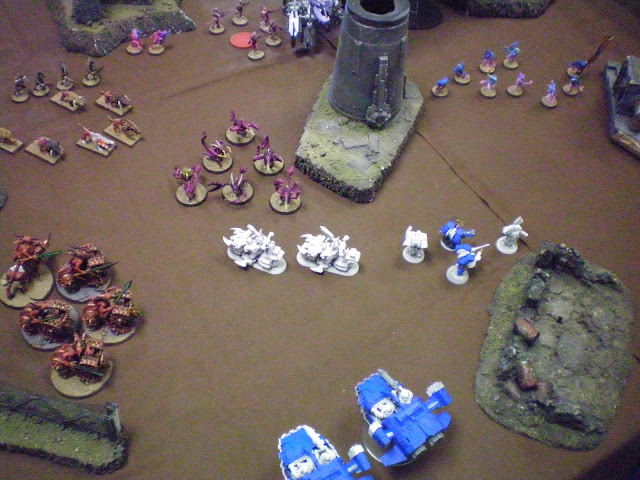 The damage is done, I've been pushed off of the objective and am being over run. 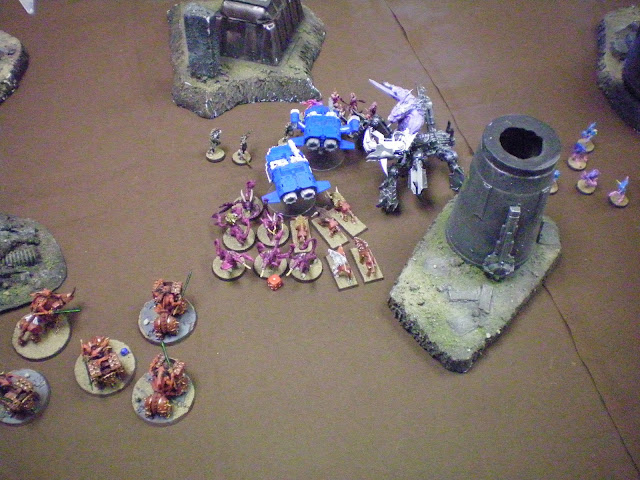 In a Last ditch I turbo boost the storm raven, Skies of blood my dreadnought, and Boost the typhoons to contest. Dread mishaps, the Storm raven wiffs and then is one shot by a Bolt, and Typhoons are assaulted to death. Tabled! 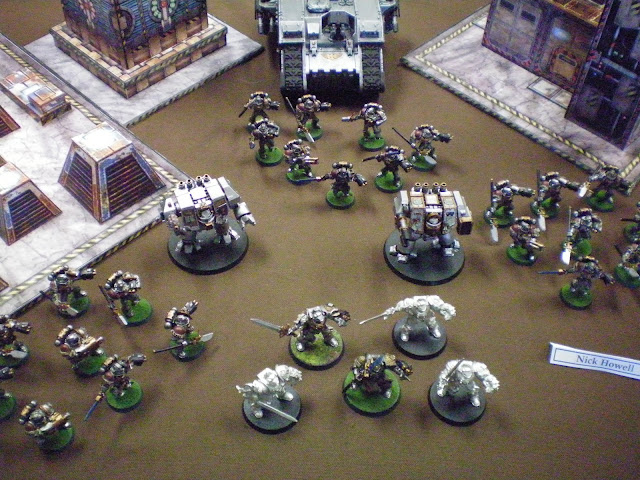 My next game was against a pure GK force using the last codex for the last time. This was the match up I was hoping for. Game 2 was spear head deployment with VP based KPs. 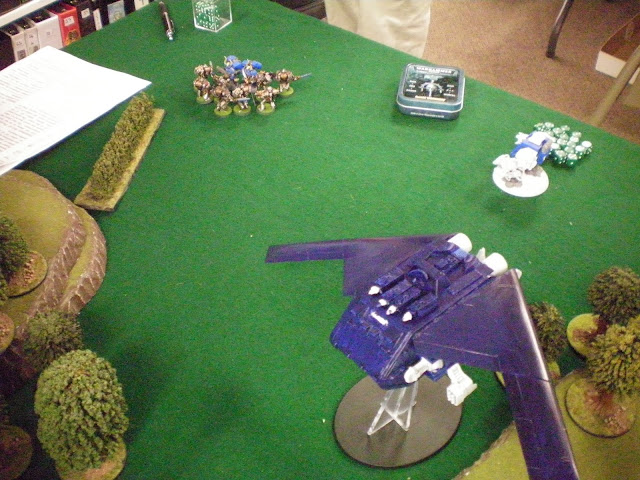 I forgot how annoying Old shrouding is. It made my typhoons useless, so I turbo boosted them for two turns to get the point blank. I reserved my two squads, and boosted SR, bikes and typhoons. Typhoons take out His assault cannon dread, while I dropped off my Furioso to assault some GKs. 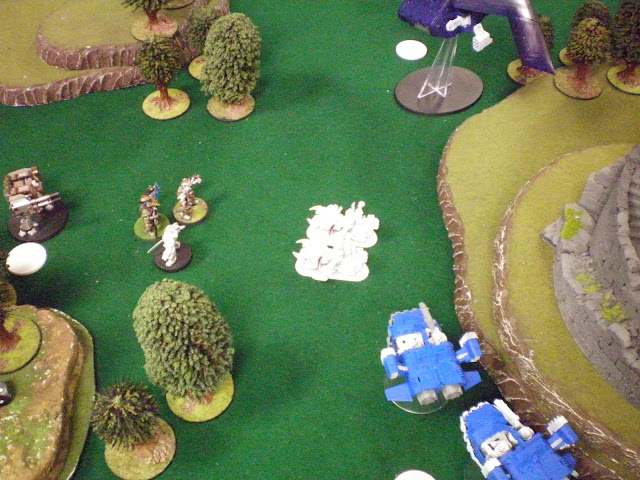 My melta squad came down perfectly behind his Land raider, popped it and braced to take the hit from the two squads that were there. The dread wiped the squad he assaulted, and began a three turn run to assault the squads by my melta squad. My second squad with my librarian was to come down next to his lascannon dread. I placed them about 7" way from it, but of course I scatter a full 6" straight at it. Anything else would have been fine, but being within 1" lost me 7 KPs from that squad (after mission modifications based on VP). Then his terminators came in, and we continued trading fire for a few turns. Plasma cannons did wonders. The game ended with my dread and his dread alive. I won by 1 KP, again almost tabled. 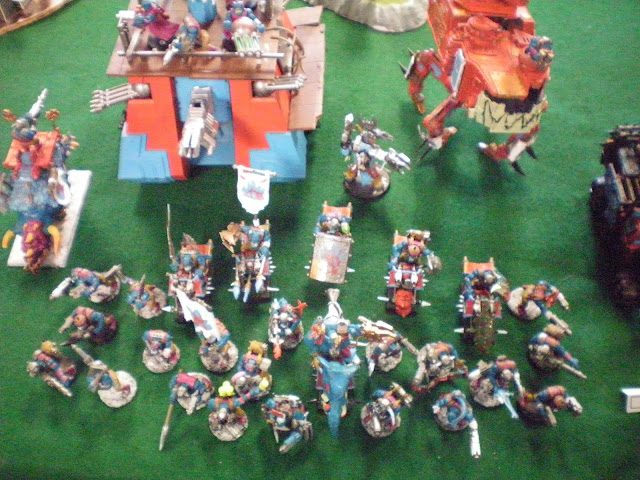 My last game was against my buddies orks. It was pitched battle, and 15 "crystals" on the table that only infantry based models can pick up. I won to go first, and set up to make a quick grab at the majority of the crystals with my jump troops and use my mobility to my advantage. 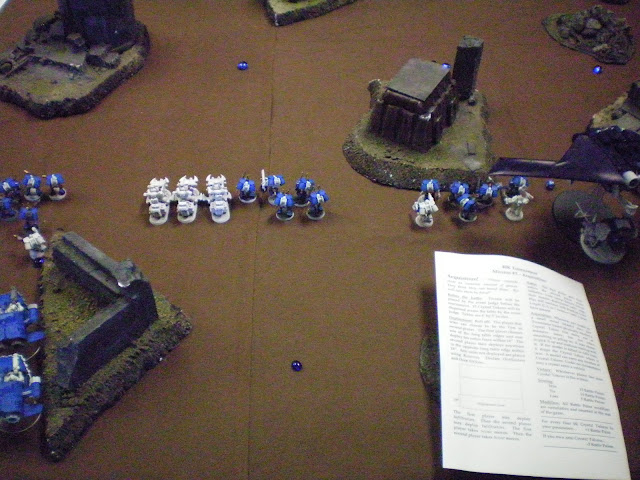 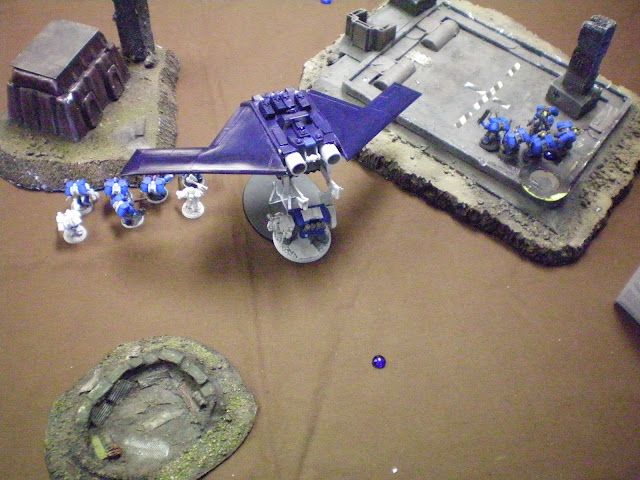 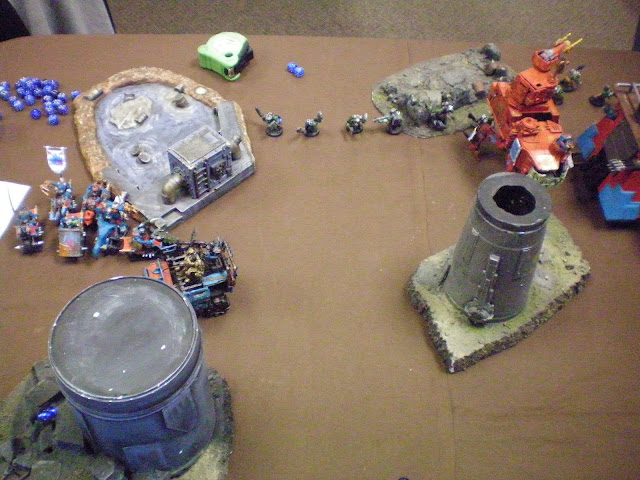 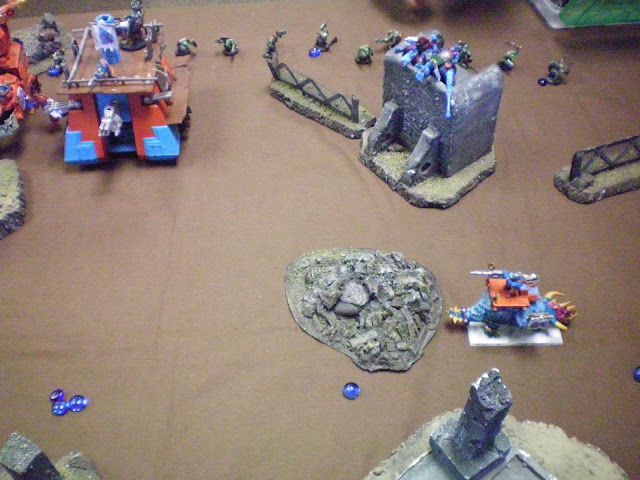 And then He seized the Initiative, drove his Ork trukks up and grabbed most of the objectives. 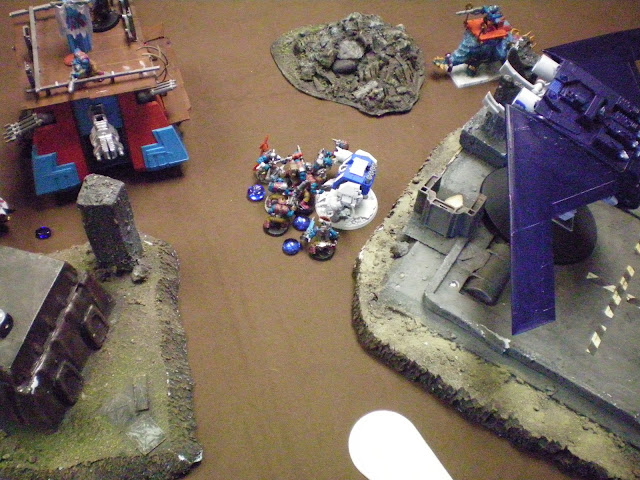 The large bundle of the Crystals were in the middle, right in front of his two deff rollas. I rolled a 1 for my run, and was left in the open. Double deff rolled and then assaulted by ork left a large pile of crystals all in one spot. My dread then killed off that ork squad, and I made the other run away. So 8 crystals were sitting just right of the center with neither of us with infantry near it. His Nob Bikers were closing in from the left side, and he kept deff rolling through my army. Exploding my Dread and wrecking my Raven. 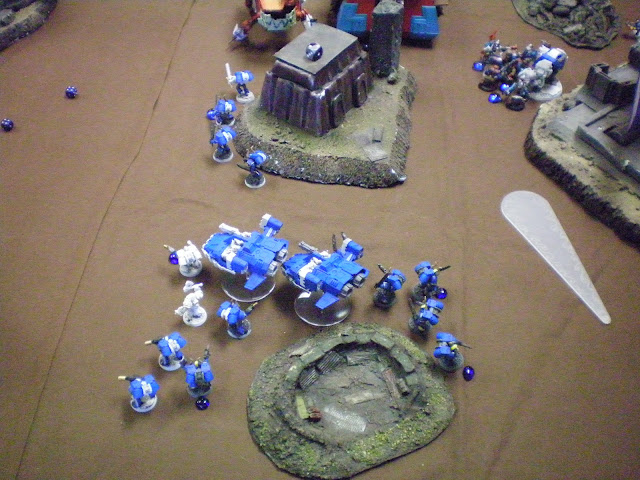 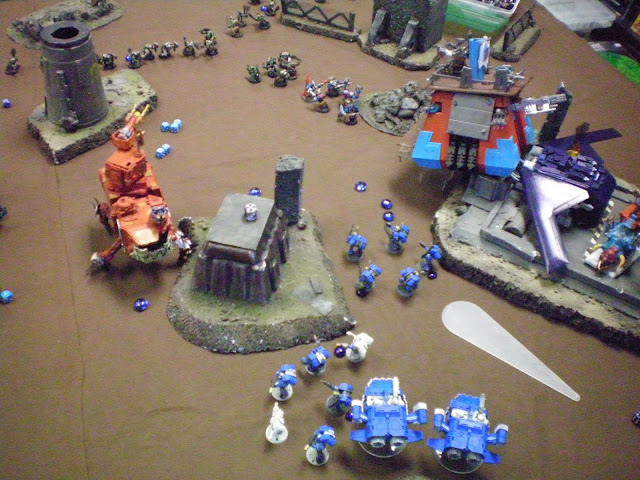 On the last turn he Deff rolled my stacked squad. It was Librarian, priest, Inferno pistol/Powerfist sarge, and 2 melta guns. Of all the models, the only one that failed the armor save was the Lib and was instant killed. To rub salt into the wound I also failed my moral test, Dropping all of my crystals, and falling back into terrain. All five guys landed into the terrain, and 3 of them died.... sigh. Luckily with last turn and 4 plain guys left in a combat squad I was able to jump up and grab at the large pile of crystals in the middle, causing a draw. 4 Bullet shield marines left on the table and I pulled off a draw. 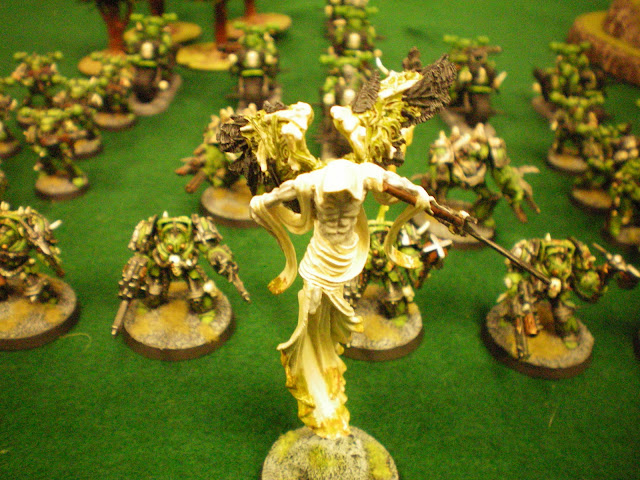 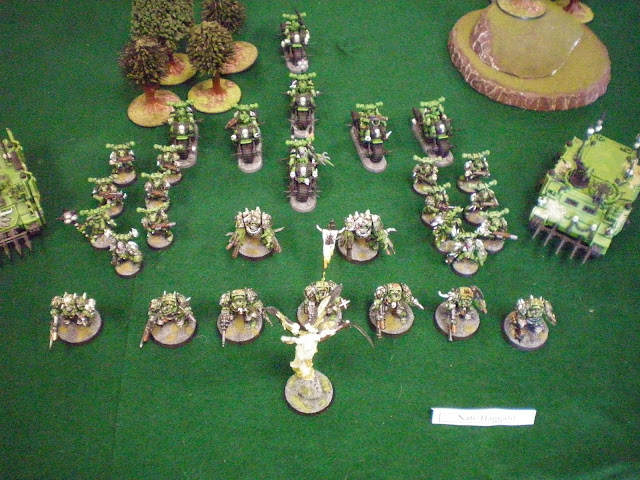 Strung Muppet walked away with first place for the Day. He had brought his Nurgle Chaos marine list that he likes to rock with. Combined with comp, painting and winning all games, he had first place by a good amount.

It definitely wasn't what I wanted the day to be. It was a Comp tourney, but I was expecting that. I am thinking about what I can change to my list to make it work for me. I might just scrap it and start completely from scratch. I'm not sure.
posted by TheGraveMind at 10:17 PM