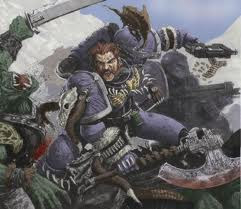 As Uberdark has been rolling his opponents after our first meeting he wanted a rematch of the battle of the newbies we had a few months ago.
A heavy picture battle report that has some great shots! {I have kept the pictures small since there are so many. You can click on the picture for a close up view if desired. Not bad for my cell phone. :)}

Uberdarks List: Something like
HQ
Warboss on Bike
KFF in Battlewagon (with 19 boys)
Elites
6 Nob Bikers with Pain boy and various weapons
Snickrot and 8 commando's
13 Lootas
Troops
19 Boys
3  x 12 boys in trucks
10 Nobs with painboy in Battlewagon
Heavy
2 battle wagons
3 cans (Not sure whre everything goes)
Again this list is a guess.  Sorry for not having the exact list. (Never got the email Uberdark) 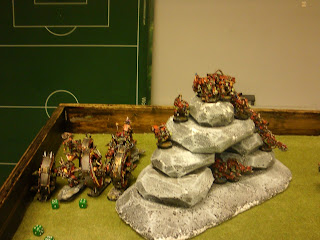 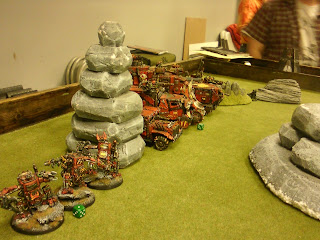 Cans and side shot of Truck Line. 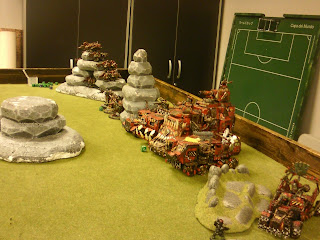 Truck line with 2 Battlewagons and truck. The imperial storm troopers are the objectives. 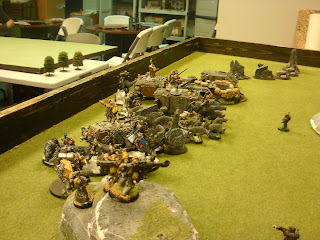 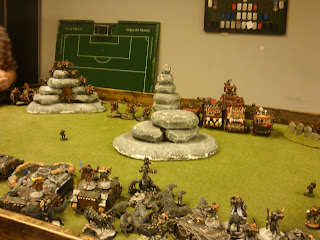 I almost castled in the right corner but decided to spread out more. (Good thing, he would have had me) 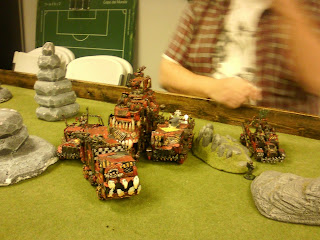 After his first turn move with the trucks. KFF is in giant battlewagon. he shot a lot and didn't do anything from this group. 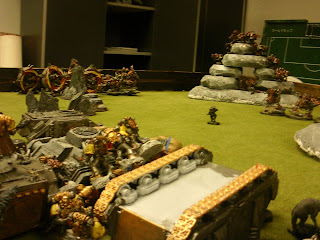 He moved his bikes and cans forward and wrecked Ragnar's Ride.  I am happy with this being the only things destroyed, but it really put my plan on hold. 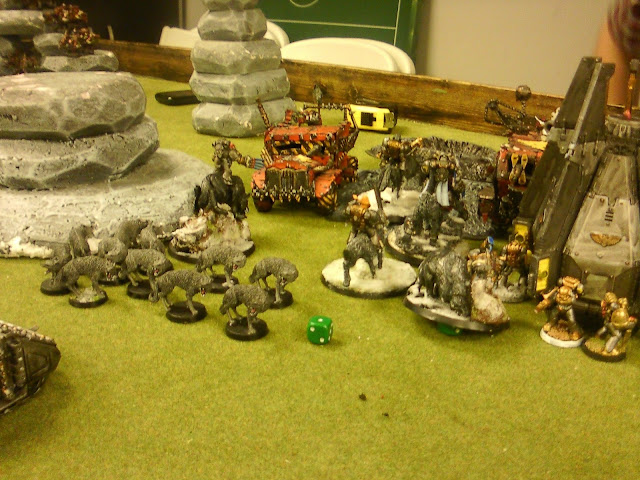 I made this one larger due to everything that happened in my turn 1.  My drop pod dropped in and exploded the Main battlewagon killing only 3 of the 19 boys with Big Mek.  My longfangs wrecked the front truck.  My Fenrisian wolves with Canis moved up and assaulted and wiped out the 12 boys in the front truck. The Wolf Lord and TWCalvary moved, ran and asaulted with Big Mek and 16 boys left. I had to roll a 5 or  to make it to them going over the wrecked truck which was removed for ease of models and is highlighted by the green dice. I passed all my dangerous terrain tests. His unit actually stayed after using his boss pole, and after we found 1 guy under the other battle wagon! My other TWC & Rune priest's Rhino went far left to meet with Nob Bikers, The empty Rhino swooped over and picked up Ragnar and his boys and popped smoke. 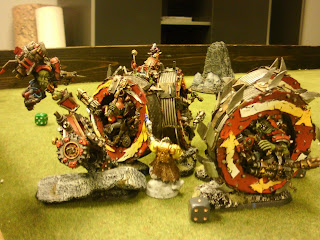 His turn 2 he moved the bikers towards the Rune Priest's Rhino.  The lootas shot at the Rhino along with the cans and exploded it.  This picture shows what is left of the rune priest and his squad after the assault. He needed a 6 to get to them by 1/16 of an inch. Everyone is dead except the rune priest who has 1 wound left. The warboss didn't make it into combat because he was at the back to protect him from Jaws. 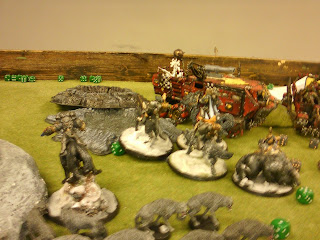 He rammed my Drop pod killing 1 GH, shot and killed 2 more GH. The TW Lord and TWC finished off the Big Mek and moved towards the Battlewagon. 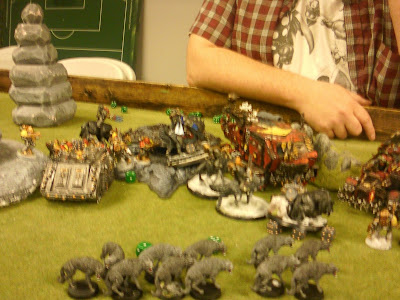 My turn 2 Canis left the wolves and moved around the craters to get at the nobs who would hopefully be getting out this turn. The Fenrisian wolves moved to the right around the wreckage to hopefully assault the Ork boys in the truck.  The double flamer GH pack moved 12 and jumped out hopefully flame the nobs if I popped the wagon. 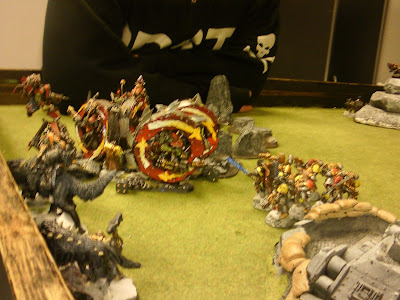 Ragnar got out of the Rhino and moved to assault with the 3 TWC. Ragnar bellow his loud roar giving all units withing 12" furious charge! 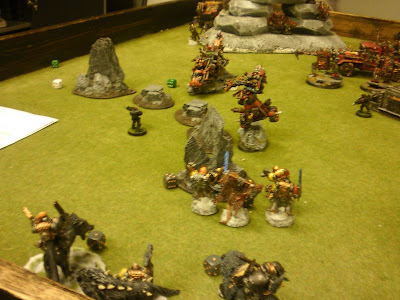 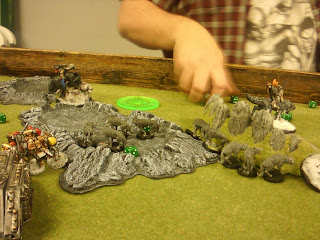 I end up blowing up the battle wagon with the Multi-melta from the dreadnought. I also blow up the Truck with the longfangs, which moves 13" towards the back right corner out of the picture. My Fenrisian wolves cannot assault them so everything assualts the nobs.  I kill the unit and consolidate to these positions. He kills my Thunderwolf Lord, 2 wolves, and does 2 wounds to Canis. Canis would have died, but he rolled a 1 on his third wound from a powerclaw.  Very close battle. If not for the combined weight of everything, and he
would have tied combat or won. 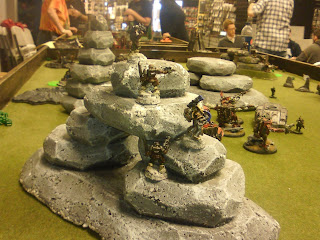 The wolfscouts come in on the side next to the lootas and wipe out the whole unit of lootas due to combat resolution. The orcs really took a beating on this turn. I moved my empty Rhino in front his cans to block and cause a distraction. 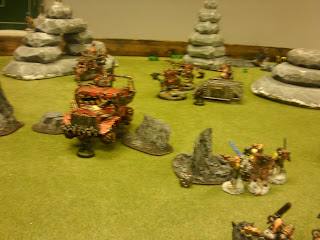 His turn 3 Snickrot still doesnt come in and he moves his truck to contest the objective. His cans shoot at Ragnar with rockets and kil the meltagun! Dang!  His warboss and painboy are not in coherency so cannot rally. 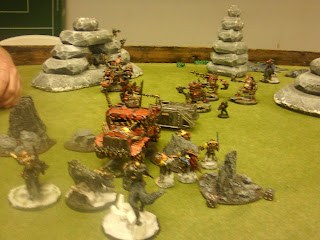 I move in with Ragnar, the combimelta wolfguard and power weapon GH and TWC. I end of blowing up the truck with a lucky shot from the combi melta and assaulting the unit inside with both units. I kill the entire unit, but not before his powerclaw dies and kills my two GH left stealing away this objective before he gets smached by a thunderhammer ! 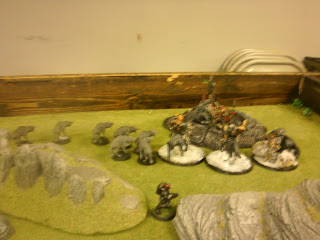 I move towards the unit in the crater. One of only 2 troop choices left. 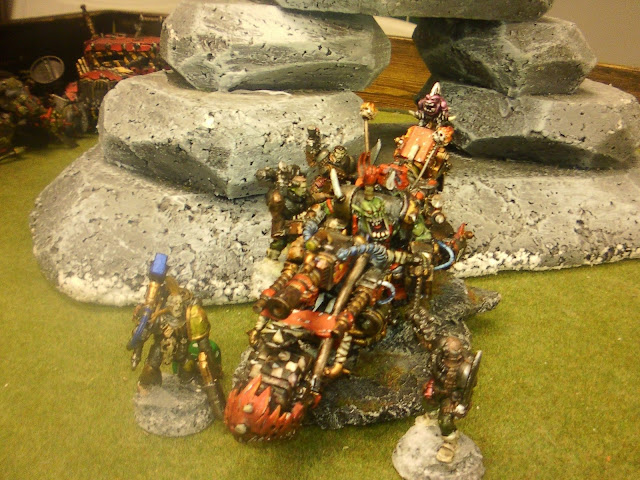 My longfangs shoot and explode 1 of the cans which kill the painboy!!!!. I was going to let the warboss run off the board but now I have to shoot and assault him with the scouts. 2 Melta shots leaves him with 1 wound left. The scouts jump off the rock formation and a wolfscout stabs the warboss in the side of the head before he can crush them all with his powerclaw! 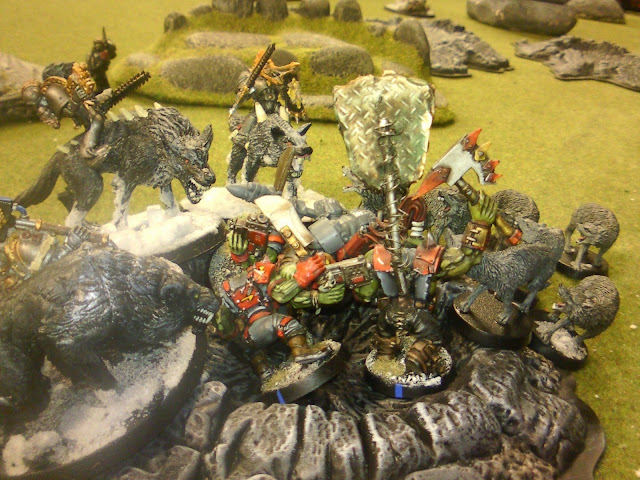 The final stand of ork boys as they get multi assalted by Thunder and Fenrisian wolves! 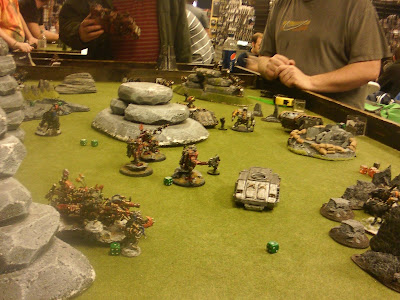 I move my 10 GH to hold the middle objective and move the dreadnought towards the can to protect the same objective. My 3 GH from the drop pod move towards my home objective. I try and intercept the Cans again with my Rhino. 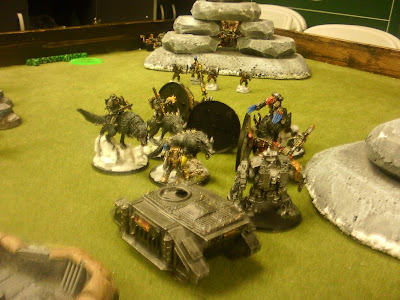 The dreadnought and Thunderwolf Calvary move towards the Cans.  While the cans are turning to face the TWC and the dreadnought, Canis comes in behind and sticks a wolf claw thru the head of the can crumpling it to the ground. 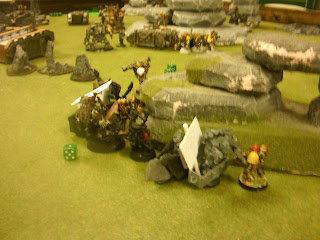 Snickrot comes on and assaults my longfangs on the hill. He doesn't kill enough we tie combat. My other longfang pack comes over and jumps in the fight. 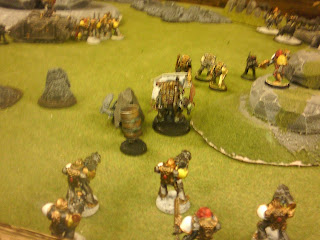 He eventually runs away with only the pack leader left from the first pack.  I line up after he runs on his turn and blow up the rest with krak missles and bolter fire.
An effective battle with a lot of carnage and death.  Uberdark was tabled but fought valiantly.  His deployment was awesome.  I had some great vehicle explosions and the bottle neck crippled his main force.﻿  Uberdark has become a very strong player, and I imagine will learn alot from this rematch as he did after the first battle.  Uberdark has an amazing converted and painted army, and I feel kind of like a child compared to his ability to paint and convert his models.
What I learned:
*Trust my instincts on deployment. I almost lost the game by deploying in a castle formation.  My first turn multi-charge is what won it for me.
*Canis is terrible. Even though he survivied. He almost got killed by 1 orc nob.  No invol save is stupid. I can take a WGB for the same points  with a storm shield and give the fenrisisan wolves the same abilities if I take Saga of the Wolf.
*The fenrisian wolves did better than expected.  I will have to test them again against marines.
*The dreadnought was too slow for my army.  Probably not worth the points.
*Wolf Scouts are getting bettr and better every battle.  Thinking about maybe a power weapon with them.
What my opponent should have done:
*Moved fast with all his trucks on turn 1. Yes he would habve been closer, but you are orks! Don''t be afraid.
*Split the lootas into 2 units.
*Snickrot did nothing for you. Drop him like a box of rocks.
*Moved your cans with your KFF. You needed them on the other side of the board.
Great Game Uberdark! I learned a lot and had fun! Hope you did as well.
posted by Spaguatyrine at 3:23 PM