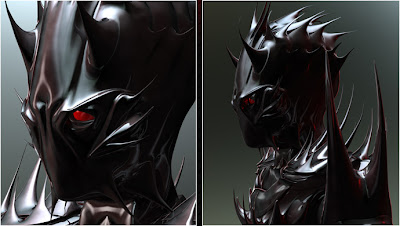 I got down to the North Store a little late last night. By the time I arrived at 6:30, there were already 4 games going on. Usually that means that I have to sit back and settle for either a night of conversation or a small non-competitive game with a new player.

But while I was talking about the new Grey Knights with a couple of the regulars, in walks ZerkeX; a blog regular who came down from Muncie. He didn't blink when I asked if he wanted to play my test list for Adepticon. He had a tourney list to run too. Nice! So we had Gibbs set up a table for us.

ZerkeX had brought along his Shrike Termies. His army consisted of Shrike, 2 10-man Assault Squads with jump packs, 2 10-Man Thunder Hammer/Storm Shield Terminator squads, and 2 10-man Tac squads with lascannons. Shrike was attached to one of the Assault Squads, which I was told had meltabombs.

Here's what I was running:

I rolled a die for the mission and it came up a '6'. Crap. An Annihilation game. I was coming in with 17 KP to his 7 KP. No matter what I did, he was likely to win this game. Even the Emo-Wing would have trouble with the 11-12 KPs it has to give.

ZerkeX rolled a '3' for deployment. He then won the roll for first turn. Here's a shot of our setup after Shrike's infiltration and my scout moves. 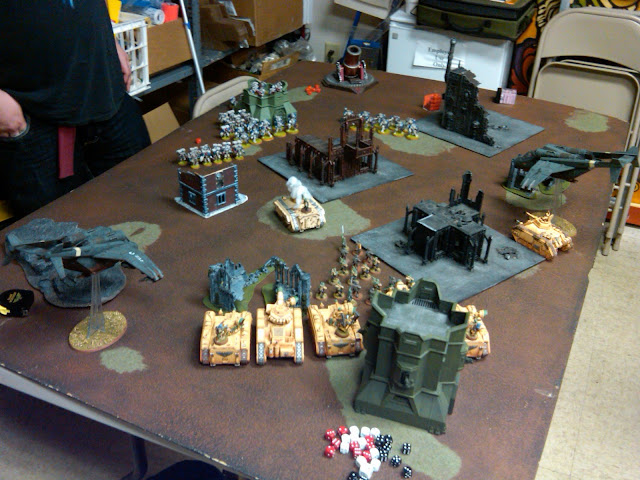 The Stormies are up front to give Shrike's unit something to pounce on instead of my line or the nearest Vendetta. My plan on the right is to harass and distract the Termies on that side with the Hellhound and Vendetta. I've also got the Plasma Vet unit in reserve. 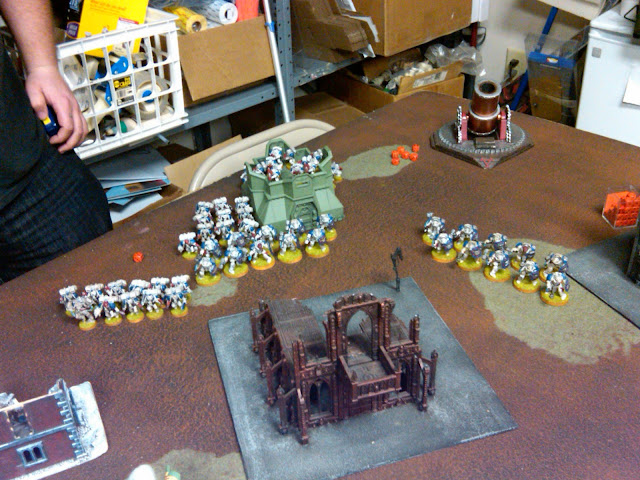 A close-up of ZerkeX's deployment. His Tactical Squads are bunkered on the baby-bastion, which we decided to treat as a ruin. It's hard to see, but both squads' tails are hanging out the back. 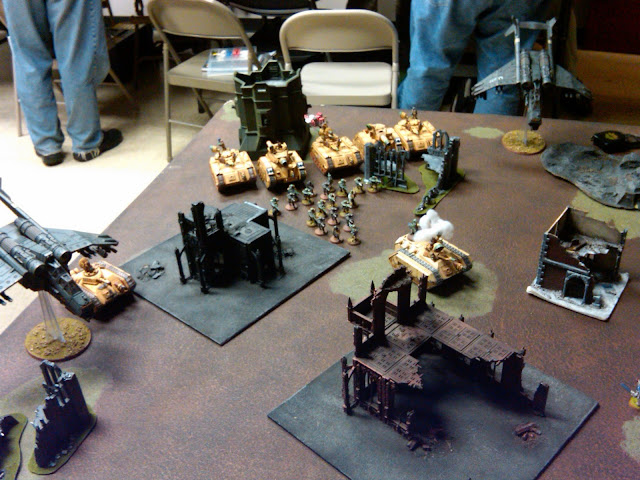 And here's a close-up of my side. 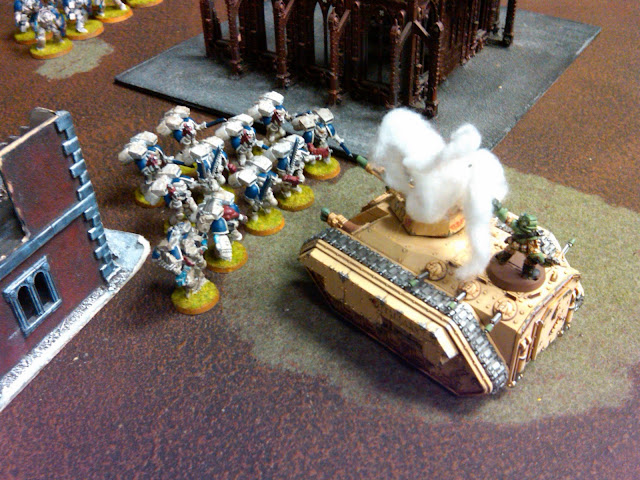 Shrike's unit takes the bait and moves up to assault the Stormtroopers' Chimera. 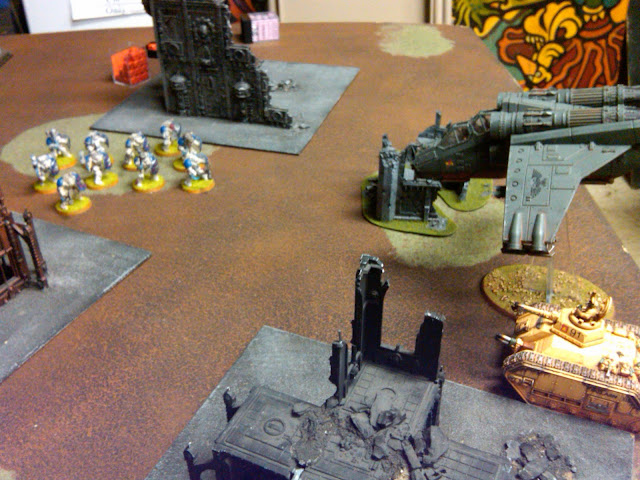 His Termies on my right advance. 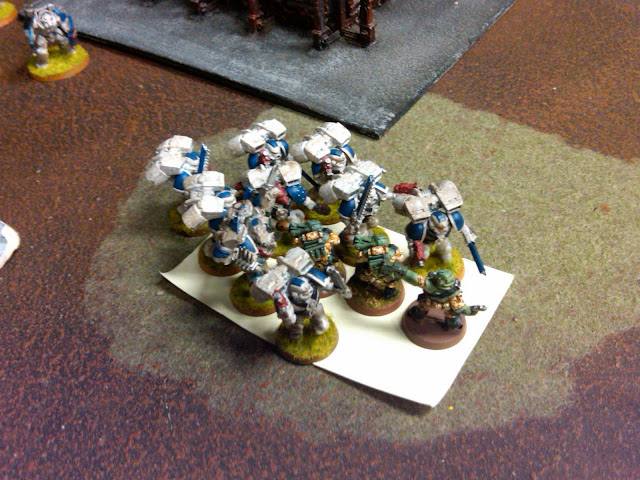 I'm hoping that the Stormtrooper Chimera will take a while to beat down, but ZerkeX's lascannons go right through it's smoke and explode it. Shrike then jumps on the squad. Well, at least he's not up on my line yet. 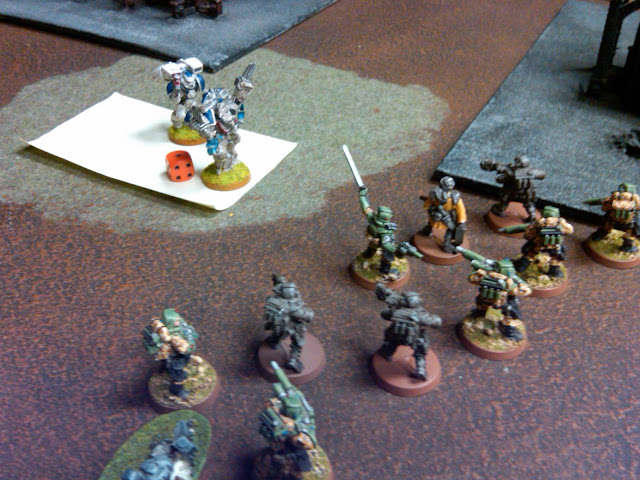 On my turn, I let Shrike's unit have it. The Demo-Vets lob their charge and rake him with their flamers. 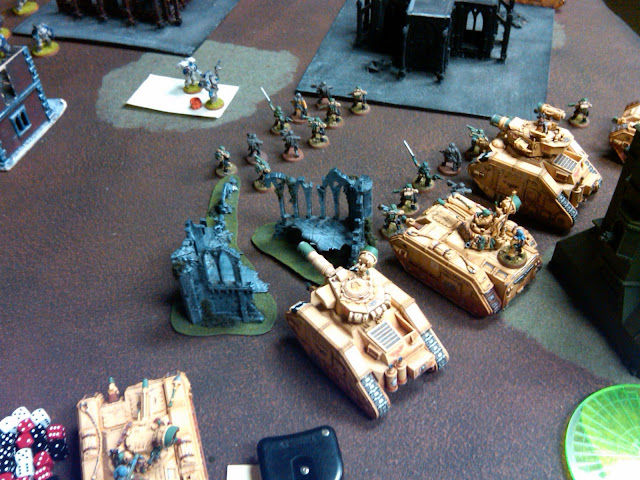 Combined with supporting fire from my Russes and Chimeras, there's not much left of Shrike's squad. 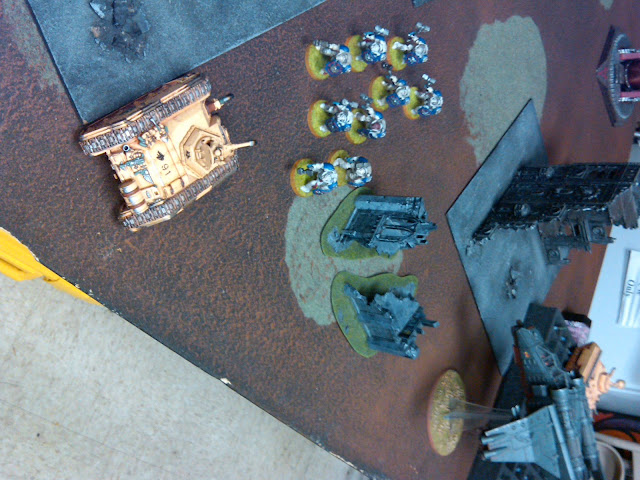 My Hellhound attempts to move 12" to the left of the oncoming Termies, but immobilizes itself on the difficult terrain it attempted to cross. Great. He's dead. I kill a Termie with the Inferno Cannon. The Vendetta scoots over to the corner of the table to play keep away. 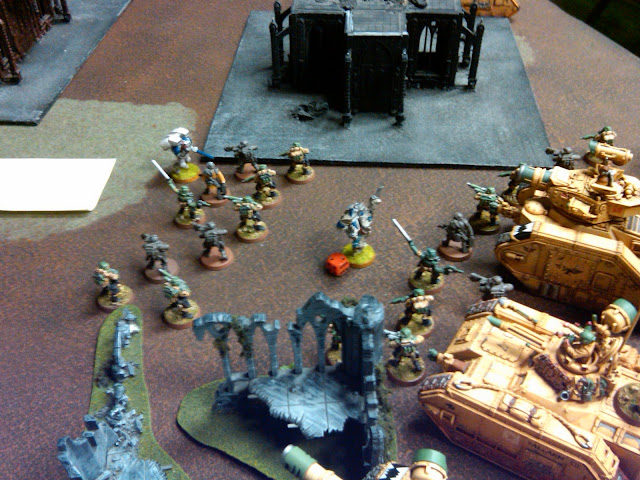 ZerkeX decides to split Shrike's squad and assault both of my blocking squads at once. That seems... optimistic to me. My instincts are proven correct when Shrike is killed in assault by the squad he charged. The lone assault marine survives, but doesn't kill anyone. 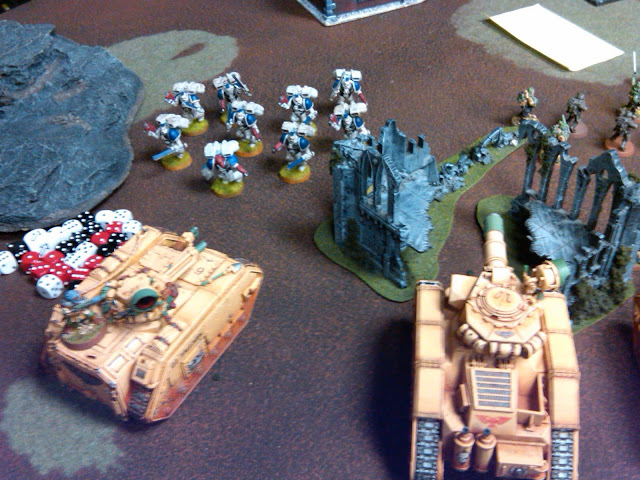 The other assault squad is moving to my left to engage a Melta-Vet Chimera. They wreck it in assault and the squad tumbles out behind it. 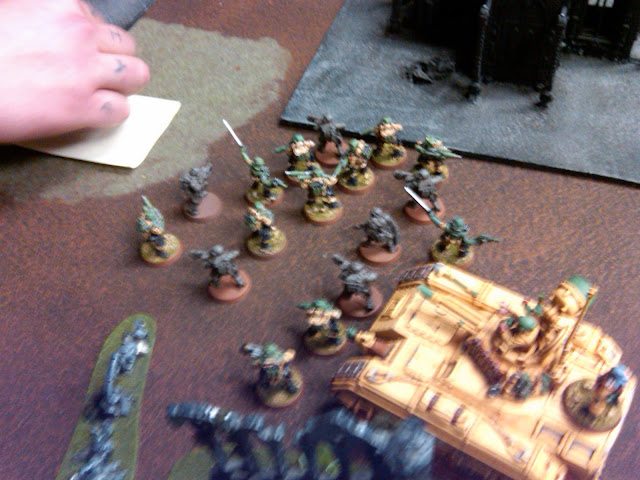 On my turn, the front Demo-Vet squad finally beats down the lone Assault Marine and spreads out a bit to prepare for the oncoming TH/SS Termies.

To my left, the other assault squad is decimated by a couple of battlecannon hits and my meltas. Leaving just the Sergeant and a lone trooper alive. 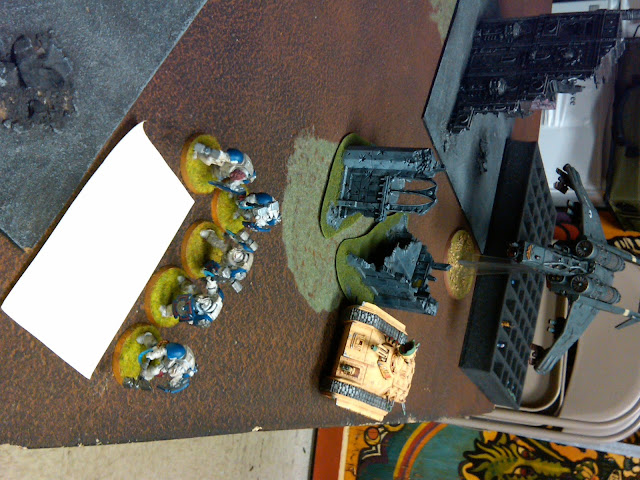 On my right, the Hellhound blows up after being assaulted by ZerkeX's termies. My Plasma Vets come in from reserve though, and kill a few Termies with their Plasma Guns. With help from the Vendetta on that side, the unit is now down to 5 models. 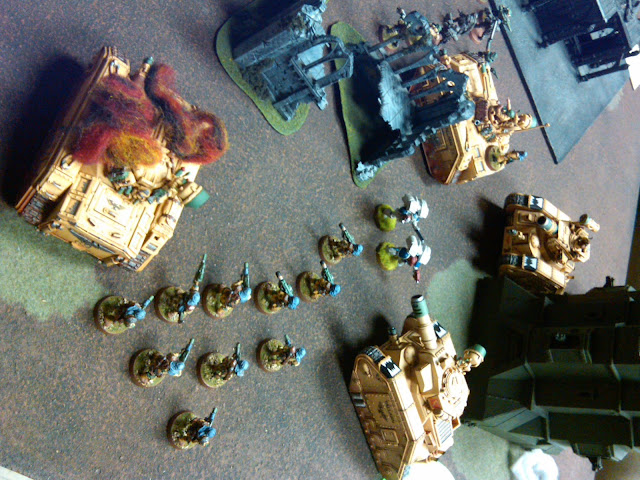 The 2 surviving assault marines move up between 3 of my tanks. ZerkeX ponders his choices for a bit and decides to try and assault the Demolisher; presumably to help protect his Termies.

In retrospect, I think he would have been better off taking out the Russ because it was not only easier to kill, but because it was the only long-range anti-infantry unit I had. It didn't really matter to the game much whether or not I killed his Termies. But if I can kill or run off his bunkered Tactical Squads, I actually have a chance at winning the game. 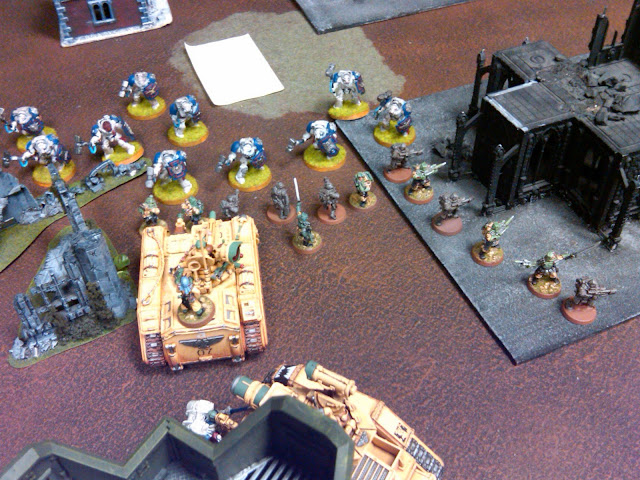 Here comes the fresh Terminator unit to play. They assault my first line of blockers and hit twelve times with their hammers. ZerkeX then rolls EIGHT ONES and only kills 4 of my Vets. They appreciate their luck and then high-tail it for the back of the table. Well done boys! 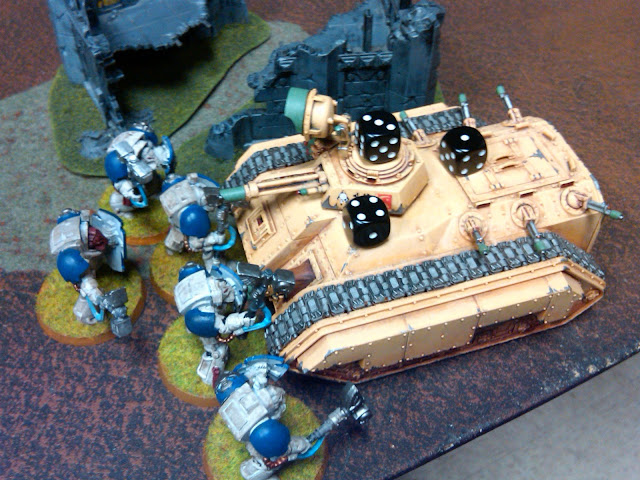 Over on my right, the 5 Termies from the other squad assault my Plasma Vets' Chimera. It's immobilized and can't shoot, but I'd call that a lucky result. On my turn I get out, back up, and kill 2 more Termies with plasmas and lascannon fire from the nearby Vendetta.

During the assault phase, the Termies take their free hits on the Chimera and blow it to bits. The two surviving Assault Marines charge the Demolisher. They've got a fist and a crack grenade, but whiff their attack rolls. On my turn, I move the Demolisher over so that these two are caught in a melta gun crossfire. They go to ground and make a surprising number of saves, but I take them out in the end. :) 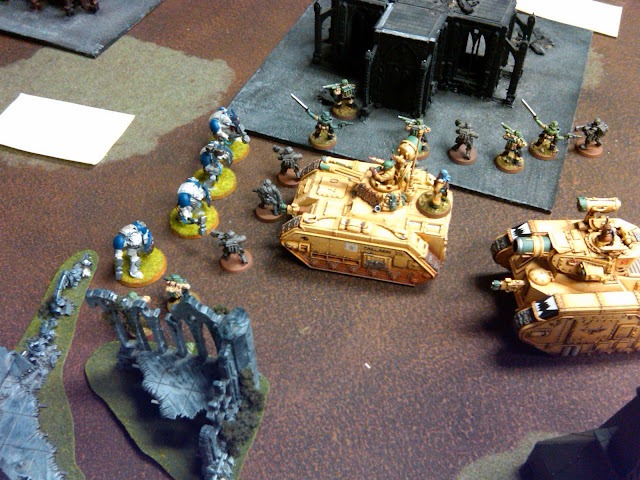 On my turn, the running Vets are too close to the Termies and run again, though not very far. An order from my Company Commander forces them to rally later during my shooting phase.

The other Vet squad moves to block the Termies and does the flamer + demo charge 2-step with them. The Demolisher, Russ, and left Vendetta back them up; the Company Command Squad shoots it's meltas too. When the dust settles, there's only 4 Termies left. They then fail their Morale check and run! 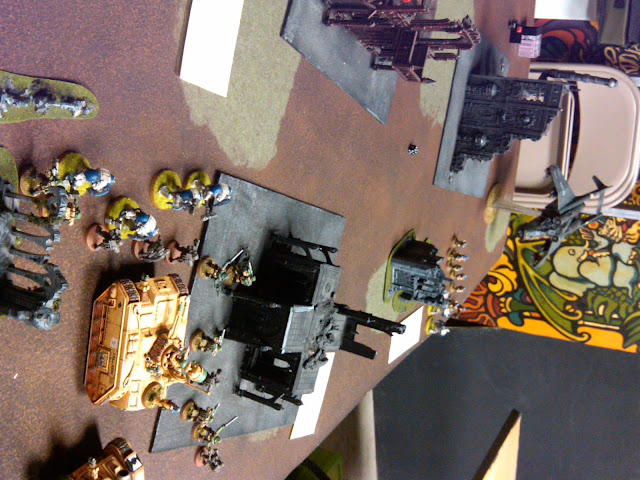 Over on the right, ZerkeX's last 3 Termies make their way through the Chimera wreckage and smite the Plasma Vets, who run off the table.

Over on the left, the 4 remaining Termies find their honor and rally. Fleeting their way back to my line, where they assault and kill my blocking squad.

On my turn, the Vendetta over by the where the Plasma Vets ran makes a full-out run for the center of the table.

On the left, I torrent down the last 4 Termies.

Turn 5
On the right, ZerkeX's last 3 Termies chase down the Vendetta, but they need 6's to hit and don't roll higher than a 5.

On the left, ZerkeX's Tactical Squad Lascannons finally manage to immobilize my Vendetta with it's nose facing my side of the table. ZerkeX has been shooting at the Vendettas all game long, but this is the first real damage result he's gotten.

When my turn comes, I start scrambling units towards the center of the table. I manage to kill 2 of the Termies that are chasing the Vendetta; leaving one survivor.

My Russ takes a shot at the 2 Tactical Squads in the baby bastion. I get a direct hit and ZerkeX goes to ground for a 3+ cover save. I still kill 3 models in one squad and 2 in the other. At the end of my shooting ZerkeX passes both his morale tests.

Conclusion
The store is closing at this point, so we end the game. I've done amazingly well at limiting the damage done to me. ZerkeX only scores 6 Kill Points against the Tallarn 13th. But in return I only did 4. Even though his forces were decimated and mine controlled the field, I lose. Had the game gone on, I would have killed the last Terminator and maybe run off a Tac Squad. But he also would have probably killed a tank or a Vendetta with his lascannons; then it would have been a 7-6 win for him instead of a tie.

This is why I bleeping hate Kill Points.

I really don't think that seventeen KPs unusual or extreme for a Guard Army. Even using platoons and squadrons, there's no way that I can make an effective force of less than 14-15 KP at this point level. Dark Eldar players probably feel my pain too.

I can take some consolation from the fact that I was testing a tournament list. In either the NOVA or Adepticon formats I would have been able to win the game. Adepticon's missions give you 3 overall objectives (such as KPs, HQ Kill, and Table Quarters) and the player that completes two of them wins. In the NOVA I believe you need to win by 3 or more KPs over your opponent. Or you tie and go to the next tiebreaker, which I could handle.

Grumbling aside though, ZerkeX was a pleasure to play. He knew his rules well and was quite friendly. His whole army was painted too, which is always nice. I'd play him again without hesitation, but maybe with the Emo-Wing next time. ;)