I took my son to play magic monday night and was able to get a game in with Courageous Carl.  I wanted to see how the 1500 pt list I posted worked against a tough MEQ army.  He had a pretty tough 1500 point list.  He had...

Carl wanted to play pitched and annihilation so I agreed. I won the roll to go first and selected the deployment below.

I rolled 1 for Grand Strategy and gave re-roll 1's for the paladins's. (Ugh) Was hoping for at least 2. 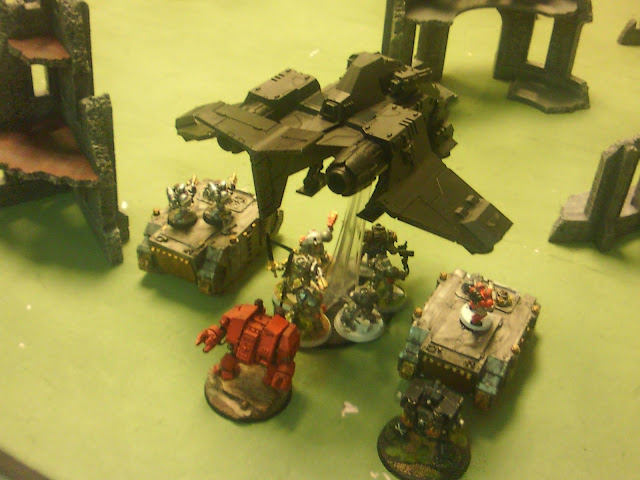 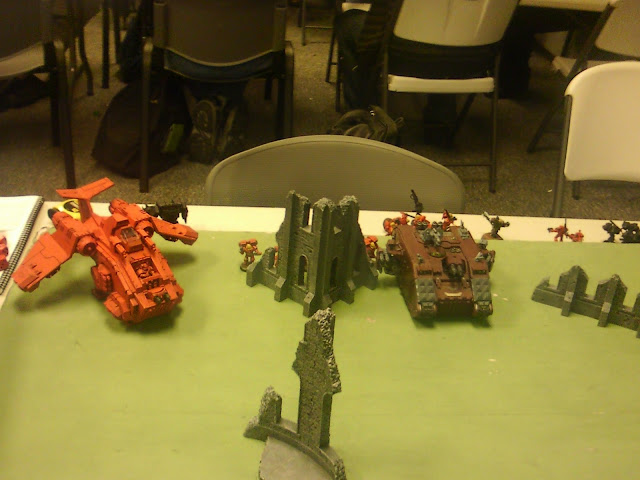 His Deployment
Turn 1 I moved flat out and casted shrouding with the Storm Raven. I made a mistake by not moving my Rhino's due to forgetting they were not 36" range like the old psycannons! (Ugh) The Autocannon dread shot at the Storm Raven and Immobilized it.  I shot the Twin Linked Assault cannon and stunned the Raven.

His turn 1 he moved eveything forward and with 1 lucky shot took down my Raven. I failed my 3+ cover save. (Ugh again!) I disembarked with the dread on the left of the Raven to get a cover save if shot at and the squad on the right to try a multi assault.  He moved 12 shot with the Raider and did nothing. The Death company came out jumped 12 and shot at the termies but did nothing as well. The assault marines jumped and ran towards me.
My turn 2 would hurt him pretty bad.

The dread moved forward shooting into the death company, the termies moved fowards and fanned out to hit the 5 man assault squad, the death company and the landraider.  The auto cannon dread moved forward to shoot along with the rhino's moving 6" to shoot their psycannons.  The libby casted warprift and removed 1 death company and stunned the Dread. My rifle dread exploded his dread. I shot into the death company and 5 man assault squad but did nothing else! He makes way too many 3+ saves!  I assault the Death company but have to roll for diff terrain so only make contact with the landraider and death company missin the assault squad by 1". (Ugh Ugh! a trend is showing) The psycotroke greanades cause Lemartes and the death company to strike at initiative which basically kills the whole unit without them being able to strike.I also casted hammer hand and might of titan to make them str 6 with +2d6 penetration. I roll a 13 for my hit with the halberd, but fail to hit with my strength 10 hammer +2d6.(Yes that is disgusting) I needed 6's since he moved 12". I consolidate and stand right in front of the assault squad and Landraider daring him to come out and play. 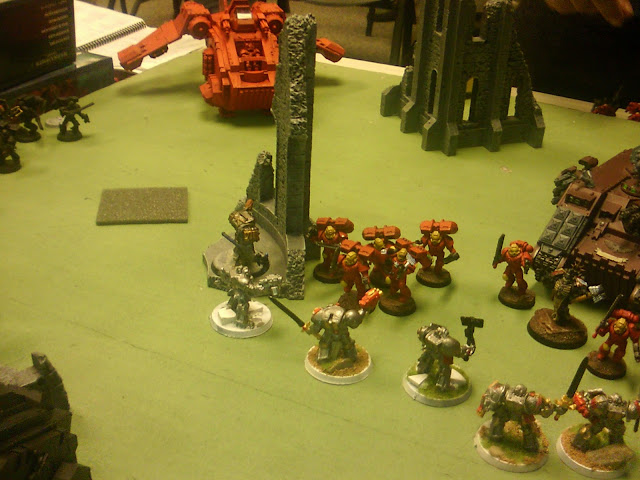 his turn 2 he comes out and shoots everything at the terminators. He kills 1 model with a meltagun shot.  I take 1 wound on the Grandmaster, Sword, and Halberd.  He shoots 8 assault cannon shots, 18 twin linked storm bolter shots, 2 metla gun shots, and 14 bolt pistols. Not bad! Having 2 wounds and allocation definitely helped.  He shoots the multi melta at the dread and hits but does nothing.  His assault phase ends up killing the hammer and the librarian with a powerfist.  He also kills the master crafted sword model. I kill 4 of his guys and he only does 4 unsaved wounds with all 5 attacks. NICE!!!!  We tie combat and I have the Halberd Termie and the Grand Master left.  I let a kid roll for the psychotroke grenades and of course he rolled a 1.  Go figure. 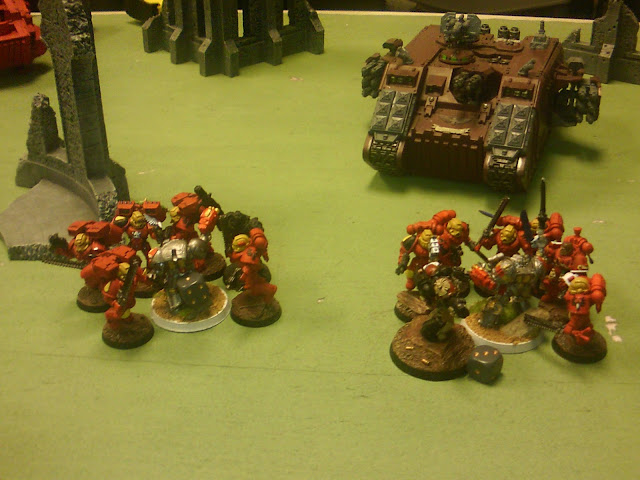 My turn 3, The dread gets in the fight with the assault squad, and the 10 man strike squad get out and just make it into combat to make it even numbers.  I shoot at the Raven with the autodread and do 2 more penetrations but stun and shake it again.
After the assault, I kill everyone except Chaplain who make 3of 4  invol saves, the sang priest, the pweapon sgt and 1 marine.  They are fearless and do 0 wounds. He passes all 10 fearless saves on his 4 guys!! Really?!!  I move into base with the Grandmaster and the rest of the srike squad. I consolidate the Dread towards the Raven in cover. 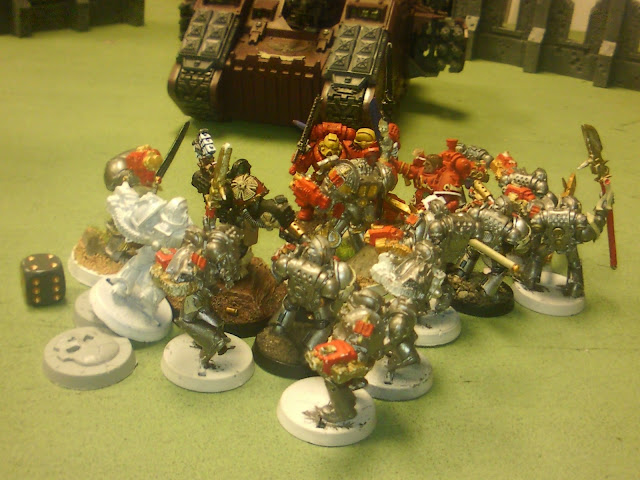 
Good:
The psychotroke grenades are worth 15 points!
Psycannons penetrated and glanced a land radier at a pretty high success rate. 25%.
The Paladins were pretty awesome.  Should have taken 2 halberds instead of 2 swords.
The librarian's might made a huge difference.


Bad:
After the Librarian, Raven, and DCCW died I had a very hard time with the raider.

Stike Squad only having 1 attack base.
Storm Raven Dieing so fast. Again.
Overall:
It was a hard fought game by Carl. The Grey knights did very well.
I need to not be afraid to use the 10 man strike squad to move forward with the Raven.
I am gong to keep on this list for more test games.

What are your thoughts or observations?
posted by Spaguatyrine at 9:15 AM