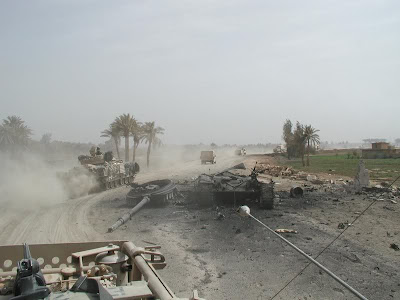 Old School (Terminator?) is looking to get some feedback on his new Tallarn list. I'll snowmobile my comments into his email. :)

Old School here from Dark Future Games and as you can see in this post http://darkfuturegaming.blogspot.com/2011/02/arabian-knights-tallarn-praetorian-old.html, I have come into the guard in a major way with an army that I am more than proud to show off - the Tallarn. While I am not above using any special character from the dex, I would like to try my hand at Al' Raheem just because I like the idea of it (all I have on guard experience as a player is an idea, lol) and I like the idea of controling so much of the board when the Desert Tiger and his boys swoop in.

I'm not a huge fan of Captn' Al at all. This post from earlier this year pretty much sums up my objections.


Here is the list at 2k right now. Everything is fairly self explanitory.

Well first off, every single Chimera in your army needs to have a hull heavy flamer. They're what we have instead of assault troops. They'll also kill more Orks in one round of firing than you will kill with that heavy bolter all game long. There's also the issue that you should be moving your tanks - always. So you'll only be firing one weapon per turn anyhow.

Extra Armor on everything is also a no-no. If I add up all the extra armor in this list I get 120 points. That's enough for a squadron of Scout Sentinels with Autocannons. For 10 points more you could get a Hellhound or Vendetta. So go with the option that gets you more bodies and firepower.

A plasma pistol on your commander is OK if you have some points to spare, but...

...putting them in every vet squad is a no-no. Adding up all the plasma pistols in this army gives you 30 points. So now we're up to 150 points of fat. That's enough for a Russ!

If I was running Captn' Al, I'd do it as follows (regardless of point level):

The idea is that you're outflanking a close-combat blob onto an enemy objective. That's what Al is made to do (just look at his orders). Of course, this assumed that your opponent is stupid enough to put an objective or other juicy target near the board edge after he sees that Al is in your list. Since Al can't do anything but outflank, you become tactically predictable. Which I consider to be a terrible downside.

I prefer Vets for this job. Since SWSs can't threaten an alpha-strike on the other player's tanks.

Lascannons are OK on Vanilla Russes (10% addition to the Russ's price for a 7% anti-tank gain). But Demolishers are meant to be up in mid-field. So heavy flamers are the way to go every time.


I am not entirely clear on the Special Weapons squads actually being able to deploy in the Vendettas per Al Raheem's rules.

I think that the platoon rules will override the Vendetta rules. But it's open for debate.


Also, I think that in some missions the outflanking and the master of the fleet would actually help the enemy in late turn scoring,

Yep. The forced-outlfanking more than the Officer of the Fleet.


but as I have little experience, I am totally unsure. I would like to know what you would do with Al' Raheem and how you would make it work at 2K and maybe even 1850 if you feel like it. Just let me know if I am out of my mind or if I am heading in the right direction.

Thank you for your time,
OST
Dark Future Games

You're going in an OK direction. But I think you'll get sick of Al pretty quickly. So leave your options open.
posted by SandWyrm at 3:03 PM