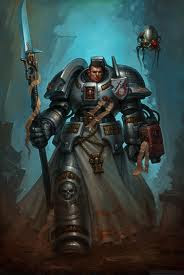 So I actually got 1.5 games in before our mega battle for our escalation league today against ....

I don't have a full battle report, but do have my pro's and con's of my list and the Grey Knights.

The first game was against Big Daddy Jim. We rolled seize ground with 5 objectives and spearhead.  I won the roll and elected to have him go first.

He had something like:(I think. This only got to 2 turns)

By making him go first, I deployed with a giant bubble wrap around my Raven in a back corner to prevent a drop and go with bolt.

We had to go to our mega game so ended the game.  Now Big Daddy did get flipped, but I believe if we would have finished the game, he would have had a hard time to stop the firepower of the list.

The Storm Raven did very well getting a 3+ save from the Librarian, then shooting the bloodthirster down a few wounds.

*VIP Award goes to the halberds. Even though they cost more points, they made up for it in every combat.  2 points per purifier should be on each guy you can get!

*The rifleman dread did a great job hitting the princes. He is a keeper.

*Purifier squads are great vs horrors and flamers.

*Having your guys in Rhino's in non-negotiable. Moving 12", jumping out to flame or psycannon a unit and wrapping around the Rhino for a potential cover save is great if you have halberds to still hit first in assault!!!!!!!!!!!!
The Second game was against Dodger3, who happens to be the best Daemon player I have ever seen.
He had:
Lord of change
Fateweaver
2x 4 bloodcrushers
2 5 man plague bearers
11 Seekers
1 Daemon prince

The battle was the same with Seize ground 5 objectives and spearhead. He won the roll and made me go first.  I deployed in my vehicles and moved flat out with the Raven and popped smoke on 2 front RHino's, also casting Shrouding and having 3+ saves to the three.

Of course  dodger3 got flipped against me. (which seriously happens 50% of the time I play daemons)  The big guy upstairs is looking out for me :).
He dropped what he had and didn't do much. He dropped bloodcrushers, 2 plague bearer units, the seekers, and 4 bloodcrushers.  I made a daring move and moved both purifier squads forward 12, jumped out and flamed the seekers as well as shot a lot of storm bolters at them.  I killed 7 of 11 in the shooting phase. Other shooting from the Storm Raven, and the dreadnought with the assault cannon put the crushers down to 2 having wounds.
He dropped his lord of change and a prince.  His bloodcrushers assaulted my 5 man purifier squad in the front and wiped them up, but I killed 1 crusher and wounded another before dieing horribly.  My other purifier squad was assaulted by the remaing seekers.

Cleansing flame killed 2 and my 2 halbeds killed a 3rd leaving him with only 2 left which I killed after he had his attacks.  Without the cleansing flame, he would have wiped that unit also.  So the moral of the story is take halberd with your purifiers for hoards.   I also read the psygrenades wrong as I thought they worked even if I was assaulted.  I would not have gotten out to be easy meat for the crushers if I hadn't made that mistake.

The rifleman dread took out the prince pretty easily. The psycannon purifiers stayed back to claim 2 objectives.

The game ended with the Grey Knights having 3 objectives the the daemons 1.

*Take out Crowe as his not being an independant character is kind of blah.

*Keep the Librarian for now but find a way to get a grandmaster  with psychotroke grenades in the list to make the purifier's scoring, or the dreadnought. (I know some disagree with the wording).  If I take out the 150 for Crowe I would probably just remove some points to get what I wanted.

*One savings is to drop 1 purifier squad and make 1 unit 10 strong with the 4 free incinerators saving 40 points.  I would have to take a basic strike squad which might make the list a little more balanced against deepstrike.

*The Storm Raven got exploded on his turn 3 which kind of sucked for me as I couldn't roll very high to get out of terrain, but overall the army did very well.  I want to try it against a regular MEQ or Guard army to get a better feel for it.

*The terminators are incredible in close combat. The 4+invol with the swords is awesome and the init 6 works great. The might and hammerhand combo is also awesome to make a unit even higher strength.  I am going to look at possibly doing this list with Paladins at 1750, or fitting them in with only 1 dreadnought.  The dread on the Storm Raven was just ok.

Back to the drawing board and more test games coming up.

Thoughts?
posted by Spaguatyrine at 8:41 AM