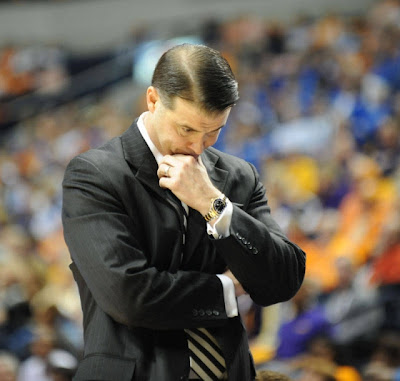 Ok, let's do a quick rundown of my NOVA games and then we can discuss what worked in my list and what didn't.


Normally I run a much more in-your-face all-Vet list, but I had 2 big unknowns going into this tourney that worried me. Those were Grey Knights and Dark Eldar. I knew that properly run GKs could murder me at 24" (just outside of melta range). I also knew (from comments made here by readers) that I hadn't faced a top-tier Dark Eldar player yet, so I wanted the ability to down as many Raiders as I could early on in the game. Both of those solutions required more long and medium range fire. If I could use that same fire to kill Thunderwolves too, then all the better.

Also, it's a fact that my all-Vet chimera force has been decreasing steadily in effectiveness for a while now. Mostly due to the increased amount of terrain that we've been using locally. It hadn't reached a crisis point for me yet, but I was trying to find a non-Leafblower solution that would allow me to stay fairly mobile. Because I REALLY don't want to play a static gunline.

Figuring out that balance is going to be a running theme with me for a while. As far as Spag is concerned, I should be taking dual Manticores and 2-3 Hydras as a core. But while I'm coming around to a more Mike-like position on the Manticores post-NOVA, I still don't like using Hydras. They just don't work well for me, and I saw nothing at NOVA that convinced me otherwise.

Anyhow, let's talk about the games. 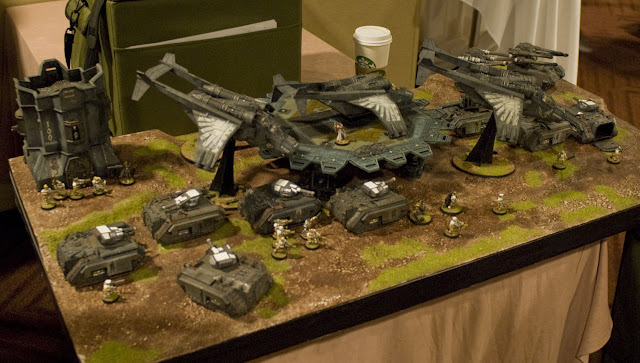 Vince (can't remember how to spell his last name) was originally supposed to play Spag in the Whiskey Challenge, but somehow Spag ended up playing Fearspect, while Fritz's last-minute cancellation left me wandering around without an opponent. Enter Vince, who offered to play me about an hour into into the challenge. Sure! I didn't know much about him, other than that he qualified for the invitational by winning an event somewhere, but I figured that fighting a Leafblower would be good practice. 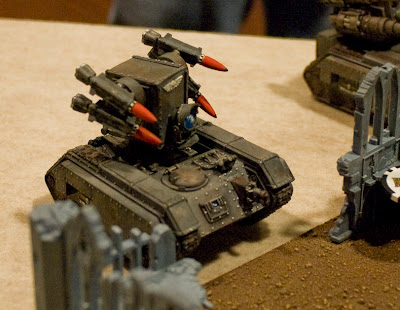 I'm really quite fond of Vince's Manticore conversions, BTW. They remind me of a Russian KV tank. This is definitely how I'll model up mine, since I have all of the parts needed.

Anyhow, we decided to use a standard NOVA objective grid and roll up the orders for the 3 win conditions. I think it went Kill Points, Table Quarters, Objectives with a Dawn of War deployment. Vince's list was basically a Leafblower variant with Al Rahem outflanking 3 Chimeras in support. 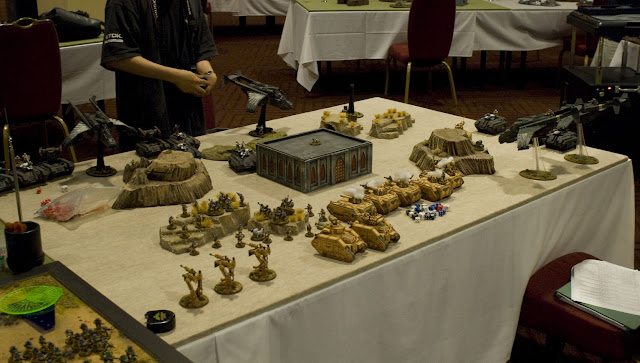 In retrospect, this was the first time that I started thinking that there might be something seriously wrong with my list. I won the game, but it went closer than I felt it should have based on my impression of how well Vince played. Like when I played JWolf at Adepticon, I felt like I had a better mid-game tactical grasp of the match. Maybe I just deployed poorly like in that earlier game? Yeah, I did make a mistake there. Hmmnnn... 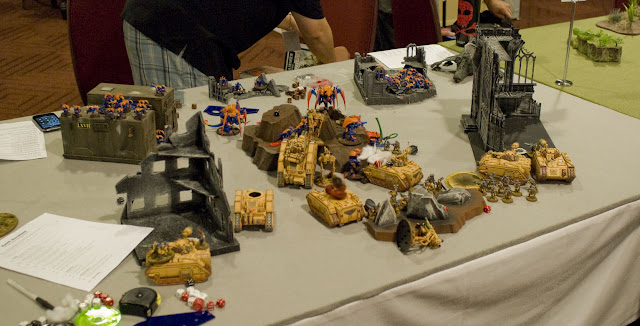 Pitched Battle with Objectives, Kill Points, Table Quarters. The spacing on the terrain was just fine. But the only place to put my infantry guns in cover was in the center of my DZ. Not the best place to put wounds on approaching nasties. So while my mobility was intact, my long range shooting was gimped.

Jamie rolled first turn and was smart about his deployment. The Genestealers came straight forward instead of outflanking, while he moved up his big blob of 2 Primes + Carnifexen onto the center hill where I had a hell of a time trying to push him off of it. We went just 4 turns due to weariness (we had both judged 15 hours at the Invitational the day before) and a tendency to talk and joke too much. :)

It went down to the third win condition, where Jamie won it by 25 points in one of my quarters. If I had just moved the Sentinels over a few inches on the last turn, we would have tied on quarters and gone to straight victory points where I would have had a roughly 200 point margin on him.

Ok, so it was a straight-up loss thanks to a stupid mistake by me at the end. Nothing unusual about that. It happened with JWolf at Adepticon. And yes Spag, Jamie did deduct the points for the damaged Carnifexen. It's right here on his sheet. I knew I didn't need to check him. :P

Tourney-wise, now I was in "oh crap!" mode, as I started wondering how I was going to push Terminators or other durable combat troops off of that hill in the rest of my games. Unless I got first turn, I wasn't going to beat them there. Hmmnnn...

Alex had a really nicely built Tau force. Where it differed from the Stelek-standard, he had good reasons for the changes he'd made, which I agreed with after discussing them with him. He also knew how to play it near-perfectly. It's safe to say that he's the best Tau player I've ever played. 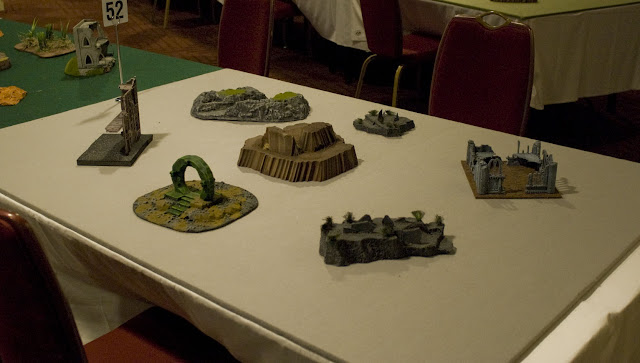 Our game was Quarters, Objectives, and Kill Points with a spearhead deployment. The mix of terrain was fine, but it was MUCH closer together than in this pre-Invitational pic. So much so that Alex and I flagged down a judge to ask if the layout was OK. "It's fine, play it!" he said. Um... OK.

Maybe all judges should carry around table pics on their phones? That way the original layout could be referenced. Regardless, we set up and played the game.

It was a tough fight between two shooting armies. Alex went first, but I stole the initiative (probably shouldn't have). He had the advantage of mobility, but couldn't get close to me too early. The best moment for me was when my Executioner killed 2 drones in a Las/Missile Crisis Suit unit and 3 Suits ran 17 inches right off the table!

Alex played it smart, but forgot about my reserved melta vets, and so he lost his Piranhas when they came on. At the start of my 4th turn things looked pretty good. All I needed to do was move up onto the hill with enough troops to hold it. But that's when it all fell apart. Because I didn't kill anything due to failing 2 terrain tests with my Chimeras and whiffing with everything else.

One terrain fail was a straight-up attempt to climb the hill. The other was failed when I tried to squeeze between the Stargate and the center hill. The problem was that both immobilized vehicles ended up touching at the inside corner such that neither unit could get out and go up the hill. They had to go the other way around the tank, which would take 2-3 turns depending on how they rolled for their difficult terrain tests.

Alex agreed that I lost the game on that turn when I failed those 2 tests due to the badly spaced terrain. He won it on table quarters.

With all those Tau swarming around his backfield, I was starting to wish for some more templates. But it *was* a bad matchup to draw Tau on a Spearhead deployment. If we'd been playing Pitched Battle, he wouldn't have had anywhere to run.