So I think I've recovered from most of my sleep deprivation. Another good night's sleep tonight and I think I'll be back to normal. Overall, I had a great time.

It's a long haul out to DC from Indy. Getting out of DC at night sucks without maps. If you're headed west via I-70, I recommend the south route through WV/MD. The north route Pennsylvania toll was mildly annoying, but the hills/mountains in MD were beautiful. There are some nice vistas as you roll through the cuts in the rock.

Venue:
I liked it. It's tough getting used to East coast prices on things when you're used to a cheap-as-chips midwestern budget. (like the $18.50 breakfast buffet in the hotel) I sort of knew it would be higher from when I used to travel doing Tech Service for I-Cyt out of Champaign, IL. It was convenient being housed in the tourney building.
I personally didn't mind that the area was "Dead" after hours. It was a bit refreshing to not go to overcrowded places after playing and standing all day. Sitting with a dozen or more gamers after a long day was fine with me. (Mmmm. Spicy BBQ wings. next time Mango Habanero.)
more food selections would have been nice. Having a Daily buffet at the hotel for gamers would have been nice as well.

The Hurricane (long rainstorm) barely impacted me. I got wet one or two times. I used to do field biology, I'm used to getting soaked to the bone. What we saw was a moderate rainstorm that lasted a good, long time.

I think the storm that hit the Indiana State Fair the week before was worse, but much shorter in duration.

Tables:
I had no problems with the tables at all. I think the lowest table I played on might have been 34 or so, on the first day. I was on tables 9-16 for the second day. I actually liked the "horribad" eldar themed table. The game I narrowly lost to Blood angels was on that table. (If I had known how close it was going to be on VP's, I'd have blown up his Storm Raven, rather than try to get through the smoke on that razorback)
The terrain took a tremendous amount of effort to pull together. A lot of it was made by MVB and Crew.

I read the Whiskey & 40K blog entries about them making terrain, and honestly wished I was there helping. Mrs. farmpunk has bugged me before about letting her make terrain, because she wants to do the arts 'n crafts stuff with me (more than just spongepainting mud on my tanks)

I did wish the terrain had 'fixed' spots on the felt. I dunno, maybe outlines in sharpie (or even washable marker). I think it might have helped define where it should have been. On the second day it was customary for us to measure to check where the objectives belonged at the start of the match. Just some ideas for next time, and for the Indy Open (yes, we're talking about it again. MVB inspired us.) 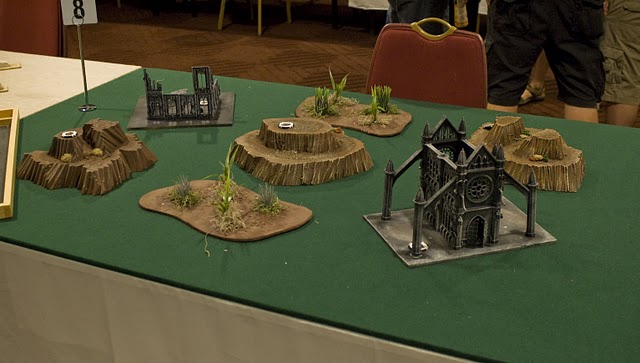 I judged at this table for the invitational, played at it for round 2 first day of the Open. looked the same as the pic. I didn't mind it. 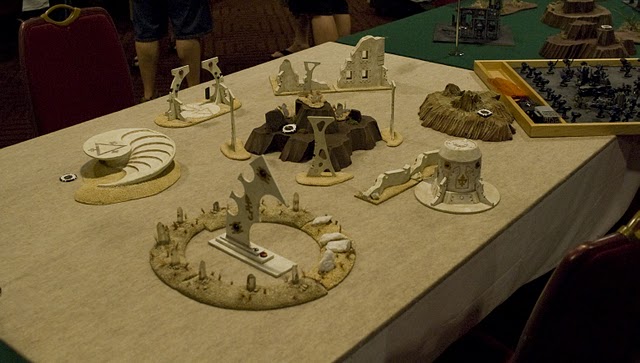 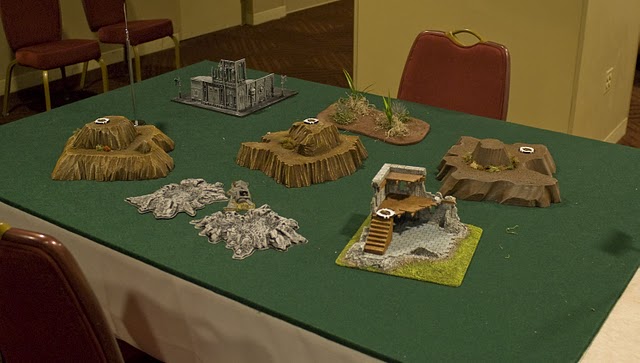 This is where I played a bit of keep away from Ghostin's 'Nids. This is also where the foot orks came to die in my last game. The terrain was pushed farther apart by the time of the last game on day 2. The chips on the mesas were on the inside of the bumps on top.

That was cool. really. It helped me get into the swing of rules without having to actually get stressed out about playing to the Nth degree. Contrary to rumors about him, I thought Dash was a gentleman while he played at my table. Actually, Everyone I encountered was respectful. Both while I was judging and playing.
which leads me to my next point:

Sportsmanship:
To all who attended, and those I played and/or judged.

I saw games and tables of Gentlemen.

Even my very first opponent was great, and took it like a man. (I brutalized his army.) I wish every tourney was this friendly. wow. I saw consistent high levels of respect between tough competitors. Well done, Sirs.

I enjoyed my time playing. Even though I was exhausted.

Blackmoor is a great opponent. My hats off to you, Sir. Probably my favorite game. I took a gamble, and was bested. It was a pleasure. (He had just beaten Stelek, only to turn around and face me. Meanwhile Dan, who I had beaten went to go face Stelek in round 3.)
I could have DQ'd both my 3rd and 4th opponents on day 2. BA's had a Libby in Power armor on a Termie armor base. It was supposed to be a  Libby in Termie armor.I said 'ok'. I also could have DQ'd the Ork guy for having a wrong list, like his round 3 opponent had done.
I came to play good games, not to win on DQ's. It just seemed against the ousia of NOVA.
Heck. I brought the wrong copies of my list, and Dan was very understanding with me as an opponent on the first day. I was very happy to see him win his bracket on day 2.

In conclusion:
I had a great time, Not just because I did well. (3-1 1st day, losing to Blackmoor) (3-1 losing by 52 pts to BA's)
It was great to get out and meet some of the personalities I know as internet handles and icons. There were a lot of you guys. There were a lot of people who would say "Which blog is theBack40K?", to which I would reply: "The Burnt Orange one." And then they knew.
Also: Chambers tells me he could hear my 'Girly Laugh' during the live broadcasts of the Invitational. I was standing one row behind the 11th Co. guys judging. Apparently you could hear my rules judging and see me in the background during live commentary. *shrugs* my voice carries.

I went to NOVA for great games. What I experienced:
Great Competition between Gentlemen.

I hope we can bring the spirit of the NOVA to more events.