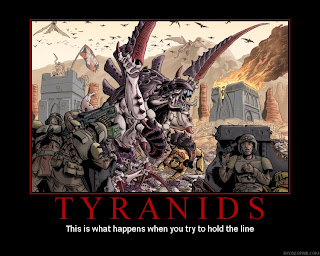 There is no less than a slew of blog posts and forum channels covering Tyranids in 6th edition.  Let's be honest, this is true of every army out there.  But Tyranids were my first army, and it's hard for the first thoughts of a new edition to be anything but bug-related.

So what's my first impression as a long-time bug enthusiast?  Thank you, GW.

I'm not about to stand up and say that Nids are the new black.  Per se.  But they're not that odd off-mustard color, either.  It seems that Xenos as a whole got a push in 6th, and at long last the bugs didn't get left behind.

To truly appreciate the new footing that the nids have found for themselves, we have to understand the slippery slope that they were on before.  There were two main issues with the codex that left the list as a whole lackluster.

First, 5th ed saw the rise of mech.  Tyranids have, since the dawn of time, been at odds with vehicles.  It's not so much that they couldn't take them down (try to tell a carnifex that it can't munch through a land raider with ease), it's that they rely primarily on combat with vehicles to do the heavy lifting, while what ranged support was available was largely suppression-based.

This in and of itself isn't "bad".  The idea is effective.  However a few different things kept it from really syncing.  Exploding vehicles would often wind up doing more damage to the Tyranid unit than the unit inside, thanks to an overall lack of armor.  Squads inside (sans a few casualties) would largely be unaffected, leaving the gribblies staring down the barrel of a bolter with no cover saves.  It often became a trade of squad-for-transport, which was an uphill struggle at best.

Add to this the ability for a tank to easily drive through your units to only be hit on 6's, and even the deadliest of beasties would be left scratching their heads as the armored boxes rolled by.

It was a mess.  We know it was a mess.  Had mech not been so utterly useful against everyone in general, it would have been a more manageable mess.  But it wasn't.

Second, Tyranids were that awkward mix of an assault-oriented army that didn't really do so hot assaulting things.  This boiled down to two factors.

Assaulting through cover without grenades is a pain.  It takes you from solidly winning a combat, to solidly (sometimes gloriously) losing a combat.
No Retreat wounds on models that have next to no armor is more than a pain.  It means assaulting a squad of marines in cover equates to losing 10 gaunts.  That's hardly what I call promising.

Sure, Tyranids have, since 3rd, sported a formidable amount of support fire, but they have always been at the heart a combat force.  It's why they have so many claws, you see.  For stabbing.

There were some other tidbits here and there, but these were the really crippling things that the army  had no answer to.

In answer to point the first - Mech.  The solution to this quandary is two-fold.  First of all, in order to effect the battle in any appreciable form (read - take objectives, or even contest), you must get out of your box.  Tyranids love things that are not in boxes.  They're tasty.  Of course, this only *must* happen on turns 5+, so you can still hide in said boxes for most of the game.  Leading us to the second fold.
Getting rid of those boxes is oh so much easier.  Vehicles (barring those with a WS) are hit on a 3+.  Yes, I'm assuming you moved your box half an inch.  This is a notable change from the 50/50 of yesteryear, and a huge boon from the 6 needed against a fast-moving target.

Sure, the odd powerfist or thunderhammer unit will enjoy this boon as well.  But for an army that has always had the mindset of "enough bitemarks make a hole", this is a huge, massive, ridiculously game changing difference.

Want some math to back it up?  20 Termagants (with adrenal glands, or a Tervigon nearby) charge a rhino-chassis.  40 attacks.  26 hits.  4 glances.  Oh snap, the tank is dead.  With no risk of explosion to hurt said squad of gaunts.  Same can be said for hormagaunts and gargoyles.  And about any other unit in the codex.

And that whole assaulting through cover/no retreat thing.  Well, No Retreat is a thing of the past.  At first I glanced up and said "Suck, still no grenades".  Then I thought about it.  You have to remember that gaunts don't necessarily have to win combat to win the assault.  For a long, long time Hormagaunts were great because they were fast.  Not because they were amazing in assault, but because they got their quickly.
This did a few things - it stopped shooting, both from the unit and from units behind (combat used to block LoS completely).  It would also wear down the unit.  Your marines may win combat every round by one or two, but I have enough bodies that I don't care.  I will win the assault by attrition, and in the end I will have typically lost the same or less points (and have half a unit left to play with).  It worked.

Except that gaunts are far cheaper, and often deadlier in assault.  I'll call that a win.

Sure, not having grenades can be a pain, but it only mattered so much because it ended up forcing massive No Retreat casualties, which could then further cripple monstrous creatures that were joined in that same assault, because they'd have to take those wounds too.

Now, Fearless is a good thing.  Fearless means I can shrug off losing the initial assault through cover, and even every individual round if I need to, because I'm not doubling the wounds I take.  I can tarpit.  I can maintain killing power.  I can wear you down until you're not there, and I still am.  I can assault you again.

These two things are enough to make me embrace the bugs.  But there are more.

Mainly in that a huge amount of options suddenly became viable, and even downright awesome.  What used to be worthless/overpriced has serious potential under the new rules.

Tyrants are a prime example.  I only ever took them because I think my conversions look cool.  Now that 40 point 2+ save ignores all but the heftiest power weapons.  Combined with how easy it is to get cover (and the first person who says "cover is so much worse" is getting smacked - it's more varied, but a 4+ and even 3+ is easy to find), and you have a serious beast on your hands.

Those 60 point wings make you a Flying MC.  In some ways worse than a mechanical flyer, although in some ways better - that's its own post.  In short, not a bad idea by any means.

Heavy Venom Cannons.  You want a S9 blast against vehicles?  Cool.  This guy is suddenly about 90% accurate vs armor.  No, you won't explode them.  But that doesn't matter, and was never what VC's were meant to do.  This change makes a Carnifex look attractive as a multi-tasking anti-tank unit.

Crushing Claws.  Previously iffy at the very best, due to cost.  Now?  Smash attacking cuts your *base* attacks in half, but any extras are still counted in full.  Challenge a Tervigon in combat, and watch 3-5 insta-death attacks head your way (sure hope you brought your inv save).  Need to pop a land raider?  I'll take those re-rolling armor pen, thanks.

The new psykic power options open up a lot of fun tricks as well.  Tyranids can easily fit a metric crack-ton of psykers into their lists.  While Telekinesis and Telepathy both offer some interesting options, I am dubbing Biomancy the official Tyranid Tree of Woe.

Iron Arm and Warp Time make a Tyrant/Tervigon silly in combat.  The Leech Life power falls into the same "buff the boss" category by giving them a form of regeneration.  Endurance is Catalyst on crack.  The "it will not die" aspect is great for Warriors led by a Prime, who can make use of wound allocation.  Enfeeble can make even basic gaunts look downright scary (and make powerfists quite the opposite).  Hemorrhage is the odd man out in this list, but it can reasonably do some damage, and even have a chance to snipe for you.  Add in a nearby friend with Enfeeble, and it can get downright dangerous.

Speaking of psykic powers, how about suddenly hitting top 3 (if not top 2) for psykic defense?  Eldar Runes take the #1 slot hands down.  Space Wolves will be dubbed #2 by many, due to the 24" range.  While Shadow is only 12", it's coming from all sides, not just one character.  Further, Shadows is a 50/50 fail rate on Ld 10, but gets better once the Ld of the psyker drops (rare, but it's out there).  Even further, it offers a higher Perils rate, which is likewise more dangerous.

I have not been this excited about the bugs in a long time.  It's a good feeling.
posted by Anonymous Foodie at 9:54 PM