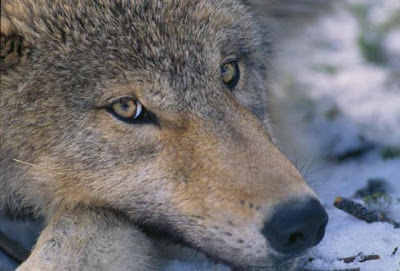 As regular readers of the blog know, I've been flummoxed on how to beat Spag's Space Wolves with my Guard. While his Thunderwolves aren't that big a deal for my Blood Angels (or even Tyranids) to kill, they're a real hell for my IG to deal with. Toughness 5, stormshields, unique equipment, and huge cover-touching bases make them VERY resilient to ranged fire. Like Nob Bikers on steroids. While their cavalry status gives them the ability to hop out of cover in the movement phase, run, and then assault up to 12" in a wide arc that can easily hit 2-3 tanks at once.

In addition, Spag's list has built in solutions for killing any annoying S10 Demolisher/Artillery that one might bring. He has a single drop pod full of meltas that is quite good at taking these units out on turn one. As well as a unit of Wolf Scouts that can enter from my board edge and melta any tank that hangs out too long in my deployment zone. On top of it all, are his Long Fangs that pop my tanks unmolested, and the Grey Hunters that usually have nothing to do but leisurely amble on up to the objectives on turn 4.

Taken in total, his list encourages me to castle up and protect myself from a a throwaway unit that does reliable damage, and then spend half or more of the game trying to kill 4-5 Thunderwolf Cav instead of his Long Fangs and Grey Hunters. While the scouts come in late-game and either kill a Russ or contest an objective in my deployment zone at a key moment.

"But..." I hear you saying, "You're IG! Just take Platoons,  Hydras, Griffons, and Manticores! Shoot him to death!"

Um, no. Regardless how well that might or might not work, doing so would turn my army into a static or semi-static gunline. I HATE playing that way, even a little bit. No, my style is to get up into your face and kill you at 0-12". It's not how most people play guard, but it works wonderfully against everyone but Space Wolves, and to a lesser extent, the new Grey Knights. Mobility, mobility, mobility!

So since my tactics have failed to turn the tide, I've made some modifications to my usual list(s).

If I'm always going to lose one Demolisher, I'll bring a second and a plasma Russ too for good measure. Plus some plasmas in the 2nd blocking squad. If I can't safely stay in my deployment zone, I'll just move everything up into the middle of the table instead. As Farmpunk has told me, this list should make most Marine players wet themselves. 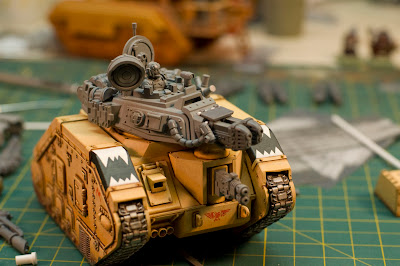 The problem is, I don't want to tailor a list for one opponent/metagame. So what do you guys think? Is it too imbalanced to be called an all-comers list? I'm worried about a lack of long range cover-denial against Orks/Nids and not having any long-range (>36") anti-troop. But on the other hand, if I'm controlling the middle of the table, or my enemy has to come to me, is it even a concern?
posted by SandWyrm at 2:21 PM