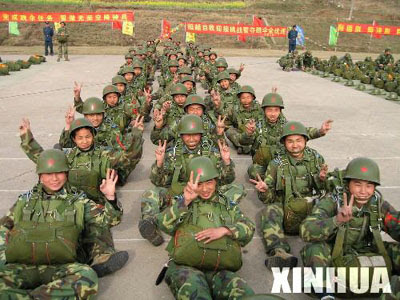 Most of the 40K blogging elite at Adepticon were busy on Saturday with the Team Tourney. But I managed to get a pick-up game in with Dethtron of Dick Move (part of the Ego of Tasty network). He'd brought along his Elysian Drop Troops. Which were aptly named, as he dropped a box of them on the way to the open gaming hall. Knocking quite a few bits off of one of his Vendettas. Fortunately I brought along some superglue. :)

As I mentioned in my earlier post of my game with Chambers (which happened after this one),  we had a heck of a time finding a place to play that actually had terrain we could use. After much searching, we settled on the LoTR/Epic 40K room, where there was an extra 4x4 table on hand. 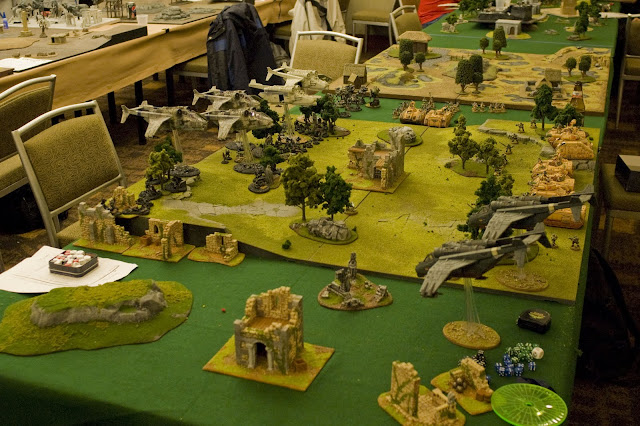 Determined to try and play a 6x4 battlefield regardless, we scooted the board over a bit and tried to disguise the edge with terrain. But then we pretty much just played on the 4x4 anyhow.

There's too much terrain on the table really, but I wanted to give Dethron some advantage, as he doesn't get to play that often. So the extra stuff would slow down my tanks and make things more interesting. Besides, the terrain was very well done and easy on the eye.

Here's my IG list, which was the same one I took to the Adepticon championships on Friday.

Dethtron was running his IG using the Elysian rules from Imperial Armor 8. Which I'm not intimately familiar with. but it was something like the following:

The Drop Sentinels are nice. Heck, having them in Elites is a godsend. If only the regular IG codex was smart enough to do that. There's nothing "Fast" about a Sentinel at all. The only reason they're still in that overcrowded FOC slot is dumb tradition. Now if only Rough Riders were troops...

I'm not crazy about the Elysian infantry options though. No lascannons or autocannons are allowed in the army anywhere, so that leaves missile launchers, which are not the best at popping armor. You also can't take more than one special weapon in your Platoon Command Squads.

Setup
We roll up Sieze Ground with 3 objectives. Deployment is Pitched Battle. 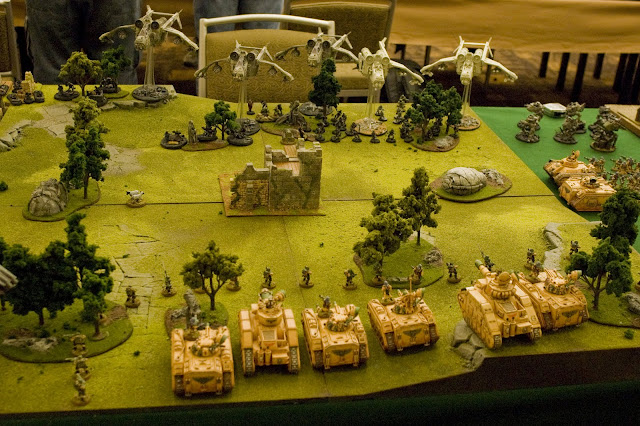 The moonshine-barrel objective is over on his line next to the blob in the top-center of this pic (PARTY!). The sheep objective is near the middle of the table, and the 2nd Edition IG assault cannon (sniff...) objective is to the left of the trees at the bottom-left of the pic above. 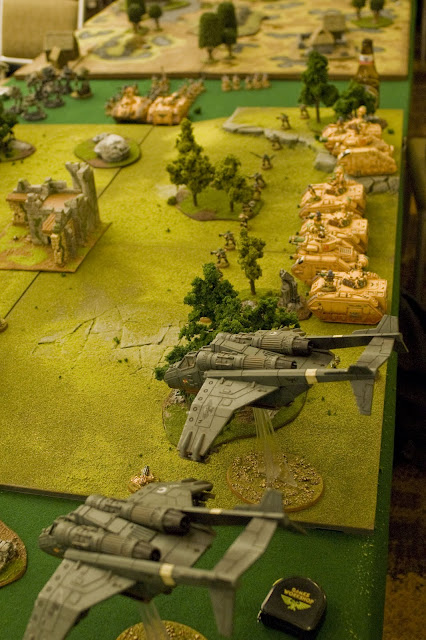 I won first turn and set up my army. With the Demolisher closer to the center, the Vanilla Russ up on the hill, and a ring of Carapace Vets all around to keep deep striking meltas further than 6" from my tanks (not that he had any, it turned out). The Vendetta are both over on my far left. While the Primaris + Plasma unit and the Hellhound are in reserve. 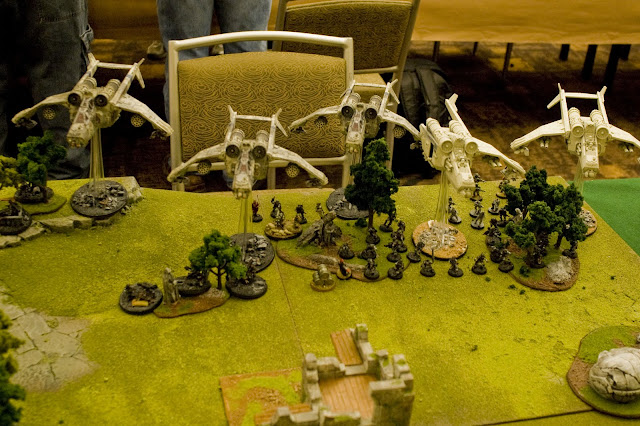 Dethron then put down 3 Valkyries and 2 Vendettas. With a blob underneath them to the right, the CCS just to the left, and two missile squads in the trees to the near and far left. The snipers took up position in the far left corner, while the multi-melta drop Sentinels went into reserve to deep-strike onto the table. 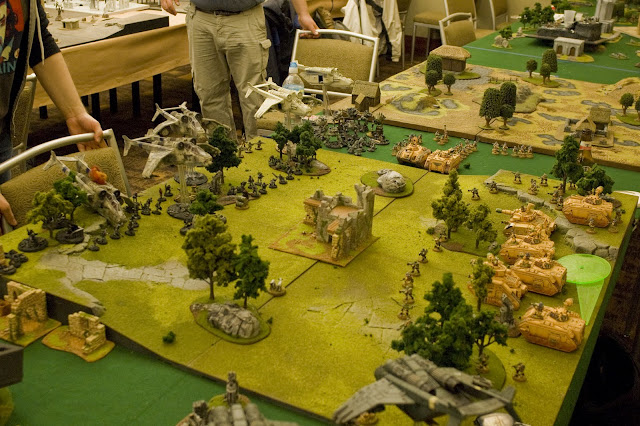 I shuffle around a bit and move everything forward a bit.  I figure that if a mutli-melta Sentinel squad wants to drop in behind me, I'll let them risk a mishap. My right-most Chimera full of melta vets immobilizes itself, forcing them to disembark to move forward. 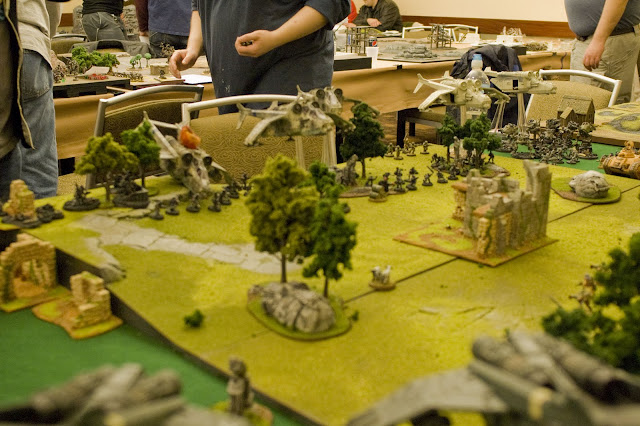 My Vendettas pop one of his Valks on the left and blow up a Vendetta on the right. Killing 11 or 13 guys in the blob squad and CCS beneath it.  I whittle down a few other squads. 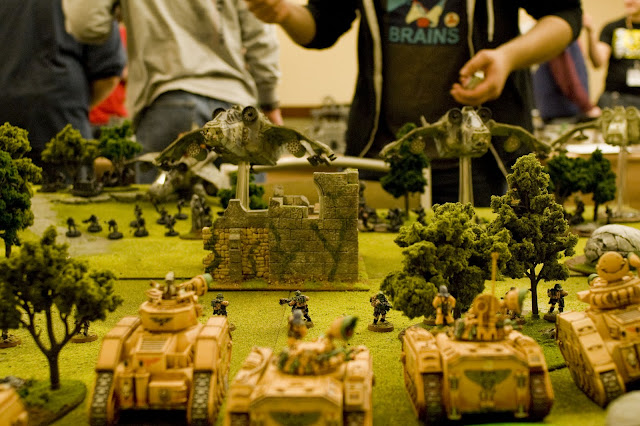 Dethtron move his birds up, and I start taking fire from the missile squads in the trees. 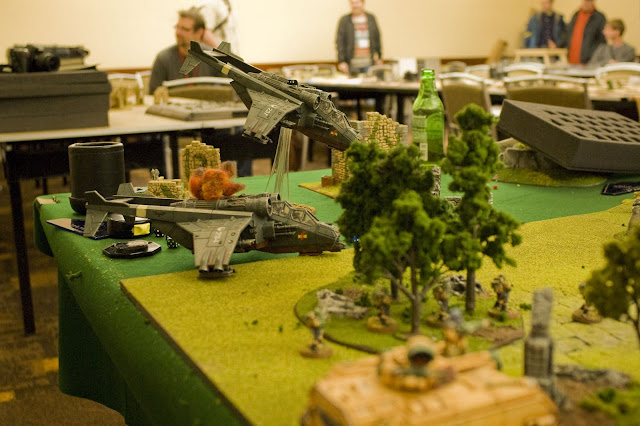 Down goes a Vendetta. The other is shaken.

Dethtron's Vendetta over on the right manages to immobilize my Vanilla Russ! 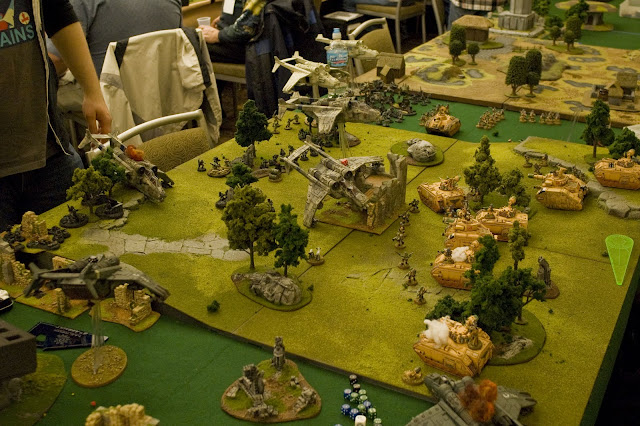 The Primaris's Plasma Vet unit come on and secures the assault cannon objective.

My Vendetta zooms forward to get a cover save.

I move up the tanks some more (Damn the Sentinels! Full speed ahead!). The Valk that moved up to the center gets immobilized by long range meltas and I chew up more enemy infantry with my cannons. 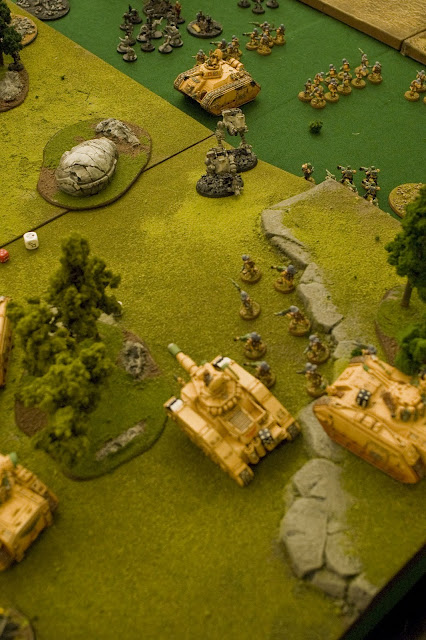 Over on my right, the first Sentinel squadron comes down. The scatter was pretty wide. He's less than half an inch from the table edge with the primary model. 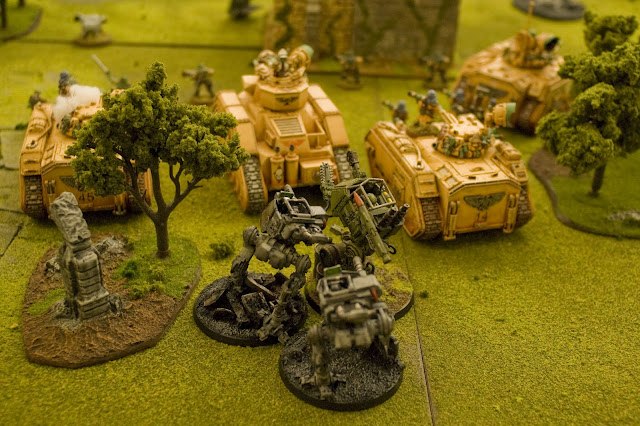 The other Sentinel squadron (the largest) comes down right behind my Demolisher. They stun it with their multi-meltas. 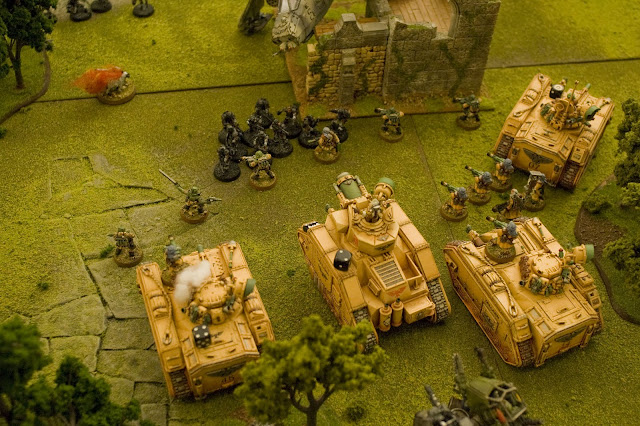 The squad that was in the immobilized Valk gets out and assaults my blocking infantry. 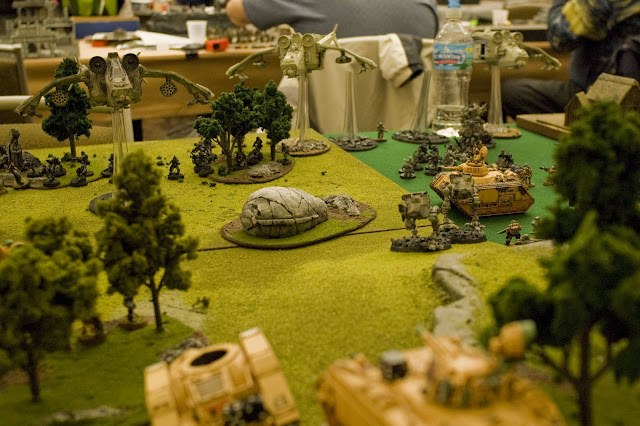 The Sentinel squadron over on the right takes the turret off of my Vanilla Russ. The Valks keep pounding away at my infantry, killing the Vet squad on the right that was walking. 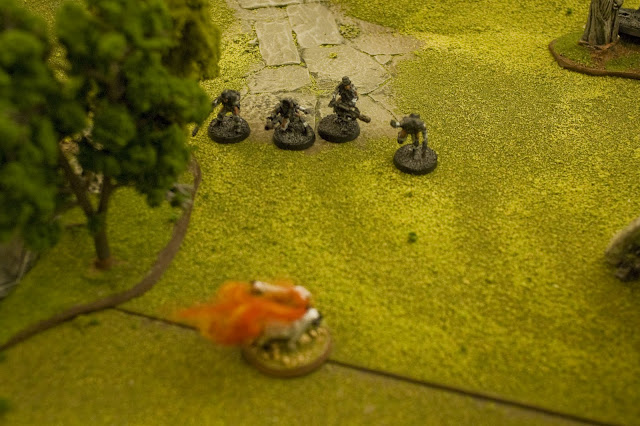 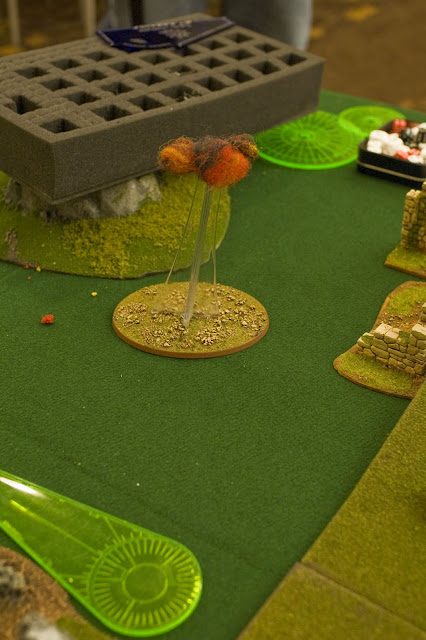 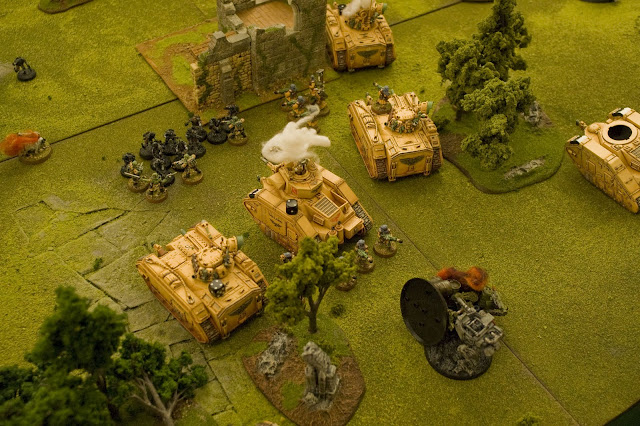 The Vet squad in this immobilized Chimera gets out to shoot its meltas at the Sentinels nearby. They explode one and wreck another. Losing four or five guys to the explosion.

My Primaris finishes the last Sentinel off with some lightning. 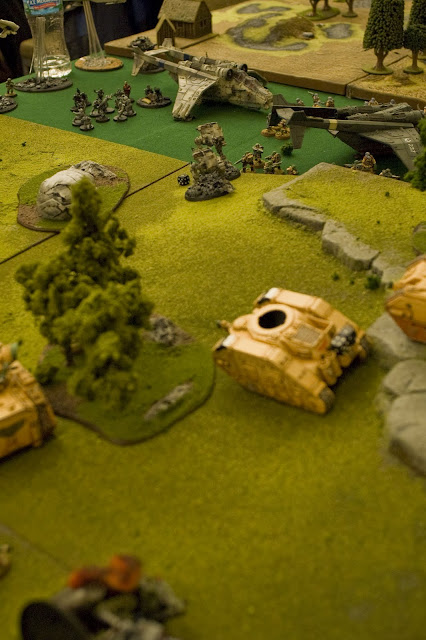 There's not much left on this side to kill those annoying Sentinels with. I shake one with a Chimera multi-laser. 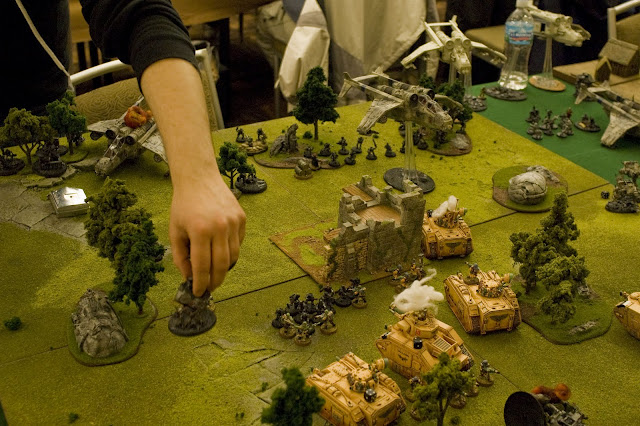 These drop-guys are giving me a harder fight than I anticipated. We each have our home objective pretty well secured. While the sheep in the center are up for grabs.

Down comes the last Sentinel squadron to try and contest the center objective. They blow up the immobilized Chimera. I guess to try and get some wounds on the Vet squad nearby.

I finally lose the combat in the center. Dethtron's guys spread out a bit afterward.

Turn 4
In comes the Hellhound to the party.  It erases that small unit of Dethtron's that was sneaking up on the objective.

The Demolisher mauls the center squad that won the combat and they run. My squad gets out of it's Chimera to the right of the Demolisher and hoofs it for the objective. While Dethtron's Sentinels move toward me and wreck that Chimera.

Dethtron makes his move and scoots a Valkyrie 20 inches right on top of the objective. There's a bare-bones PCS squad inside, so it's scoring. 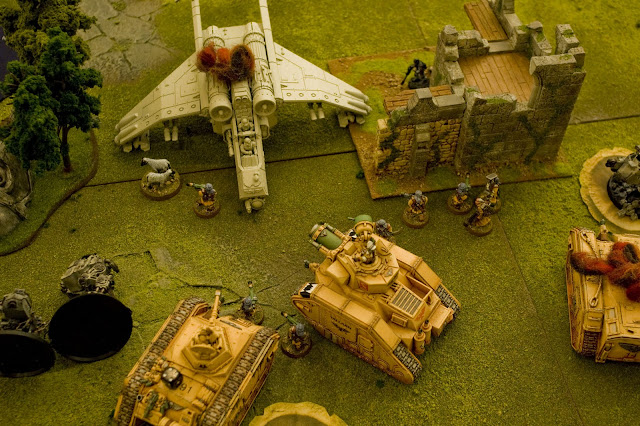 I melta the Valk and wreck it. Which means that the guys inside are dead too. Since you can't disembark from a transport that's moving flat out. 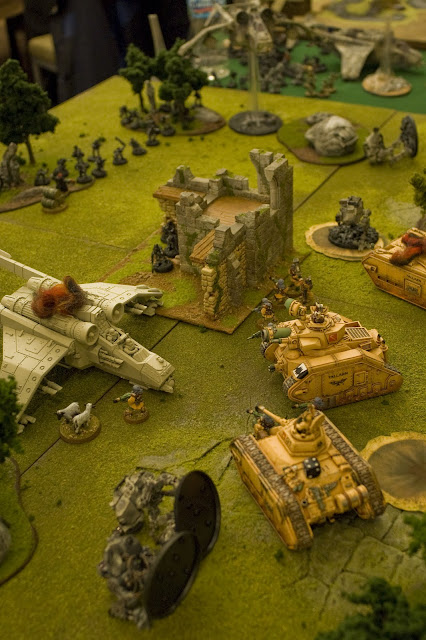 Instead, Dethtron does his best to kill my squad that's now claiming the sheep objective with shooting. But he comes up a couple of models short. I remove all my models from the center, leaving a melta gunner by the sheep and the Sergeant on the other end with nobody in-between. They fail their moral check, but pass the re-roll from the Regimental standard. Whew!

Conclusion
It was a fun, relaxed game and we had a lot of the Epic guys coming over to check out the action as the battle went along. I don't know how much money was on the table in models, scenery, and the battle board itself. But it was a lot. 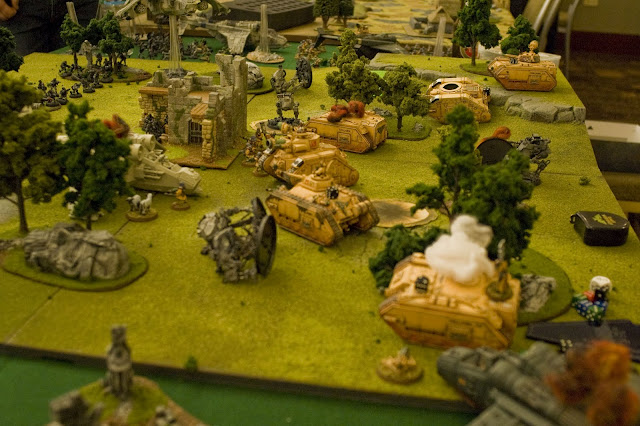 I like the Elysians quite a bit. They give up a lot of options to be able to take more Valks and those awesome multi-melta drop Sentinels. I think that if Dethtron had more practice with them, he could have really rolled me up by dropping them all on one flank and walking them in just out of my own melta range. With the Valks mopping up my troops as they were popped out of their transports. Mean stuff!

Dethtron was, of course, a hoot. So were the guys from his band that hung around to watch. I also have to give Chambers a lot of credit for hanging around and fetching my beer for me when he could have been off doing other things. Thanks man!