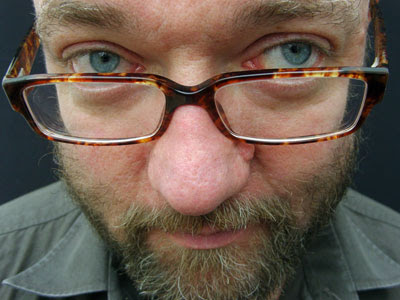 My favorite event at Adepticon, believe it or not, actually turned out to be the Black Library roundtable discussion on Sunday. Dan Abnett was there, along with Nathan Long of Felix and Gotrek fame. As there were only twelve or so of us, we got to have a very interesting and personal discussion about their work. Abnett, in particular, was a riot. While Nathan had some very ah... interesting stories to tell from his days as a B-Movie writer in Hollywood.

While most of the questions centered on the business of writing novels and how the Black Library operates in relation to GW-proper, there were some interesting tidbits for non-writers; from Abnett's take on the criticisms of the Ultramarines movie, to book projects that are currently in progress.

Since Abnett's going to be the main draw, I'll get Nathan's bit out of the way first. When asked if the Felix and Gotrek series would ever end, he stated that there are currently 4 more books in production and at least 2 more in the concept stage. So any finale to the series would happen no sooner than 7 books out. He also said (with a wry smile) that there is a very convenient 20 year gap in the storyline. So while the story might someday have a firm conclusion, that doesn't mean that you wouldn't see more F&G books afterwards to fill in those gaps.

On To Abnett...
He was quite puzzled that the fans were so angry about GW's first movie being centered on the Ultramarines, as opposed to Blood Angels or Space Wolves. From his (and I assume GW's) perspective, this was a movie for non-fans too. A beginner's introduction, if you will, to the universe of 40K. Ultramarines, as a chapter, required no further explanation in the story, as they are the epitome of what a Space Marine is. To do a Blood Angels or Space Wolf movie, you'd have to go one step further and explain the different types of Marine. Which would only muddle things up story-wise.

As a writer, he had a goal he was given within certain limitations, and so he feels like he delivered what was needed. Those of us that wanted something grander... well, maybe next time. Abnett has a background in comics, so I think his sensibilities there are showing through. Keep it simple to start with and build on what works. Nothing too fancy.

But if the goal was only to introduce 40K Marines to non-fans in a low-key way, then why the super-duper collectors box treatment and all the other hoopla? I think it speaks to conflicting agendas within the GW management chain and a lack of a consistent vision for it's projects.

But Back To Abnett...
The story itself, he said, was a reflection of the budget pressures they were under. He also intimated in a non-technical way that being new to computer graphics, he didn't understand at the time what would be easy or hard to accomplish on-screen.

Which makes sense to me given my own CGI background. It's easier in Computer Graphics to have 100 copies or alterations of one model than it is to have to sculpt another full character. You want Chaos cultists? Well then you don't get a Servitor. 10,000 Orks is only a little bit harder than 10 Orks. You get the picture. The Marines in "Ultramarines" all look the same because they all use the same base model with head and minor detail swaps. They're fighting Chaos Marines because that only required them to modify the existing Marine models instead of sculpting new ones.

Nathan Long, BTW, pointed out indirectly through his Hollywood stories just how difficult it is to get a good script through a bad production chain. If the other people working on the film don't understand storytelling, then they will constantly make decisions that destroy the narrative continuity of the script. Examples might include a director shooting a favorite scene from a prior draft and then inserting it between scenes from a newer draft; narrative structure be damned. Or when you write funny lines for a wholesome looking girl only to find that the director cast a blonde bimbo for that part instead. Suddenly the joke he wrote makes no sense in the new context, but nobody else noticed. Who do you then blame for that?

Hearing that perspective really makes me appreciate the ability of directors like James Cameron to surround themselves with good people. Without everyone on the team doing top-notch work, a movie project can easily fall apart even if the script is (in theory) of AAA quality. Which is not to excuse Abnett for the boring Ultramarine script. But I suppose that we should also appreciate how hard it was for GW to make this project at all.

About That Crozius...
Abnett's gotten a lot of flak over the depiction of an Ultramarine Chaplain killing Chaos Marines with
magic beams from his Crozius Arcanum. He defended this scene in a couple of ways.

First, he pointed out that GW's management had full control over the film. They were involved in every aspect of the production, including the script drafts. So if anyone in Nottingham ever had the slightest objection to that scene, it wouldn't have made it into the film.

His second defense was more interesting, in that it illustrated GW's internal thought processes. The 40K universe, according to Abnett, exists as it's own entity; of which the books, films, and games are all interpretations. So in the movie's interpretation, the Crozius operates in one way, which best serves that medium. While in the games the functioning of a particular piece of equipment is much more rigidly formalized.

I'm not sure that I buy that argument, in light of his earlier comments that the movie was intended to serve as an introduction to the 40K universe and (presumably) the 40K game that GW would like to sell miniatures for. But it was an interesting reply nonetheless.

So What's Next For Abnett?
He's 3/4ths of the way through a new Gaunt's Ghosts 4-book series. He let slip that in one of the books Gaunt and his troopers would be performing boarding actions in space. "Just don't call them Marines." he says. :)

After that he's going back to the Eisenhorn/Ravenor saga, with a series of books centered around Alizabeth Bequin. Bequin was part of both Inquisitors' retinues at one time or another. Now she's getting her own series that Abnett says will finally see Eisenhorn and Ravenor face off against each other. Nice!
posted by SandWyrm at 4:00 PM