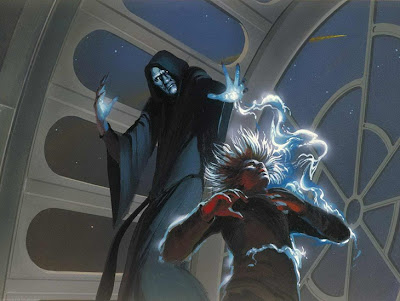 Here's the rundown on my 4 games at the Adepticon 40K Championships.

Why the Primaris Psyker?

Well, each mission at Adepticon had 3 simultaneous objectives that you had to play for. With the winner being the player who accomplished the most (with a VP tiebreaker). The mission packet for the tournament included an objective where you had to get an HQ unit within 6" of the center of the table.

In testing a primer mission with that objective, my CCS had lost it's ride and come up a few inches short. So since this objective could show up (according to the packet) in any mission, I decided to take a 2nd HQ to make sure I could perform when needed. Especially if one of the other 2 objectives ended up being Kill Points, which I'm always weak in. So I took the Primaris and stuck him in the Plasma Vet Chimera to protect the backfield; where I figured a little extra firepower couldn't hurt.

Had I been able to test him out before the event, I would have swapped the squad's plasma guns for Grenade Launchers. That would have meshed better with the Primaris's shooting and given me enough extra points for a Fleet Officer.

Game One: Mech Chaos
My first game was against a guy named Drew, who I'll call "DreamEvil", because that's what was on the 40K Radio tag he was wearing. I assume that means he's a Freeboota. 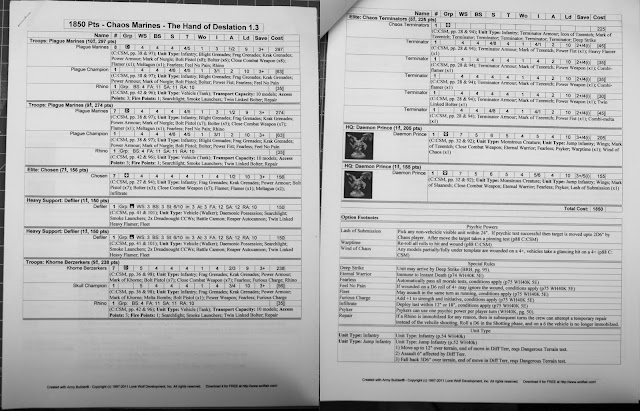 A fairly standard CSM build with a few tweaks here and there.

The Game
We set up. I think DreamEvil went first. The Chosen outflanked, while the Termies went into reserve.


The HQ-Objective is that pedestal-statue next to the center building. 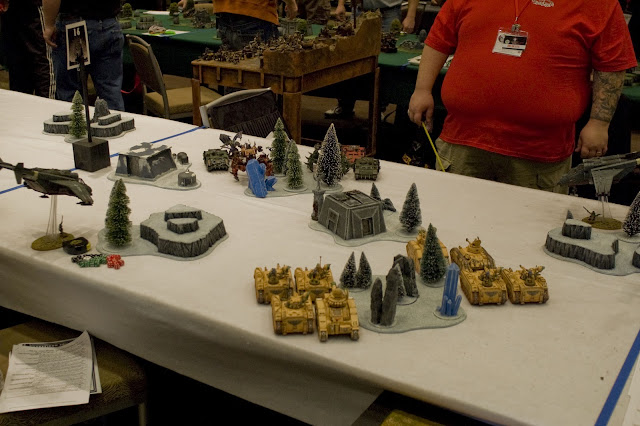 The Vendettas scout out to the wings with the Demo-Vets aboard.

On turn one, DreamEvil moves his Rhinos forward, but immobilizes one (Plague Marines) on the terrain. Of the other two, one scoots up to the center, while the other moves over to my right.

I move the Hellhound over to the right to interfere with his movement, while the Vendettas take out one Defiler and immobilize the other.

To the right of the center building, I pop the Berzerker Rhino with multilasers while the Hellhound kills a couple of the guys that were inside. I shake the Rhino in the center.

On turn 2, DreamEvil's Terminators come on, but he gets too aggressive with the deep strike and they scatter onto my Demolisher. He rolls a 2 for the mishap and they're lost.

One of the Daemon Princes flies over to my left, but eats Demo-Vets instead of the Vendetta he was after. By the time he's done with them, he's down to one wound.

The immobilized Defiler takes out my Vendetta on the right, while the Berzerkers come out to play with my Demo Vets. The Berzerkers get the worst of it and die.

The Primaris starts throwing lightning at the Rhino behind the center building. Stunned and immobilized with no weapons. Not bad. 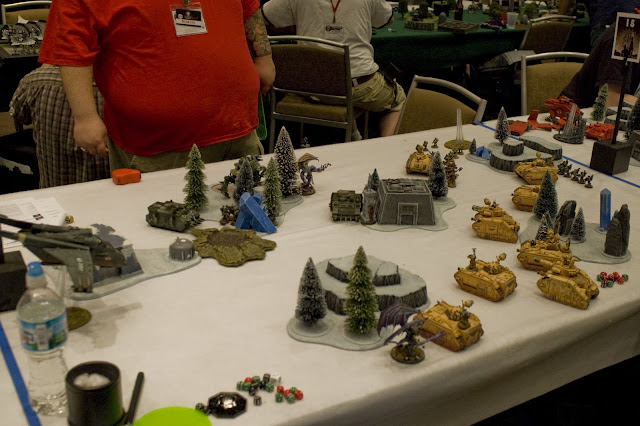 Turn 3, the Daemon Prince on my left with one wound left decides to Kamikaze into a Melta Vet Chimera, but whiffs both his ranged shot and his close combat attacks. He takes melta to face on my turn and dies.

The Chosen come on and kill a Melta Vet Chimera on my right. But then succumb to a bad case of Demolisher. One of them lasts another turn, but then dies to Vet Meltas.

The Plague Marines in the immobilized Rhino sit tight for a turn, but when the machine spirit fails to repair their ride, they get out and hoof it.

DreamEvil is holding back at this point, and the reason suddenly hits me... He's afraid of the Primaris! I'm starting to like the little guy. ;)

The game ends on the 5th turn with a tie on kill points and every table quarter contested. My CCS Chimera was immobilized early on, and they couldn't quite get to the center, even with a run order. But... the Primaris' Chimera was still good, so he zoomed up to the center, and did exactly what I brought him along to do.

What I couldn't figure out though, is why DreamEvil's last remaining Daemon Prince was still off chasing the Hellhound around his backfield instead of flying to the center of the table to tie me on this last objective. I soon find out though, because as we're tallying everything up, DreamEvil thinks that he's won. Huh?


Conclusion
He misread the HQ mission objective. He thinks that his troops in the center are claiming the objective and I'm too far away to contest it. Uh, no. I only have to be within 6" with an HQ and contesting troops don't matter. Explaining his mistake takes a lot of careful talk and a confirming conversation with a judge. Afterwards we also tally up our Victory points, where I have a large margin on him.

I wasn't sure how to feel about the missions at that point. DreamEvil wasn't alone in misunderstanding some of the objectives that day. While I was happy to have that advantage on him, and it was competitive in it's own way, I'd really rather that the competition be played out on the table instead of in external things like comprehending unusual rules.