Grey Knight Analysis! What you need to know to win, GUARANTEED at 1500 pts!! 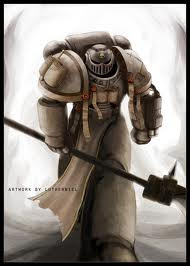 To first get some validation and credibility to you the reader.  I am a very competitive player that has had very good success with Space Wolves, Daemonhunters, Space Marines, Tyranids-last edition, and Guard.

DISCLAIMER: My play style is assault oriented.  I prefer and like to devise strategies to get in your face and beat you in assault.  So for all the people that prefer gun lines and shooting, this analysis may not be for you. They shoot well, but that is not the staple of the grey knights.  Read the fluff! There is a reason they all have power weapons. Shooting is secondary to close combat for grey knights.

Best units of the game by FOC:

HQ:
#1 Librarian-190 pts. (MVP OF THE CODEX). Due to the psychic abilities to boost your army, the librarian is the best model in the actual codex.  I play my librarian with the following psychic powers:
Shrouding- Stealth or +1 Cover saves for everyone within 6"
Summoning-I combine this with a teleport homer. Moving units around is a superb technique
Warp Rift-The main reason for this power is the auto-pen vehicle. A Jaws template is great also.
Might of Titan-Makes units +1 Str and monstrous creatures for punching vehicles.
Sanctuary-Anti horde and anti assault psychic power

#2 Xenos Inquisitor-65 points.  For assault armies this is a cheaper version of a grandmaster that is better due to the stubborn rule he bestows on the unit he is with. I run him with Psychotroke and Rad grenades, a bolt pistol, power weapon.  He is easy to hide with terminators so he never gets into assault with nasty stuff , and his 5 attacks on the charge that benefit from the Rad grenades means he often wounds on a 3+ with hammer hand and his power weapon.  Nice for a 65 point model. Also he can be run at 73 with power armor if you have the points.

Terminators-450 pts. These are the best troops when compared to the Strike squads.  Taking 1 10 man terminator squad and combat squadding them is the best option.  It is hard to beat their 3 attacks on the charge and so many 2+ saves. psycannons are a must on at least 1, but I prefer 2, splitting off both psycannons into one combat squad making it a more shooty squad while the CC squad is mostly halberds. With Halberds, hammers, and swords for free the best build I have found is: 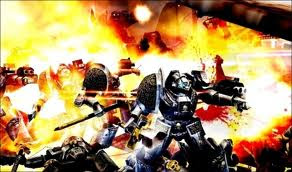 Strike squad-105 pts. I only take 1 small to fit my second troop choice.  They are a good anti deep strike element, but poor in relation to assaults.  I added 1 halberd and a free psilencer.

Fast Attack:
Storm Raven-205 pts. For any assault based army you have to have a mode of transportation. YOU HAVE TO GET THEIR TO SMASH FACE. I know this is 205 points of "crap it might get blown up". But moving 24" towards the enemy means you will either be assaulting next turn instead of walking across the board and getting shot to pieces.  Combined with the shrouding psychic power you can gain a 3+ cover save. In addition, fortitude makes it harder to stop and the ceramite plating helps tremendously.

Heavy:
Dreadnought-115 pts. The base dreadnought with Muti-melta and Doom fist is best for a close combat army.  The mmelta gives the melta punch you don't have anywhere else. I tried the assault cannon with psybolts, and the 15 points I saved was better used other places.

Elite:
#1 Purifiers-275 pts. 10 purifiers with 2 free incinerators, 2 psycannons, and 6 halberds.  This unit it probably the 2nd best infantry unit in the game.  splitting them into combat squads with 2 incinerators and 2 psycannons is great, or keeping them together to ride in the Storm Raven or Chimera is another great tactic. I split them and summon them where I need them most. Especially the incinerator group when playing guard or tyranids. :)  They are fearless and with 5 halberds and a hammer have a great punch. Cleansing flame does wonders against everyone, especially against horde armies.

#2 Psykers-95 pts.  These 4 psykers with a Chimera have won me a few games.  A str 6 ap 3 large blast from 36" away for only 40 pts!  The Chimera is used to transport terminators or other grey knights. Since I prefer close combat they often get loaded with the shooty terminators and move 12" popping smoke to get close to the Raven to benefit from the shrouding cover save.  There are other henchmen that can work well with an assault based army.  I will be trying crusaders eventually.

This is the 1500 point list I played with in a tournament this past weekend.  I believe these are the best units in the codex.

When play testing through these 13 games, I have used the following units and found them just not meeting the criteria I look for in my armies:

Grandmaster-Too expensive at 1500-The Grand Strategy is ok, but not a game changer.
Psyfelman dread-Strength 8 shots are great, but for at 135 pts of a 1500 pt list, more scoring units are needed.
Castellan Crowe-Yes purifiers are troops, but he is never better than the libby, and 65 or 73 points for the Inquisitor has proven better and more efficient.  The Grenades are better than Crowe. Plus Crowe is stuck alone......
Paladins-I have tried them twice and they do ok..but if you don't have a grandmaster to make them scoring, at 1500 they are too much of a point sink.  They can be more viable at higher point games.
Other choices-I don't even find many other choices viable.  The brotherhood champion seems ok, but I would rather have an Inquisitor.  The Dreadnight is just a big terminator.  Landraiders aren't viable until 1750 or 2000 due to the cost of units. Assassins...blah!

THE PROBLEMS:
*I have only 41 infantry models in this list.  Before I added the purifiers I only had 30.  I removed the psyfelman dread and changed around some points.
*I only have 2 transport vehicles.  If my transports get blasted turn 1 or 2 I could be screwed.
*I only have 2 or 3 troop choices.
* I don't have much anti-tank.
* I am too psychic dependant.

To address these issues read below:
*I have only 41 infantry models in this list. Before I added the purifiers I only had 30. I removed the psyfelman dread and changed around some points.   41 is not that bad in a 1500 point list.  30 is horrible.  Grey Knights die just as fast as regular marines. This small model count ensures you have to be tactically correct in almost every move you make when considering movement and strategy. 2 mistakes can cost you the game.  Hugging cover is a necessary with a low model count.

*I only have 2 transport vehicles. If my transports get blasted turn 1 or 2 I could be screwed. (This is the reason I added Summoning and a teleport homer to the Libby.  If you don't have 1st turn, try and put or deploy the Raven at a back corner or behind cover to benefit from a 3+ cover save with shrouding. If you go first, your fist action should be to move flat out, shoot the multi melta or assault cannon at something.  On turn 2, you can summon a foot slogging terminator squad, a purifier squad, strike squad etc. to withing 6" of the librarian, who just happens to be in a gigantic flying tank.  (Great for flaming tyranids, guard, scouts, etc.) You can in subsequent turns summon units that have gotten whittled down to keep them safe where you are..  With 2 storm ravens, one can get a cover save from the other one.(Which is where I will probably go with 1750)

*I only have 2 or 3 troop choices. This is a problem with seize ground only if there are more than 3 objectives.  Other models can easily contest anything, but with only having a 3 5 man squads to hold objectives being cautious as noted in low model count is vital.  So far, this hasn't been an issue in the 13 games.

* I don't have much anti-tank. With only 2 meltas, tanks could be an issue, but I have found that the psycannon does a great job at stunning vehicles.  This works similar to missiles from long fangs. You might not wreck or destroy them, but stunning them is just as good so you can get to them and move around the board with less shots, or even better to cause your opponent to get out of their transport vehicles.  Having the Libby around to cast Might of Titan is even more important in cracking armor which adds to his value as the MVP of the codex.

* I am too psychic dependant. This is unfortunately a fact.  Eldar runes of warding cause major issues against Grey Knights. I predict an influx of Eldar armies and Librarians hitting the tables. You can also expect more bloodthirsters with a blessing against force weapons from Chaos Daemon players.  This army is still good without psychic powers, but becomes very powerful with the inclusion of them. 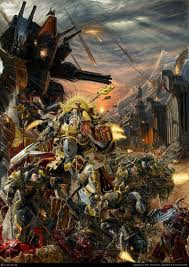 In conclusion, an assault based force such as the list above has:

This type of list played aggressively and carefully will beat most Space Marine Armies because of the power weapons, psychic powers, psycannons, and storm bolters. It will have difficulty against guard and eldar.

If you don't know what each wargear option does, please read the codex. Discussing that information will make this longer than it already is.

What are your thoughts?
posted by Spaguatyrine at 3:34 PM