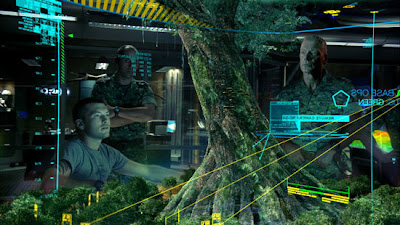 Here's my analysis of the terrain in the 40K Championship/Team Tourney hall at Adepticon.

I have to admit, I wasn't expecting much of the tables going into Adepticon. Most events I attend have trouble scraping together enough quality terrain for 15 tables, let alone 128. So I was pleasantly surprised to find that the terrain was plentiful, as you can see in these pics.

About 5 in 6 of the tables followed a standard layout of 6 pieces, arranged in an X with another central piece over to one side.

From a tactical movement perspective, I REALLY liked this layout.

You would get about 6-8 tables of the same style (Desert, snow, crystals, whatever...), and then the style would change.

But the layout would remain essentially the same.

Problem is though, none of this terrain was really LOS-blocking for anything larger than an infantry model. So Dark Eldar were obviously screwed over by it. Trying to hide from a Leafblower IG build? Good luck buddy...

About 1 in 6 of the tables was just strange, like this one. Thank god I never had to play on one of these. I would never have been able to move my tanks at all. But as strange/bad as these were, they were also standardized. Though they were scattered around at the heads of table rows instead of in 6-8 table runs like the other terrain styles.

There was a short run of tables around the 100 mark that didn't follow the standard plan, but had enough height to hide things behind. These looked really cobbled together in comparison to the rest.

And this one... How are you supposed to play in or around a huge intact building like that? These seem stripped off of someone's diorama, and not like pieces of playable tourney terrain.

Overall, in terms of expectations, I give the Adepticon terrain a B+. Better than I expected, but not really fair to all armies. The standard layouts need some higher LOS-blocking pieces added in, while the non-standard layouts just need to go away.
posted by SandWyrm at 12:51 AM